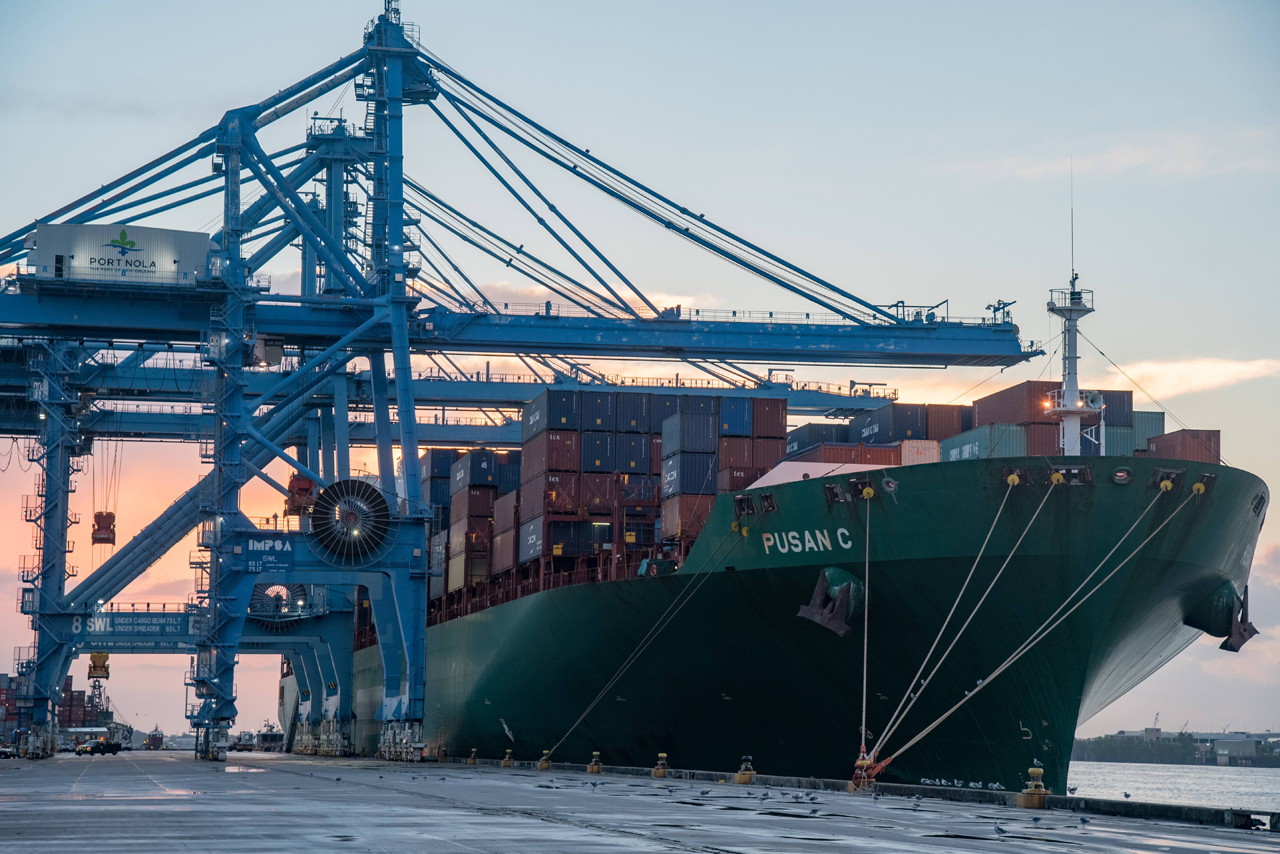 The CMA CGM Pusan C vessel is one of the largest vessels to date that calls at Port NOLA’s current container facility at the Napoleon Avenue Container Terminal. (Port NOLA)

The Port of New Orleans (Port NOLA) reports that it is set to begin the due diligence process for a potential $1.5 billion multimodal container terminal to serve the largest container vessels calling in the Gulf of Mexico.

Following unanimous approval at the Dec. 17 regular meeting of the Board of Commissioners, Port NOLA intends to acquire property in St. Bernard Parish and begin a two-year due diligence and permitting period that will include robust community engagement.

“Three months ago, the U.S. Army Corps of Engineers launched a landmark project that will dredge the Mississippi River to a depth of 50 feet, from the Gulf of Mexico to Baton Rouge,” Louisiana Gov. John Bel Edwards said. “The Corps believes that work will pay for itself quickly by bringing larger vessels and more commerce to our state. I applaud the Port of New Orleans for investing in Louisiana’s future through key container terminal improvements. Port NOLA’s vision will greatly increase our global container business, support our industries, attract new logistics investment to Louisiana and secure quality jobs for our people.”

Port NOLA’s container volumes more than doubled in 10 years with double-digit growth in 2018 and 2019. Recognizing the need for additional container capacity, Port NOLA is investing $100 million-plus to add four new 100-gauge gantry cranes and associated improvements in its current container facilities. However, an additional terminal is also needed to handle projected volumes and support the evolving needs of the shipping and logistics industry. A new terminal would complement the port’s existing Napoleon Avenue Container Terminal by exceeding water draft levels and completely eliminating air draft restrictions.

“Providing the next generation of critical infrastructure which meets the needs of our container carrier partners and provides economic prosperity for St. Bernard Parish, our region and the State of Louisiana is Port NOLA’s number one priority,” said President and CEO of the Port of New Orleans Brandy Christian. “This property acquisition and due diligence process is an exciting step forward. Our Strategic Master Plan identified the opportunity, and we are working hard to move forward with a project that provides regional and statewide benefits.”

The property acquisition is expected to be completed by Dec. 31, which launches a due diligence and community engagement process commencing in early 2021.

In addition to the six Class I’s listed above, Port NOLA is served by the New Orleans Public Belt Railroad (NOPB), which it owns, as well as the New Orleans & Gulf Coast Railway, Railway Age’s 2016 Short Line of the Year.