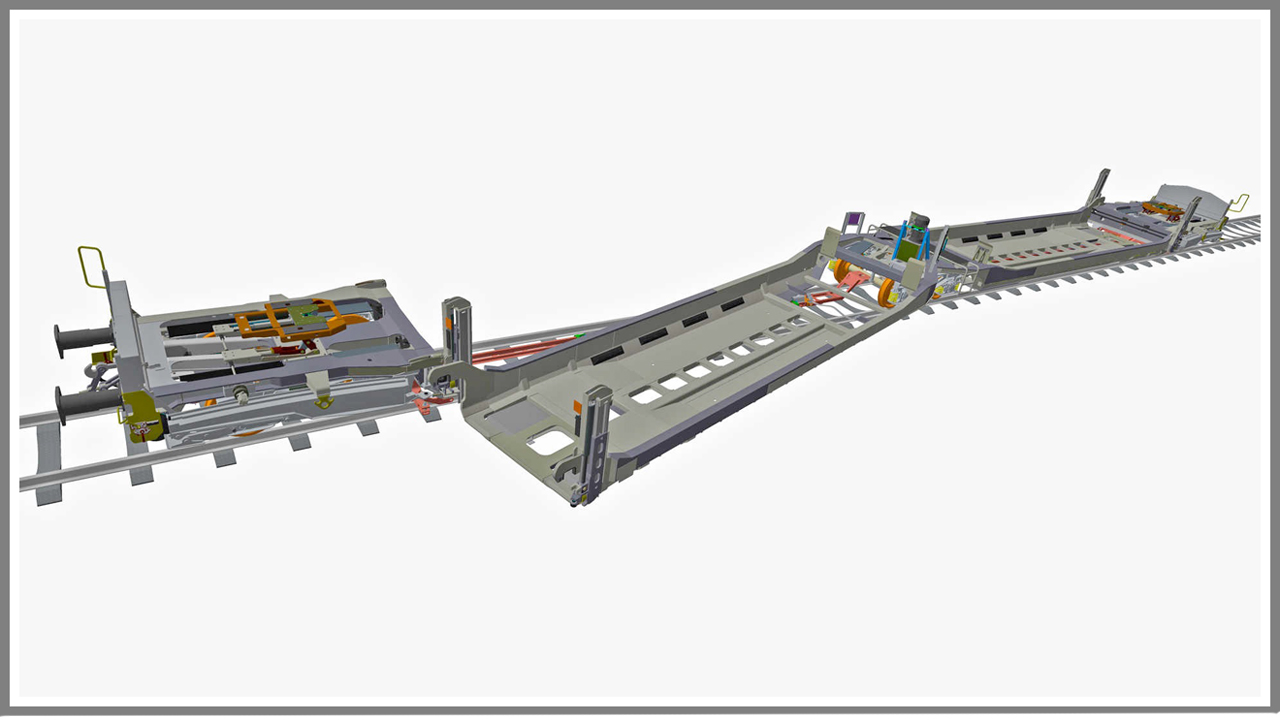 An intermodal platform railcar developed at the turn of the century looks set to finally come into its own, as a new service, an innovative loading/unloading semi-trailer method called Megaswing, launches to improve intermodal freight movements between Germany and Austria.

Frankfurt, Germany-based Helrom plans to use Megaswing to carve itself a place in the intermodal market. The company is looking to launch a service that it says solves two of the major problems faced by multi-modal operators: carrying a wide range of semi-trailers and reliable delivery.

As the European Union looks to transfer more freight from road to rail and waterways, Helrom is due to launch a freight service at the end of April 2020, operating six days a week between the port of Duisport in Duisburg, Germany, and Vienna, Austria, using Megaswing railcars capable of carrying all types of semi-trailers.

Transporting semi-trailers by rail is a difficult task that often requires specially designed trucks that can be craned onto the train, or carrying the tractor unit along with the trailer. The Megaswing railcars were developed by Kockums Industries in Sweden in the early 2000s, but were not readily adopted by operators, partially due to the economic downturn in 2008 and 2009 that saw large numbers of railcars sitting idle across the continent as freight numbers dropped.

Helrom acquired the Megaswing product and patents in 2019, and the operator now has a fleet of 18 units on order that it will use on the route. The company, headed by CEO Roman Noack and Chairman Keith Heller, was launched in 2017. Noack got his start in the freight market in Germany, working 10 years  German Rail (DB). Heller was head of British rail freight operator EWS (English, Welsh & Scottish) from 2004 to 2011. DB Cargo acquired EWS in 2005.

The Duisport – Vienna service, consisting of 20 railcars carrying up to 40 semitrailers, will depart at 10:00 PM, with a transit time of 19 hours. Noack says this has been calculated to allow enough leeway for unforeseen events to ensure the service always arrives on time. “You have a fixed timetable that is always the same over the years, and you stick to that timetable under any circumstances,” he says. Helrom will lease or rent the locomotives needed for the service, supplying the engineers itself. The company will also maintain the railcars in-house.

Loading and unloading the Megaswing does not require any additional infrastructure such as a loading ramp, apart from a large paved surface and a generator. To load the car, hydraulic supports are lowered for stability, before the base is swung to the left or right. The semi-trailer is then backed onto the platform, which is then swivelled back onto the car and lowered slightly to lock it into place. The supports are then raised, with the operation taking around three minutes to complete.

Around €10 million has so far been invested in the project, with the capital coming from a number of countries, among them the United States. Helrom says it has also adopted “American-style” business principles to ensure the freight train runs strictly according to schedule.

While the Megaswing previously had trouble with adoption into normal traffic, Noack says he is convinced that now is the right time to introduce a service. Rail’s share of freight in Germany is currently around 17%, but the German government has set a goal to increase this to 26%. The European Union is also aiming to speed up the process of shifting a “significant amount” of the 75% of freight carried by road to rail and waterways.

The Duisburg – Vienna service will be the start of a European-wide network. Helrom has identified 50 corridors to introduce the service to by 2026. This network would extend from Stockholm in the North to Rotterdam in the West, Perpignan in the South and the Bulgarian-Turkish border in the East.

Of the 75% of freight in Europe currently transported by road, around 78% of this in non-craneable trailers that cannot be loaded onto railcars. Almost 25% of these trucks travel more than 300 miles across Europe. Noack says capturing even a small percentage of this market would allow Helrom to ensure “enormous growth.”

*“It Don’t Mean a Thing, If It Ain’t Got That Swing!” is a 1931 jazz composition by Duke Ellington. The lyrics were written by Irving Mills. It is now accepted as a jazz standard, and jazz historian Gunther Schuller characterized it as “now legendary” and “a prophetic piece and a prophetic title.” Ellington composed and arranged the music in August 1931 during intermissions at Chicago’s Lincoln Tavern, and first recorded it with his orchestra for Brunswick Records  on Feb. 2, 1932. After Mills wrote the lyrics, Ivie Anderson sang the vocal, and trombonist Joe “Tricky Sam” Nanton (with his signature plunger- and cup-muted sound) and alto saxophonist Johnny Hodges played the instrumental solos. The song became famous, Ellington wrote, “as the expression of a sentiment that prevailed among jazz musicians at the time.” Ellington credited the saying as a “credo” of his former trumpeter, Bubber Miley, who was dying of tuberculosis at the time; Miley died the year the song was released. The Ellington band played the song continually over the years, and recorded it numerous times, most often with trumpeter Ray Nance as vocalist. Ellington’s 1932 recording was inducted into the Grammy Hall of Fame in 2008. — William C. Vantuono