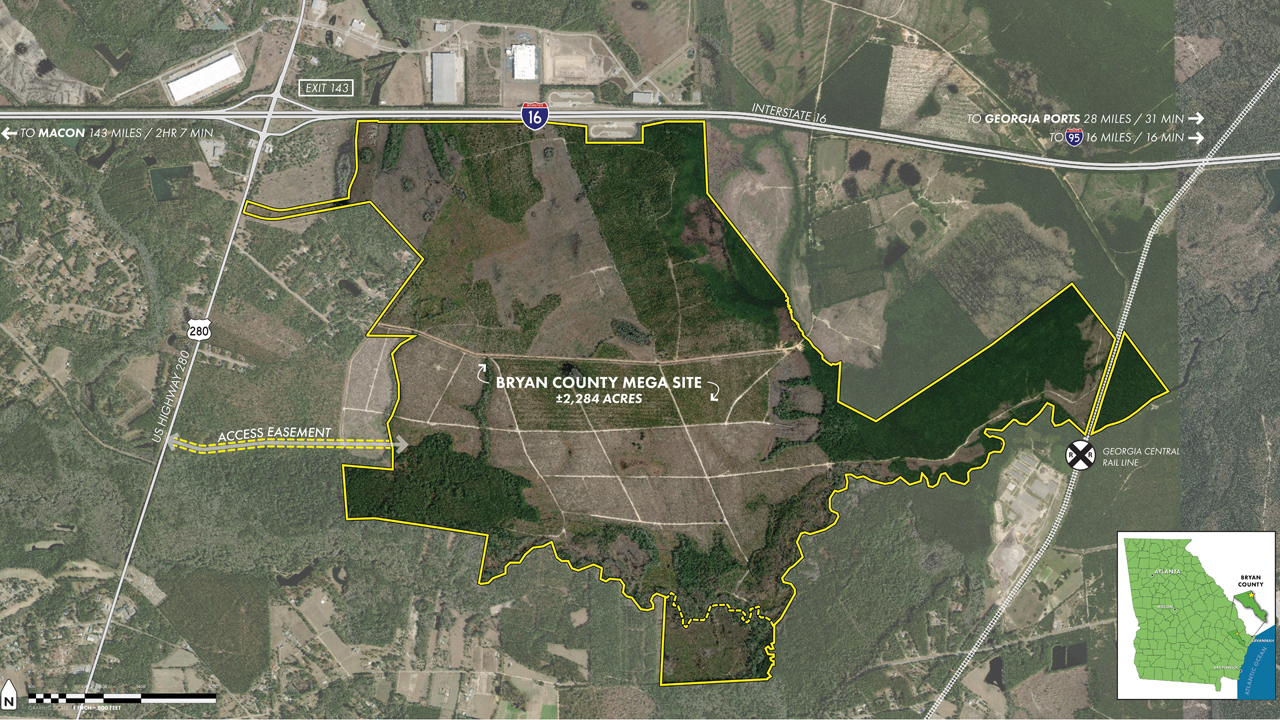 The Bryan County (Ga.) Mega-Site offers “more than 2,000 acres, rail that runs along the property line, and immediate access to interstates 16 and 95 and the Port of Savannah,” Savannah JDA Chairman Carter Infinger said.

The state of Georgia and the Savannah Harbor-Interstate 16 Corridor Joint Development Authority (JDA) are purchasing the 2,284-acre Bryan County Mega-Site, which is less than 30 miles from the Port of Savannah and offers direct access to Georgia Central Railway, with connections to CSX and Norfolk Southern (NS); the Ceres Global Ag Corp. will build a $350 million integrated canola processing facility in Northgate, Saskatchewan, with a direct connection to BNSF.

The Bryan County Mega-Site purchase is expected to close on or before July 31, 2021, and will be funded by the recent sale of Chatham County Economic Development Site to Amazon, according to the Office of the Governor. Located in a military zone, the mega-site includes three parcels: The Mock Tract, Samwilka Inc. Tract, and the Butler Tract, LLC.

“The Savannah Harbor-Interstate 16 Corridor Joint Development Authority has been focused on the Bryan County Mega-Site for the last six years,” Savannah JDA Chairman Carter Infinger said. “With more than 2,000 acres, rail that runs along the property line, and immediate access to interstates 16 and 95 and the Port of Savannah, this site is the premier mega-site in the state of Georgia and the Southeast.”

“This new mega-site, with immediate proximity to multi-modal freight infrastructure, is a tremendous new asset in Georgia’s economic development toolkit,” Georgia Ports Authority Executive Director Griff Lynch said. “The Georgia Ports Authority looks forward to continuing our partnership with the Georgia Department of Economic Development and local development authorities to use this and other assets to create jobs and prosperity for our state and communities throughout the region.”

“We have been analyzing canola crush at Northgate for several years as its location along the Canada-U.S. border is ideally located to originate canola seed from our farmer partners, and with a direct connection to BNSF Railway, it provides the most efficient access to the U.S. market and U.S. ports,” Ceres Global President and CEO Robert Day said. “Our Northgate facility includes a 2.7 million bushel shuttle loading grain elevator and two 120-car loop tracks, providing ‘construction-ready’ infrastructure and shortening the timeline to complete this project.”

“Northgate has a unique location, both in Canada’s canola growing region and with direct rail access to the major renewable diesel and food processing markets via BNSF’s network,” said BNSF Director of Agricultural Development Jim Titsworth. “This allows Ceres-produced canola oil to have an advantage in this rapidly growing marketplace. That same network also results in advantaged animal feed market access for canola meal. BNSF is excited to add this facility to its growing customer investments in the renewable diesel market.”