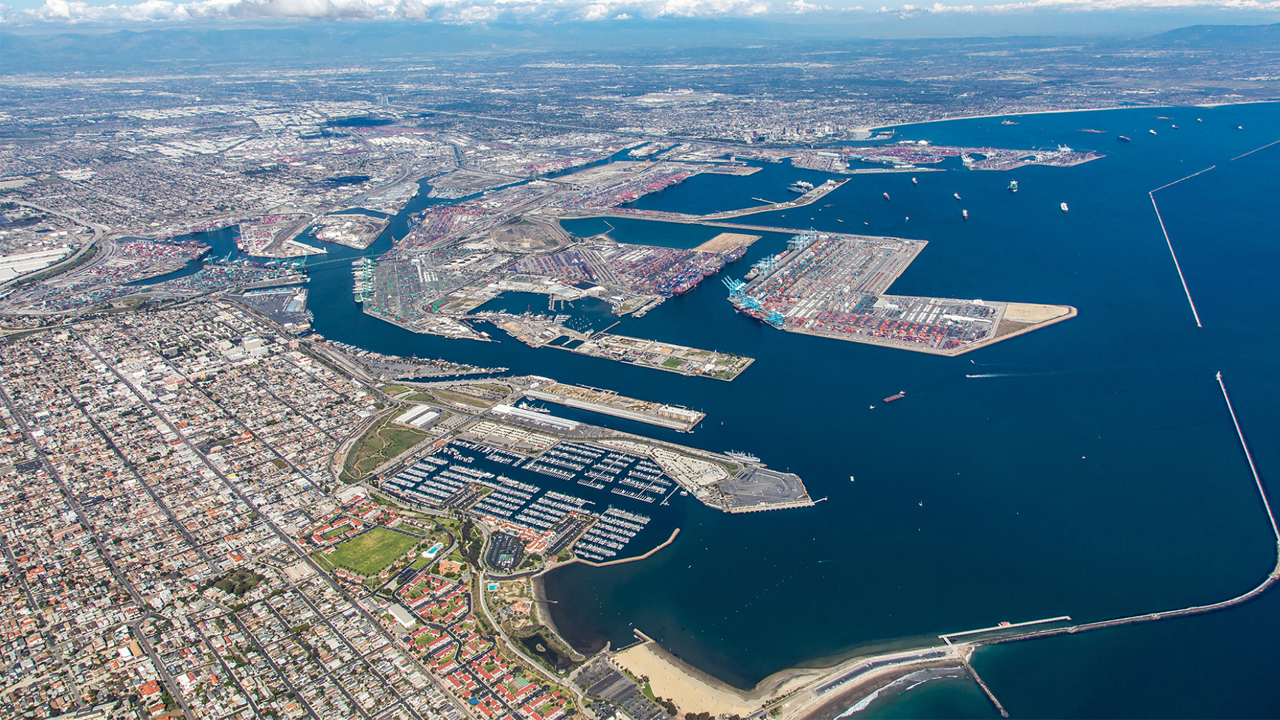 The ports of Los Angeles and Long Beach in California report 2022 as their second-busiest year on record. Also, South Carolina Ports (SC Ports) announces a record 2022 with the most containers ever handled at the Port of Charleston. All provide their outlook for 2023.

The Port of Los Angeles has reported cargo volumes of 9.9 million TEUs (twenty-foot equivalent units) for 2022, down 7.18% from its record-setting 10.7 million in 2021. During calendar year 2022, the Port moved a total of 5 million loaded imports and 4.9 million loaded exports.

Port of Los Angeles Executive Director Gene Seroka announced the cargo volumes during his Jan. 19 State of the Port address. “Through last July, we saw over two years of unprecedented volume, averaging a peak season month, every month,” he reported. “We started 2022 at that same frenetic pace, with 109 vessels in our queue. Yet, we ended with a disappointing 20% decline that began last August. That was triggered by an early peak season; shifting of cargo to the East and Gulf coasts; and now, more recently, a nationwide slowing of imports. Still, even with all that, nearly 10 million container units crossed our docks, making 2022 our silver medal year, the second best in our 115-year history.”

Seroka also outlined Port priorities for 2023. He said the Port will continue drive efficiency through technology, announcing that it will work with Wabtec and other stakeholders to develop three additional modules for the Port Optimizer™ digital tracking portal. One will focus on the export community, giving them “better lines of sight on their outbound shipping services, so they don’t incur costs that hurt their bottom line”; another will be a Port-wide truck reservation system to help speed turnaround time and reduce emissions from idling; and the third is a “unique interface that shares data on warehouse conditions across Southern California” to improve planning for delivery and pickup at these facilities, he reported.

“Data infrastructure gives us tremendous insight into supply chain issues, trends and process improvement opportunities which were simply not available before,” Seroka said. “These new tools will add to the stability and growth of America’s global trade.”

Seroka also discussed what he termed “workforce infrastructure” for improving the quality of life of the Port’s surrounding communities. The Port in 2023 will roll out a Workforce Initiative, focusing on providing career and economic opportunities for a broad range of workers, and will continue work on its planned Goods Movement Training Campus, a collaboration with the Port of Long Beach (POLB) and the California Workforce Development Board dedicated to worker skill development, up-skilling and re-skilling for port-specific jobs.

“Our Workforce Initiative will serve as a roadmap to fill the training and recruiting needs that exist today, as well as guide us as we navigate the needs of the future, including training to work in a zero-emission technology environment,” Seroka said.

According to Seroka, the Port will also continue development and deployment of zero-emission cargo-handling and other equipment, as well as deployment of more “clean” trucks funded by the Clean Truck Fund Rate. Additionally, he announced the Port will be part of a statewide coalition that will apply for a $1.4 billion U.S. Department of Energy grant to establish a green hydrogen hub at the San Pedro Bay port complex. All these projects, he said, are aimed at helping the Port achieve its goals of zero-emission cargo-handling equipment by 2030, and zero-emission trucks by 2035.

“A rise in online purchases and aggressive efforts to transfer long-dwelling cargo off the docks bolstered trade moving through the Port during the first half of 2022, with monthly cargo records in January, February, March, April, June and July,” POLB reported. “Consumer spending cooled by summer due to rising prices driven by inflation, while vessel transfers between the San Pedro Bay ports and a shift in imported goods toward the Gulf and East coasts contributed to a softening of cargo volume during the second half of 2022. The easing returned the Port to normal operations by year’s end. Economists are forecasting a further decline in cargo volumes through 2023 as consumers shift their purchases to services over goods.”

“Cargo is moving smoothly as we move past the economic effects of COVID-19,” POLB Executive Director Mario Cordero said. “In 2023, we will continue to invest in digital and physical infrastructure projects, focus on market share, and develop long-term improvements that will strengthen our competitiveness and keep goods moving efficiently.”

“Despite the challenges of the last two years, we have focused on longtime customer relationships and invested in projects that put us closer to a zero-emissions future,” Long Beach Harbor Commission President Sharon L. Weissman said.

“Major business announcements and expansions are happening in South Carolina, and we have strategically invested in critical port infrastructure to support the growth occurring today and into the future,” SC Ports Board Chairman Bill Stern said.

SC Ports reported that with support from the state, it has invested more than $2 billion into port infrastructure in recent years. “Investments thus far have yielded modernized container terminals with ample capacity, the deepest harbor on the East Coast at 52 feet and a strong rail-served inland port network,” according to SC Ports.

Construction is now under way on SC Ports’ Navy Base Intermodal Facility, a cargo yard in North Charleston that will be rail-served by CSX, Norfolk Southern and Palmetto Railways. “Creating near-dock rail at the Port of Charleston will make South Carolina more competitive as an import gateway to the United States,” SC Ports said.

SC Ports recently signed off on contracts valued at more than $100 million for design and construction of the Navy Base Intermodal Facility, for which a ground-breaking ceremony was held in October 2022.