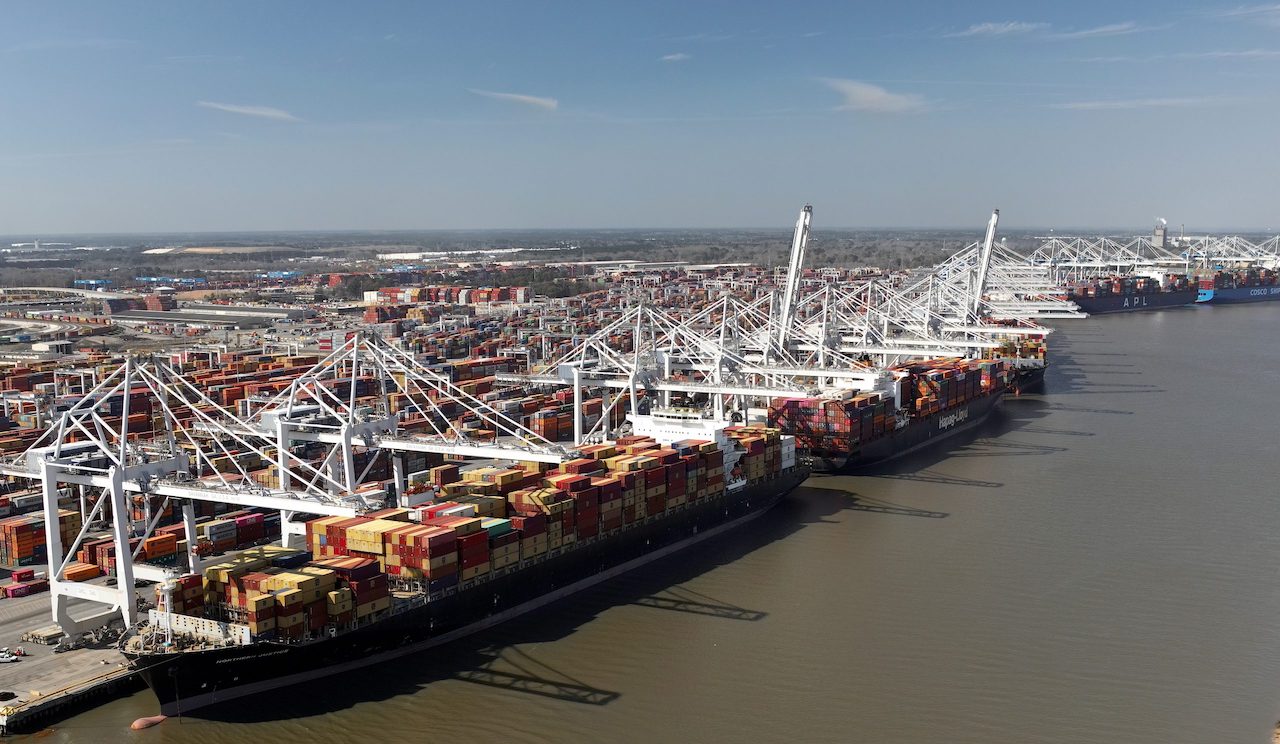 The Port of Savannah grew container volumes by nearly 10% in the first quarter of FY2023.

The Georgia Ports Authority (GPA) recently announced that it handled more than 1.5 million TEUs in the first quarter of FY2023 (July-September), an increase of 135,000 TEUs, or 9.6% over the same period last year. Contributing to the growth, according to GPA Executive Director Griff Lynch, was “the high number of ad hoc vessel calls, the addition of three new Mediterranean services and one new service to Asia.”

“Additionally, our regular services have been arriving with significantly more cargo destined for Savannah,” said Lynch.

Lynch said the average vessel exchange grew from 3,500 TEUs per ship this time last year, to 4,500 TEUs across the past three months. The Port of Savannah handled 776,067 TEUs of loaded and empty exports in the first quarter, while import trade totaled 766,525 TEUs. Loaded containers represented 70% of the total container trade.

“While we have seen powerful growth across the first quarter, we are beginning to see signs of correction in the market,” Lynch said, noting that September container volumes were off by 7.6%compared to the same month last year, at 436,279 TEUs. A nearly three-day suspension of vessel service related to Hurricane Ian impacted September volumes at the Port of Savannah.

“We’re expecting a gradual easing in demand based on several factors, including a shift in the balance of consumer spending away from goods and back to services, and the impact of inflation on the economy,” Wooten said. “After having increased trade at a compound annual growth rate of 14% over the past two fiscal years, this change will represent a return to a more typical rate of growth for GPA.”

“An easing of demand should help U.S. ports address vessel backlogs brought on by unprecedented import volumes,” Lynch said. The Port of Savannah, Lynch adds, expects to clear the need for vessels to wait at anchor by the end of November. Presently, approximately 204,600 containers are on the water headed for Savannah, down from a high of 262,500 in July.

SeaPort Manatee recently reported an increase of nearly 35% in containerized cargo tonnage for the just-ended fiscal year, according to figures released Oct. 13 by the Southwest and Central Florida trade hub.

“With safe, efficient movement of record levels of commerce, SeaPort Manatee keeps building upon its role as preferred gateway for delivering diverse cargos throughout Southwest and Central Florida and beyond,” said SeaPort Manatee Executive Director Carlos Buqueras. “As recovery and rebuilding efforts continue in the aftermath of devastation wrought in late September by Hurricane Ian, SeaPort Manatee is serving as a critical hub for providing fuels, lumber and other key goods.”

According to the port, petroleum products remain the largest commodity sector at SeaPort Manatee, with 1,493,883 short tons moving through the port in FY2022, up 18.6% from FY2021. That annual throughput equates to 404.6 million gallons of fuels.

Meanwhile, 420,582 tons of containerized fruits and vegetables moved across SeaPort Manatee docks in FY2022, an increase of 24.6% from FY2021, with cross-Gulf services of SeaPort Manatee-based World Direct Shipping and Latin American services of Coral Gables, Florida-headquartered Fresh Del Monte Produce Inc., carrying most of that volume. In addition, 520,212 tons–or nearly 125 million gallons–of fruit juice came through SeaPort Manatee in the latest 12-month period, up 14% from a year earlier.

“Working closely with industry partners in sustaining record levels of commerce, SeaPort Manatee continues to enhance its infrastructure, including through ongoing expansion of dockside container yard facilities, while offering more than 5,000 acres of on- and near-port properties for future development,” said Reggie Bellamy, Chairman of the Manatee County Port Authority. “At this crucial time for hundreds of thousands of storm-wracked Floridians, SeaPort Manatee is once again ably stepping up to meet demands.”

ITS Logistics, a logistics company that provides port and rail drayage services in 22 coastal ports and 30 rail ramps throughout North America, on Oct. 19 released its October forecast for the ITS Logistics US Port/Rail Ramp Freight Index, reflecting the current impact of the continued port and rail ramp disruptions nationwide, as well as a forecast for the fourth quarter. The October index reveals that the Gulf Coast Region is “preparing for further disruptions due to the impact of Hurricane Ian, the projected Gulf Hurricane season and several challenges facing Port Houston.”

“The Gulf Coast ports will be impacted the most this month. We currently see a lack of storage in Houston, as well as minimal chassis availability and vessel congestion at Houston area terminals,” said Paul Brashier, Vice President, Drayage and Intermodal for ITS Logistics.

“On the East Coast, empty container termination is still a significant challenge in New York and New Jersey, which is affecting available chassis and container storage,” said Brashier. “July 2021 marked the beginning of the eastern gateways experiencing an increase in mega-ships at their docks. This was a direct result of the congestion on the west coast and created a shift of imports. In a trickledown effect, this chain of events created prolonged dwell times at Charleston, Newark, Virginia and other east coast ports.”

According to ITS Logistics, the influx on the East Coast mixed with the existing delays on the west coast and influenced importers and forwarders to relocate business to the Gulf of Mexico. Consequently, as of this January the Port of Houston experienced a 27% rise in TEU tally year over year, because of increased container imports. Importers and forwarders are seeking relief in the Gulf because of the availability of drayage services and increased capacity, but ports, including Houston, Tampa and Savannah are being affected by delays because of the rising container numbers, ITS Logistics says. “This is resulting in a shortage of space, equipment and chassis,” the company added.

As for the West Coast, Brashier says that labor disruption probability is currently low because “both sides are still negotiating in good faith.”

“As well, the engagement from the White House and Congress on port and rail issues is high going into the mid-term elections,” Brashier added.

The ITS Logistics US Port/RAIL Ramp Freight Index, which is available for download below, forecasts port container and dray operations for the Pacific, Atlantic and Gulf regions.

The Port of Los Angeles handled 709,873 TEUs in September 2022, down 21.5% from the same month last year–the port’s busiest September on record–attributing the decrease to “high levels of retail and other inventory already on shelves and in warehouses.”

Closing out the third quarter, the Port of Los Angeles says it has processed 7,864,514 TEUs during the first nine months of 2022, about 4% down from last year’s record pace.

“Despite what will likely be a soft ending to 2022, we are on track to have the second-best year in our history,” Port of Los Angeles Executive Director Gene Seroka said at a media briefing. “More importantly, the cargo backlog that began last year has been nearly eliminated due to the diligent, combined efforts of our supply chain partners.”

Seroka was joined at the briefing by Jay Timmons, President and CEO of the National Association of Manufacturers. Timmons discussed the critical role the Port plays in delivering parts and components to factories throughout America.

Camden, N.J.-based supply chain solutions provider NFI announced Oct. 19 that it has added 200 intermodal containers to its growing Canadian fleet in September. The purchase, which includes a mix of refrigerated and dry van containers, “positions NFI as the largest private intermodal reefer carrier in Canada, second only to CN and CP,” the company said. The investment in Canada lifts the company to more than 500 owned intermodal containers.

NFI says it will continue to invest in its intermodal business in both the U.S. and Canada as the share of market between truck and intermodal undergoes a re-balancing through 2023. The company attributes “providing flexible, nimble solutions to its customers” as the main driver behind the venture. The addition of the new assets, NFI says, allows the company to scale its multi-modal operations, which offer LTL, multi-stop LTL, FTL, multi-stop reefers, and brokerage, amongst other custom solutions.

“I’m extremely excited about scaling NFI’s intermodal offerings to be more responsive to the challenges that the market and the wider supply chain have thrust upon us,” said NFI Senior Vice President of Intermodal Mark McKendry. “It is through cooperative customer partnerships and NFI’s collaboration with rail and drayage carriers that has facilitated such a significant investment in the Canadian operation. Our commitment to customers remains clear: deliver the best possible rail service with the most value for our Canadian shipper-partners, while further detangling the complexities of consuming Intermodal in Canada.”

According to McKendry, the company’s investment is “in line with NFI’s long-term Canadian growth strategy, which extends past its intermodal investment.” The company currently provides dedicated fleet solutions in Canada via a mix of 140 company owned tractors and independent contractors. Additionally, NFI operates 2.3 million square feet of warehousing space in the country and offers a full suite of non-asset transportation solutions, including LTL, OTR and Flatbed.

Additionally, NFI, which was founded in 1932, is celebrating its 90th anniversary as “one of the oldest and largest privately held and family-owned 3PLs in North America.” According to the company, NFI “offers expertise spanning a variety of diverse industries, including food and beverage, retail and eCommerce, manufacturing, and consumer packaged goods.” In addition to intermodal, NFI’s full suite of solutions includes “dedicated transportation, distribution, eCommerce fulfillment, brokerage, transportation management, port drayage, global logistics and industrial real estate,” the company adds.