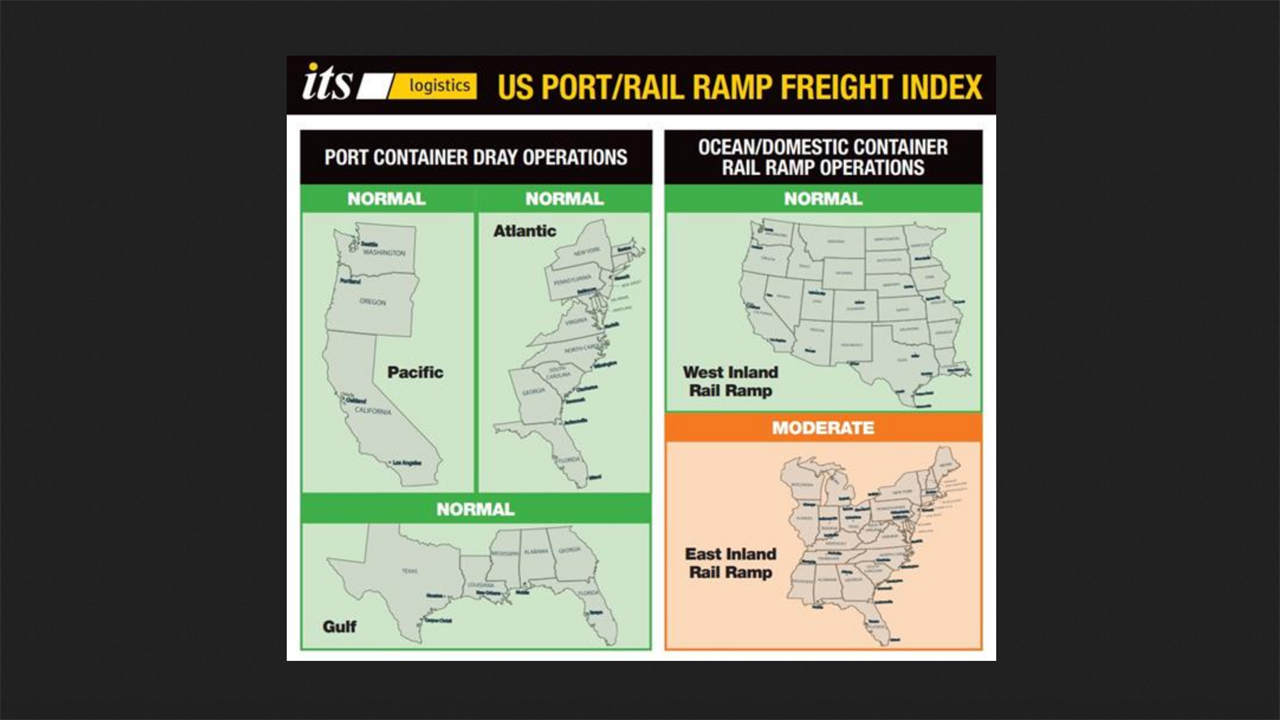 The January forecast for the ITS Logistics U.S. Port/Rail Ramp Freight Index reflects “a muted increase in inbound volumes due to the Lunar New Year, with a slight increase in container volumes,” according to the third-party logistics (3PL) firm, which provides port and rail drayage services in 22 coastal ports and 30 rail ramps throughout North America. “There is also cause for concern with inland ocean chassis at the rail ramps, as rail operations could be impacted by a lack of ocean chassis availability.”

The ITS Logistics US Port/Rail Ramp Freight Index forecasts port container and dray operations for the Pacific, Atlantic and Gulf regions. Ocean and domestic container rail ramp operations are also highlighted in the index for both the West Inland and East Inland regions. (Download January report below.)

“The Lunar New Year is once again approaching and as a result, we can expect to see a slight increase in container volumes, but it should not add any significant stress to U.S. Port operations,” said Paul Brashier, Vice President, Drayage and Intermodal for ITS Logistics.

The Lunar New Year—aka Chinese New Year or Spring Festival—marks the start of the year within the Chinese calendar. A seven-day public holiday in China, it will be held Jan. 21-27 this year.

“This time of year traditionally has an immense impact on the logistics infrastructure as China and other Southeast Asian countries temporarily shut down production facilities and operate transportation services with significantly limited personnel on hand,” said Brashier, who noted that a “bottleneck can be caused due to orders flooding in before the Lunar New Year and heavy delays can be experienced with goods exported from, as well as imported into, the countries that acknowledge the holiday. Both the Atlantic and Gulf regions are expected to experience higher than normal volumes as a result.”

Despite shipping ports and airports remaining open during the Lunar New Year, they will operate at a limited capacity, and the overall process of shipments being loaded and discharged may be delayed due to limited personnel and cargo deliveries, according to ITS Logistics. The trucking sector is expected to ramp up container transportation to and from the ports, the 3PL firm said.

Other potential disruptions to port/rail ramp operations in January: “The ILWU and Terminals have still not come to terms on a new contract,” Brashier reported. “Rail operations could be affected by a lack of ocean chassis availability as more volumes move IPI and move via rail further inland since the resolution of rail labor disputes. The ocean chassis availability is expected to potentially impact both the West and East Inland rail ramp regions.”

The South Carolina Ports Authority has signed off on contracts valued at more than $100 million for design and construction of a new facility in North Charleston, according to a Jan. 17 report by WCSC, Channel 5.

In October, a groundbreaking ceremony was held for the rail-served Navy Base Intermodal Facility, which will provide near-dock rail and inner-harbor barge operation to the Port of Charleston.

In partnership with Palmetto Railways, Class I railroads CSX and Norfolk Southern will utilize the new facility, which is located about one mile from Leatherman Terminal. Nearly 80,000 feet of track will create a capacity of one million rail lifts in phase one. Containers will be moved to and from the Leatherman Terminal on a dedicated road. Inside the intermodal yard, rail-mounted gantry cranes will lead containers on and off trains.

The South Carolina Ports Authority Board selected Landmark Construction to build sound walls, rail foundations, 11 processing tracks, and four arrival and departure tracks, WCSC reported. That contract is worth nearly $120 million. The Board “also unanimously voted to pay over $4.3 million to design around 15 miles of rail that would head south from the facility toward Charleston before wrapping back to North Charleston,” according to the news outlet.

In phase one, South Carolina Ports Authority President and CEO Barbara Melvin told WCSC, “We expect to be able to handle a million rail lifts, and as we move into phase two, which is the second part of the design, it moves to 1.3 million rail lifts.”

The first trains are expected at the facility in July 2025.