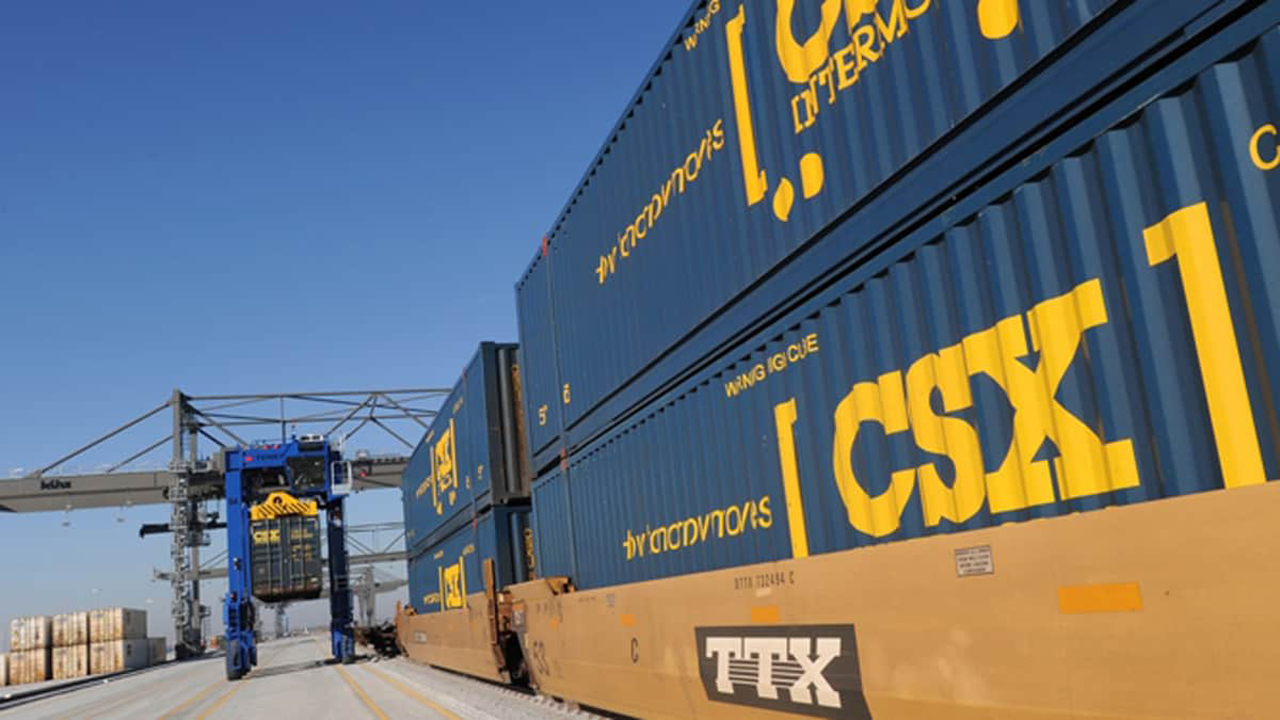 CSX President and CEO Jim Foote on Aug. 2 responded to Surface Transportation Board Chairman Marty Oberman’s July 22 letter to Class I railroad CEOs requesting information on the extent of congestion at key U.S. container terminals and on their railroads’ policies and practices for assessing container demurrage fees. Oberman cited reports of “substantial charges being levied by the railroads for container storage at these terminals.” Following is CSX’s full response:

This letter responds to your July 22 request for information about the international intermodal supply chain and the role played by intermodal terminals. Our intermodal team has provided responses to your specific questions, which are enclosed as Attachment A.

To put the information in Attachment A in its full context, I’d like to briefly address the role that CSX intermodal terminals has in the broader global supply chain. There is a sequential process that an international container shipment undertakes before reaching a CSX intermodal terminal and its ultimate U.S. inland destination. While intermodal rail terminals are important, railroads only facilitate the movement of international containers through its relatively small segment of the overall transportation pipeline. An intermodal terminal has a designed throughput capacity and CSX depends on receivers and steamship lines to maintain a relatively consistent flow of freight out of our facilities to accommodate the additional freight being moved in. Rail intermodal terminals simply transition containers off railcars and make them accessible for distribution to consumers—they were not designed for, and are not physically capable of, long-term container storage for significant volume.

The movement of an international container from a foreign country to a receiver in the U.S. starts with the fundamental decisions made by a shipper concerning whether to ship now, how much to ship, where to ship, how fast, and which steamship line to use. Each of these decisions have economic consequences that are reasonably foreseeable given the current state of the supply chain. Once these decisions are made, the shipper customarily relies on its selected steamship line to effectively serve as a logistics provider, putting in place all or most of the other segments of the chain. CSX, for example, has a contractual relationship with the steamship line—not with the shipper, receiver, port, chassis owner, or truck drayage provider.

If the shipper decides to ship from China to the United States, the first segment of the pipeline is the loading of goods into a steamship line-provided container at the shipper’s facility in China. This is followed by the truck dray to the Port of Shanghai, which is arranged by either the shipper or the steamship line. Customs clearance, physical inspections, and port handling precede the container being placed in the cargo hold of a container ship. The steamship line selects the destination port of call, plans the sailing, and transports the container from the Port of Shanghai to a destination port, like the Port of New York/New Jersey, stopping at several interim ports over its roughly 25-day transit.

At the Port of NY/NJ, the container is offloaded from the container ship and staged for further inland transport by rail. The steamship line will have already selected an inland rail carrier, in this case CSX, and a rail waybill will have been created with the steamship line as both the freight payer and the shipper. Further customs clearance, physical inspections, and port handling precede the container’s placement on a railcar. After CSX moves the container to the inland rail intermodal terminal chosen by the steamship line, the unit is lifted off the railcar and positioned for pickup, either on a chassis or in a stack easily accessible by lift equipment. Finally, CSX notifies the receiver identified on the waybill that the container is available and a drayage truck, arranged by the receiver or steamship line, removes the container from the rail terminal and delivers it to the receiver’s facility. Here, the receiver coordinates receiving capacity, including warehousing, dock space, and labor, in order to unload the container, so that the empty container and chassis can be used by the next international shipper. Some of our customers do a better job than others of managing a constant flow of containers into and out of our terminals.

Tens of thousands of international containers make their way to CSX’s inland rail terminals each month and before many of those units flow out of CSX’s piece of the global supply chain, more are on their way. Ports, steamship lines, and shippers alike depend on CSX’s ability to support freight flows through its intermodal terminals. CSX provides space for international chassis pools, as well as limited free time for customers to keep containers at CSX terminals while awaiting pick up.

We work hard to optimize the movement of freight over our railroad and at the terminal, but we cannot be held accountable for the informed and calibrated decisions shippers are making to ship and that receivers are making as to their capability to receive. Nor can we be held responsible for the inefficiencies that exist in other parts of the supply chain.

In order to maintain an efficient and fluid terminal environment, CSX relies on a per day fee for customer storage of containers at a CSX intermodal terminal or ramp facility when the container exceeds the applicable free days. The purpose for intermodal terminal demurrage is to incentivize shippers, receivers, and transportation intermediaries to manage their timing, flow, and volume of containers across the oceans, as well as coordinating these flows with sufficient chassis, truck drayage, warehouse, and off-site container storage facilities at inland destinations. Because excess storage of containers is an imposition on CSX’s property, the terminal demurrage also allows CSX to be compensated for that use. Our preference is to have fluid terminals and not charge demurrage at all—but it’s nonetheless a vital and effective means of advancing the flow of assets out of our terminal.

If demurrage were eliminated or capped, making storage effectively free at a certain point, we would stand out as a cost-free storage facility during times of high demand and our terminals would quickly reach capacity. In that case, the only practical recourse would be to restrict or stop the flow of containers to our intermodal facilities. The impact of such an action would be significant, likely causing ripples backwards through not just the international intermodal supply chain, but across multiple supply chains. Congestion and gridlock at our nation’s seaports caused by a backlog of intermodal freight would affect rail, non-rail, import, and export freight alike. Just as rail terminals are not designed for long-term storage, neither are port facilities.

CSX does not engage in international supply chain management nor do we provide steamship, port or drayage services, chassis assets, container storage depots, or warehousing. Short of limiting upstream port and vessel flows to inland markets, storage charges are the railroads’ principal tool for ensuring that shippers and receivers clear containers from our intermodal rail terminals, which allows us to keep the flow of inbound containerized freight moving through U.S. container ports and into our economy.

Thank you for the opportunity to share my perspective on this important topic. My team and I would be glad to further discuss the role that our intermodal terminals provide in the global logistics chain.

A fee increase of $100 may be applied to each of the Day 2-7 fees during peak season periods upon 30 days’ notice to shippers. This peak season adjustment was established in 2018 and has remained unchanged.

4) Any fee “caps” that are currently in place and how long those caps are expected to remain in place: CSX does not have fee “caps” in place.

6) A description of efforts made, if any, to reduce storage charges where delay is not within the control of the shipper or receiver: Throughout this exceptional surge in market conditions, CSX has maintained open gates at our terminals, we have maximized our ground capacity and re-positioned containers to several off-site container yards when possible, and continue to leverage all available on-terminal space for customer cargo. CSX’s efforts in Chicago are an example of how we addressed terminal fluidity and improved productivity in order to process additional business. Terminal realignment in that market—shifting a large portion of international traffic out of Bedford Park into our 59th Street terminal and shifting a correspondingly large portion of domestic traffic from 59th Street to Bedford Park—allowed us to better segment international and domestic traffic, driving improved efficiencies on key assets such as railcars and chassis.
CSX is also fully engaged with customers on the issue of container dwell. We routinely provide them with reports and discuss volume forecasts to optimize planning. Additionally, we communicate with East coast ports on a daily basis to further plan current and projected flows. Reservations are another way CSX maintains terminal fluidity by aligning inbound volume with available train capacity.
When CSX is at fault (e.g., IT issues, equipment failure, etc.), CSX grants relief from demurrage and in other instances where demurrage is disputed, the particular circumstances are carefully reviewed on a case-by-case basis.

8) Please describe your policies and practices of assessing storage charges, including the circumstances under which relief can be granted or charges can be excused, and whether charges are imposed even when the receiver is powerless to avoid a delay in retrieving a container: As discussed above, CSX’s policies for assessing demurrage charges for intermodal shipments are published on the CSX Directory, which provides clear notice to shippers and receivers as they make their informed business decisions on whether and when to ship and receive. CSX’s demurrage policies and practices are longstanding, foreseeable and well-understood by shippers, receivers and steamship lines. If a CSX intermodal terminal is not the right fit for a shipper or receiver, they can direct the steamship line to avoid our intermodal terminals, although we believe our commercial terms are reasonable, competitive and aligned with the value of the services provided.
Receivers are not without recourse to reduce or avoid intermodal demurrage. They often take a number of varying actions, such as increasing communication with their shippers on their capacity constraints and establishing protocols, such as reservation systems, to better align inbound containers with their chassis resources and plant capacity. Receivers can negotiate and contract for demurrage costs to be passed onto others, such as shippers, steamship lines or its own customers. Receivers can also increase their monitoring and control of the pipeline of inbound containers so that they have resources in place when those containers arrive. Receivers can also hire weekend crews or make investments to turn equipment faster.
It can be the case that some receivers may choose to incur demurrage charges rather than making investments or operational changes to avoid such charges. Receivers have the right to make the economic choices that make sense for their businesses just as railroads have the right to use demurrage in a manner they feel minimizes the harm that excessive dwell can cause to CSX, to other CSX customers, and to the global supply chain.