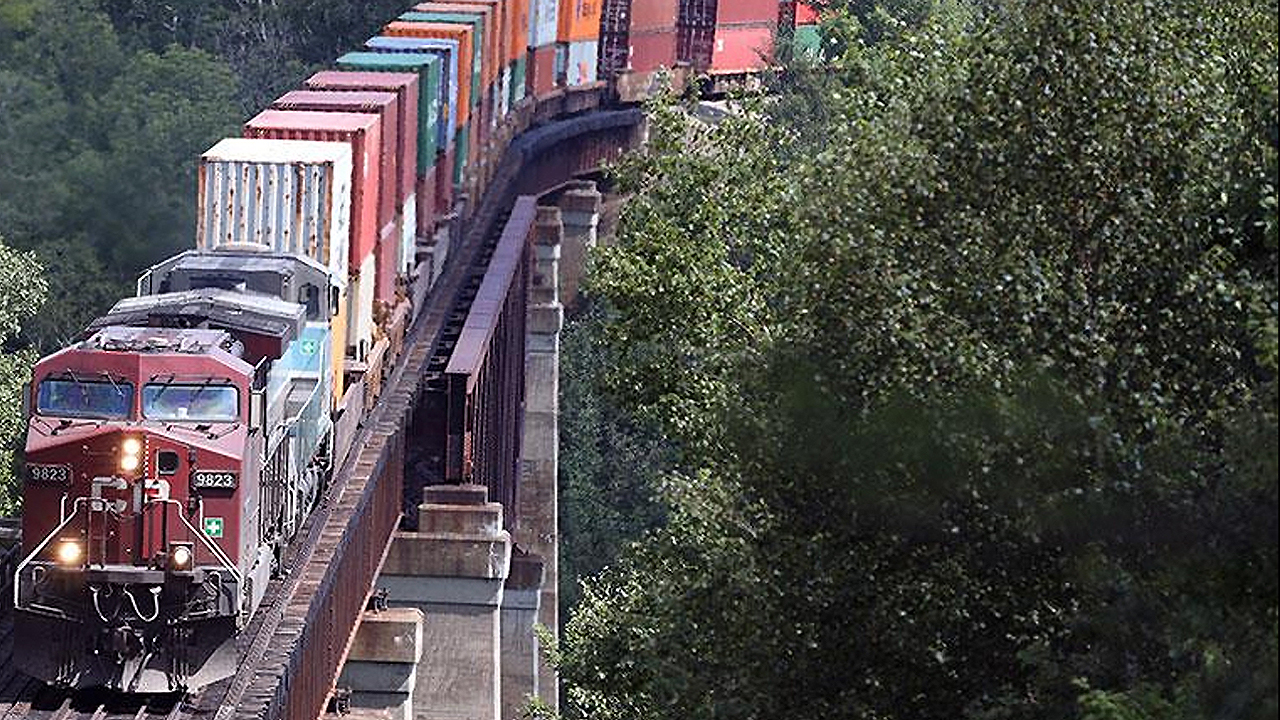 Canadian Pacific (CP) officially launched its international intermodal service through the Port of Saint John, N.B. the morning of Aug. 11. The inaugural train carried containers from the Hapag-Lloyd vessel Detroit Express bound for intermodal terminals on the CP network in Canada and the U.S.

CP originated westbound train 251-11 for the Montreal region at Brownville Junction, Maine, with the first Port of Saint John containers on connection from the New Brunswick Southern (NBSR) and Eastern Maine (EMRY) railways. From Montreal, CP will move containers from the vessel Detroit Express on connecting trains to destinations that include Toronto, Winnipeg, Calgary, Edmonton, Vancouver, Chicago and Minneapolis.

The first eastbound intermodal train to the Port of Saint John departed Montreal on Friday, Aug. 7.

CP gained access to the Port of Saint John via its purchase of the Central Maine & Quebec Railway (CMQ), completed in June. CP “has committed to investing $90 million over three years into the CMQ property to enhance safety and efficiency over the corridor. Complementing that investment is the port’s $205 million West Side Modernization project, which includes a new wharf, a terminal upgrade and a deeper shipping channel.”

CP said it anticipates that by year’s end it will be able to offer 24-hour service between Saint John and Montreal.

“The new Port of Saint John service offers shippers a compelling value: a congestion-free port with a world-class operator, matched with CP’s Precision Scheduled Railroading model,” said Keith Creel, CP President and CEO. “CP has been without access to a deep-water Atlantic Ocean port for a quarter-century, and today I’m pleased to deliver a simple message: We’re back.”

“The Port of Saint John connection gives us the rare opportunity to offer shippers a truly new and extremely compelling service to reach North American markets,” said Jonathan Wahba, CP VP Sales and Marketing Intermodal and Automotive. “With a world-class terminal operator in DP World and CP’s investment in the CMQ, our customers will enjoy an unmatched value proposition that will benefit beneficial cargo owners for years to come.”