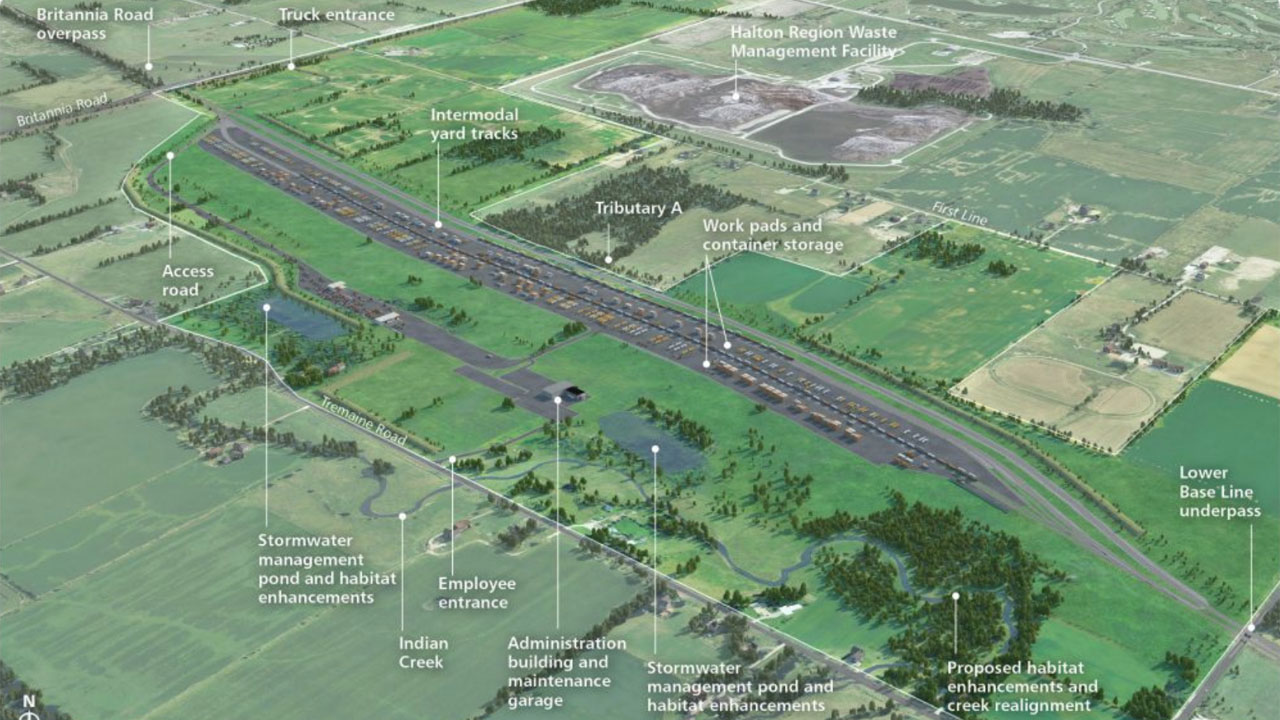 CN’s proposed C$250 million logistics hub/intermodal facility, to be built in Milton, Ontario, has received approval from the Canadian government. The catch: The project is subject to 325 conditions, which would make it the most stringently regulated intermodal logistics hub in Canada.

In an Environmental Assessment Decision Statement, Minister of Environment and Climate Change Jonathan Wilkinson established the legally binding conditions on CN, many of which go beyond those initially proposed by an independent joint review panel in early 2020 and 40 of which specifically address air quality, according to the Impact Assessment Agency of Canada. Others address effects on human health, groundwater and surface water, migratory birds, species at risk, fish and fish habitat, the use of lands and resources by Indigenous peoples, and physical and cultural heritage.

CN would also be required to limit truck traffic to 800 vehicles per day entering the site (averaged on a monthly basis); and to install a community liaison, establish a communication process, document and respond to community feedback, and identify and address potential traffic and road safety impacts, according to the Impact Assessment Agency of Canada.

The Agency noted that it will enforce the conditions, and any project changes will need to be considered by the Minister through an amendment process to determine if they can proceed. Going forward, CN would also be required to obtain all necessary authorizations and/or permits, including an approval from the Canadian Transportation Agency under the s. 98 of the Canada Transportation Act.

The facility—including a rail yard with more than 12 miles of track and 1-mile-long truck entrance road and queuing area—would handle four intermodal trains per day, according to CN, and add “much-needed inland intermodal capacity in the Greater Toronto Hamilton Area.” It would complement the Class I railroad’s existing Brampton Intermodal Terminal (BIT).

CN announced in 2015 its plan to build the hub adjacent to its main line and approximately 30 miles west of Toronto. Since then, community members, Aboriginal groups and local governments have raised environmental and other concerns, and the railroad has worked to engage and consult with them. In 2016, CN submitted an Environmental Impact Statement (EIS) and a formal application to the Canadian government.