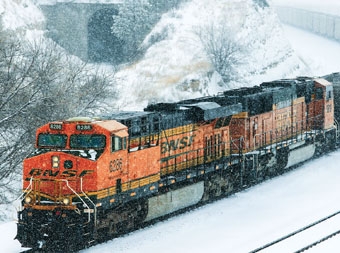 BNSF says it will go into the 2014-2015 winter season “better prepared than ever before, especially if the U.S. experiences a return of the polar vortex. The 2013-2014 winter was one of the most severe winters the U.S. has experienced in decades, with extreme temperatures that persisted for long periods and created special challenges for operating the railroad.”

“While we always prepare the operations for winter, the extreme cold experienced last year provided us some additional insight that we have incorporated into our future preparations and operating procedures,” said BNSF Executive Vice President and Chief Marketing Officer Steve Bobb. “We know that customers depend on BNSF for reliable freight transportation. While unplanned events can always happen, we will go into this winter season with more resources and more preparation than ever before so that our people stay safe amid the harshest of weather conditions and our customers’ freight gets to its destination as promised.”

• Taken inventory of snow removal equipment and supplies, such as emergency generators and salt supplies (BNSF has salt domes at its intermodal facilities that hold between 450-650 tons).

• Tested specialized snow removal equipment to make sure it works properly. For example, snowfall in excess of eight inches will activate pushers and blade and salt trucks.

• Reviewed winter weather operational procedures on when to adjust crew transportation procedures so that moving a crew from one location to another using crew vans is eliminated in favor of allowing crews to remain overnight at crew change locations as well as when to adjust train size, speed, and other operating restrictions.

• Growing its rapid response teams that are dedicated to addressing service interruptions that may be caused by a variety of mechanical or operational issues, including winter weather.

• Increasing mechanical rapid responders by 25%. The increase in manpower comes in the form of nine new rapid response teams, each made up of four rapid responders strategically positioned across the heavily congested northern regions of BNSF’s network from the western part of North Dakota in Dickinson to Chicago. BNSF will also position teams in the northern part of North Dakota in Williston and New Rockford as well as in La Crosse, Wisc.; Savanna, Ill.; Fort Scott, Kan., and Sterling, Ill.

• Establishing after-hours track rapid response teams to assist with snow removal across the northern part of its network, by keeping more than 300 additional maintenance-of-way employees who were traditionally furloughed during the winter season. BNSF has also established similar after-hours teams on key corridors across the central region.

• Expanding container and trailer parking capacity by 800 spots at the Willow Springs, Corwith, and Cicero intermodal facilities in the Chicago area. The expanded parking will allow more containers to be staged when snowy conditions cause pickup and delivery delays for trucks that are bound for those facilities.

• Installing an additional 150 switch heaters at locations that previously did not have protection from cold temperatures (bringing the company’s total network count to nearly 3,000) to ensure remote controlled rail switches do not freeze and fail during extreme cold.

• Installing air dryers on all new locomotives to help reduce moisture that can accumulate in the braking system. Brake lines that freeze prevent a train from operating until ice can be removed. • Acquiring additional snow removal equipment with the most significant acquisitions being two industrial-size snow blowers that will be dedicated to keeping the hub facilities in Chicago free of snow and ice.