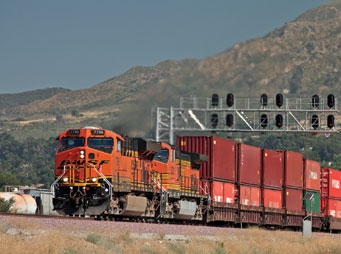 • Starting the grading for the construction of two double-track segments from Burk to Savanna and Aurora to Sugar Grove totaling 12 miles, to be completed in 2016.

• Replacing a bridge in Metropolis.

• Performing additional work related to the Chicago Region Environmental and Transportation Efficiency (CREATE) program. This year BNSF will focus on connecting the Chicago Subdivision at Western Avenue with the Chillicothe Subdivision at Ash Street.

• Expanding railcar loading/unloading tracks, support tracks, and parking at the Logistics Park Chicago intermodal and automotive facilities (located in Elwood), as well as at the Willow Springs Intermodal Facility.

BNSF’s maintenance program in Illinois will include 1,099 miles of track surfacing and undercutting work, replacement of 52 miles of rail and close to 93,000 ties, and signal upgrades for federally mandated PTC.

• Constructing double-track segments from Big Lake to Becker and from Little Falls to Darling totaling 13 miles, as well as starting to grade for a double-track project from Randall to Lincoln, to be completed in 2016.

• Installing CTC along the Monticello, Staples, and St. Croix subdivisions.

• Converting a section of track in the Dayton’s Bluff area of St. Paul to a third main line track.

• Building a new siding along the Noyes Subdivision.

BNSF’s maintenance program in Minnesota will include 269 miles of track surfacing and undercutting work, replacement of 125 miles of rail and about 427,000 ties, and signal upgrades for PTC.

Nebraska—An estimated $326 million for constructing two double-track segments on the Ravenna Subdivision between Bradshaw and Aurora and Pleasant Dale and Milford totaling 18 miles to improve capacity on this heavily-trafficked coal route. The maintenance program in Nebraska will include 2,014 miles of track surfacing and undercutting work, replacement of close to 55 miles of rail and about 214,000 ties, and signal upgrades for PTC.

• Continuing construction of double-track along the Glasgow Subdivision between Minot and Williston totaling 37 miles.

• Upgrading the connection track between the Hillsboro and Devils Lake Subdivisions.

• Extending the siding along the Dickinson Subdivision located between Mandan, N.Dak., and Glendive, Mont.

• Expanding the capacity and classification capability of Dickinson Yard to accommodate expected growth in single-car volumes.

BNSF’s maintenance program in North Dakota will include 1,164 miles of track surfacing and undercutting work, replacement of close to 97 miles of rail and about 393,500 ties, and signal upgrades for PTC.

• Constructing a southeast quadrant connection at Tenaha to facilitate the use of the Longview Subdivision for southbound trains heading to East Texas and Louisiana.

• Building a new siding in Lumberton and equipping it with CTC.

• Beginning the two-year replacement project of the Trinity River bridge in Fort Worth.

• Expanding parking and support tracks at the Alliance intermodal and automotive facilities in Haslet as well as the Amarillo Automotive Facility.

BNSF’s maintenance program in Texas will include 2,043 miles of track surfacing and undercutting work, replacement of 62 miles of rail and close to 245,500 ties, and signal upgrades for PTC.

• Constructing a staging track west of Custer to provide additional train capacity, and a siding between Burlington and Fidalgo.

• Reconfiguring the Bayside and Delta rail yards located in Everett.

• Continuing to work through permitting and right-of-way issues involving the replacement of the Washougal River bridge in Camas. Construction should start this year and continue into 2016.

BNSF’s maintenance program in Washington will include 1,011 miles of track surfacing and undercutting work, replacement of nearly 50 miles of rail and close to 203,000 ties, as well as signal upgrades for PTC.

“This year’s substantial investments in these states are a clear reflection of how important our operations in are to our overall network and our unwavering commitment to always operating safely—for our people and the communities in which we operate,” BNSF said. “We know our customers are competing in a fast-paced, global economy where a smooth, efficient supply chain can be the difference between winning and losing in the marketplace. This year’s planned expansion and maintenance projects will help give BNSF the capacity flexibility it needs to support our customers’ growing demands and connect products to key markets.”

BNSF’s total 2015 capital program of $6 billion includes $2.9 billion to replace and maintain core network and related assets, nearly $1.5 billion on expansion and efficiency projects, $200 million for continued implementation of PTC, and $1.4 billion for locomotives. Details on projects in other states are forthcoming.