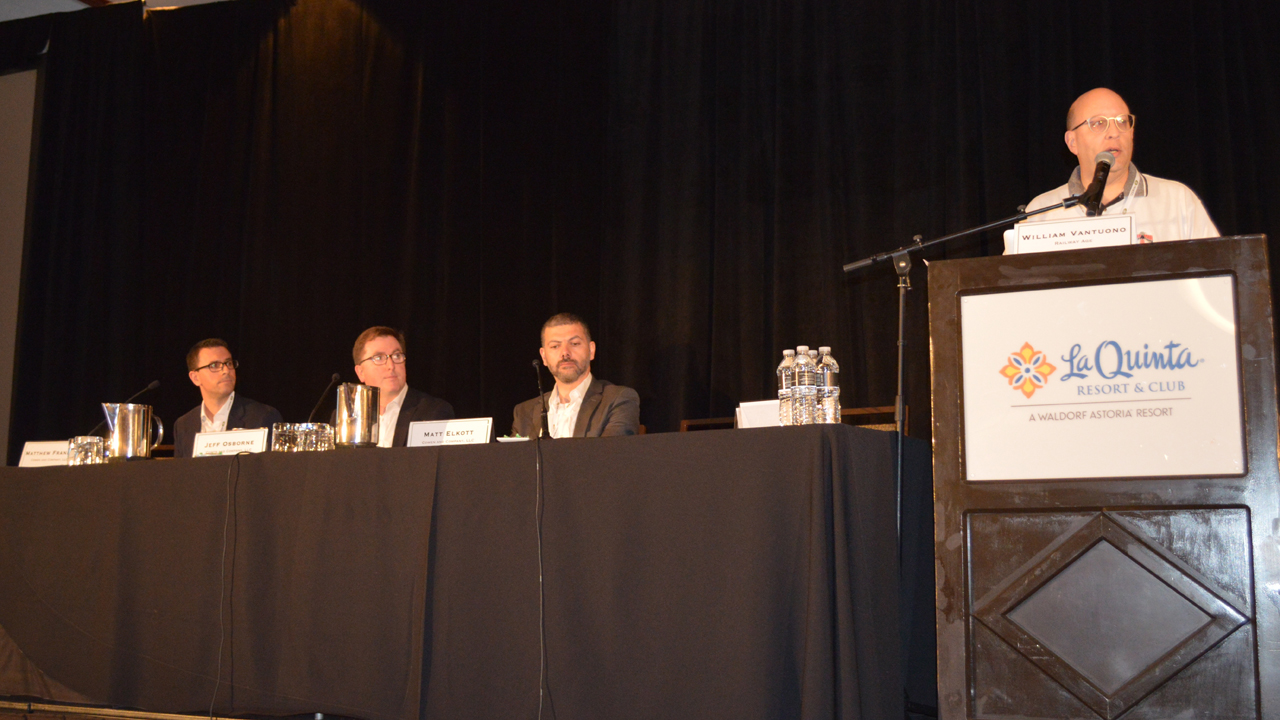 Tesla CEO Elon Musk says his company’s battery-powered, Class 8 big rig will be 20% cheaper to operate than diesel trucks and represents “economic suicide for rail.” He has stated that the cost of running three or more “platooned” electric semis would “approach the cost of shipping by rail.”

“Without knowing the cost of Musk’s electric trucks, and the cost of building the infrastructure nationwide and internationally to support such trucks as well as other costs, I wouldn’t want to speculate as to how accurate or how far off the mark such a statement is,” said Osborne. “Most of what Musk says is exaggerated, especially around timing. But, from a competitive standpoint, railroads would do well to assume the worst: that such trucks will be much more competitive than current diesel trucks, especially on short to medium hauls.”

Tesla claims it will be able to sell 100,000 trucks per year by 2021, only two years after their planned introduction in 2019. “Only 192,252 Class 8 trucks were sold in North America in 2017, and about 1.6 million globally,” the Cowen analysts pointed out. “Tesla’s car sales are about two-thirds domestic and one-third international. If the same were true for trucks, Tesla would have about a 35% domestic share of Class 8 trucks and 6% globally. According to public statements, Tesla has gotten fewer than 500 $20,000 deposits (the minimum required amount) thus far.”

Are Tesla’s deposit holders even interested in testing the vehicle? “While the corporate branding produced by deposit announcements was well worth it, few announcements have been made in recent weeks,” the panel noted.

In terms of operating costs, there are many unknowns. Tesla is assuming battery costs of roughly $100/kWh (kilowatt-hour) in 2020. Cowen estimates the truck’s battery pack is six times the size of the Model S battery, and can help lower costs at its factory in Nevada. “However, the costs of many battery elements are outside of Tesla’s control, including lithium, cobalt, graphite and manganese costs. The assumptions from Tesla assume electricity pricing of $0.07/kWh, which is very aggressive. What about property tax and storage costs for the solar-enhanced charging infrastructure?

“Most distribution centers that would have onsite charging are not designed to handle the electrical load of charging dozens, let alone hundreds, of trucks. Charging time represents a loss of productivity vs. refueling with diesel. What is the impact on truck drivers having to hang out at a remote EV (electric vehicle) charging station vs. the usual stop at a known diesel fueling station? What is the temperature impact on batteries, and the degradation of a full charge over time, in different driving conditions? Most major fleets lease for five years. What are residual values going to be for five-year leases? While maintenance is reduced for electric vehicles, who will be trained to repair them?

“Tesla’s view is that the truck will be 20% cheaper to operate on a per-mile basis. Many details on their assumptions have not been provided.

“We have attempted to build a payback analysis using the $0.07/kWh electricity and $100/kWh battery pack costs. If those assumptions are used, we get to a three-year payback.”

Should the railroads lose sleep over this right now? “No, but they should sleep with one eye half open and watch for oncoming electric truck traffic,” Elkott said. “There is a low risk of significant, technology-driven conversion from rail to truck in the next five years. However, a big step-up in headline risk could occur in two to three years and have real consequences for rail freight and stocks alike, if major players testing technologies come out with high marks and reinforced commitment.”

Tesla isn’t the only manufacturer working on an autonomous, Class 8 semi truck.

Cowen believes that 30% to 60% of rail traffic could be at risk of conversion or increased price competition, should platooned, autonomous electric trucks become ubiquitous. The railroads, though, can take some comfort in the highly fragmented nature of trucking. There are more than 150,000 carriers, and for many, the capital investment requirement in new technology may be prohibitive. However, “will the aging mom and pop operations be discouraged by capital requirements/transformative changes and opt out of the market, thereby reducing trucking industry capacity? Or will they be compelled by the presumably lower conventional equipment and diesel prices to stay or even grow, thereby boosting trucking industry capacity?” the analysts said. “Railroads need to adopt a multi-pronged response to this threat by investing in new technologies such as autonomous and natural gas locomotives; exhausting double-tracking and double-stacking opportunities; focusing on train length and speed; designing and building streamlined, higher-capacity railcars (an intermediate-term positive for builders, a potential risk in the very long term); and exploring additional Class I consolidation.”

Autonomous trucking is on shippers’ radars. In a recent Cowen survey, 86% of rail shippers representing $7.7 billion worth of transportation spending said they would use or consider using autonomous trucks to move their freight.

Autonomous trucks may arrive sooner than you think: Level 3 (driver still required) autonomous trucks could be ubiquitous on U.S. roadways by the mid- to late-2020s. Level 4 (driver required, but less involved) and Level 5 (driverless) could follow in the decade beyond that. Consumer adoption of driverless passenger vehicles is an important precursor.

The railroad cost advantage over trucking could dwindle over time. “We think a Level 3 fleet could see a 4% to 8% earnings improvement,” the analysts said. “We don’t need to have driverless trucks for railroads to lose a substantial portion of their 5% to 15% cost advantage. Platooning is a risk to railroads: A 7% improvement in trucking fuel efficiency leads to a 3% reduction in overall cost per mile alone.”

From a logistics perspective, there are many questions that could be asked more often by the mid-to-late 2020s, according to Frankel:

“A rule of thumb in transportation planning is that one Interstate highway lane can handle about 1,500 automobiles per hour or about 700 80,000-pound trucks per hour, or a combination thereof. A doublestack intermodal train with 100 fully loaded well cars hauls 200 containers, or 400 truckloads. Class I railroads are capable, on some of their main lines (like BNSF’s Transcon), of operating as many as 20-25 doublestack trains per hour. Do the math: Twenty stack trains per hour is the equivalent of 8,000 trucks.

“If, as Musk touts, all that traffic came off our privately owned, tax-paying railroads and was hauled in 80,000-pound trucks, wear and tear on our existing, publicly financed Interstates would skyrocket. Highway maintenance and repair costs would be multiply almost exponentially, and construction of additional lanes would be necessary to accommodate all those trucks. Who’s going to pay for this? The trucking industry? As well, electric trucks will not generate motor-fuels taxes. Will different forms of user charges be adopted? Will legislators see the need for change?

“The trucking industry currently pays, through motor fuels taxes and other user charges, less than 70% of its share of maintaining roads. The public pays the rest. Detailed studies under the auspices of the American Association of State Highway Transportation Officials (AASHTO) in the 1960s clearly demonstrated that truck weight and frequency has a direct impact on highway maintenance costs. This impact would be multiplied by the addition of thousands of autonomous trucks as advocated by Musk and others with similar interests.

“Is this something the public will readily accept?”