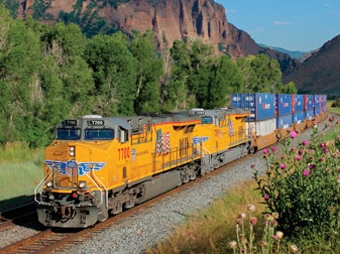 In a pattern uncommon during most of 2014, U.S. freight carload traffic gained ground as 2015 began while U.S. intermodal volume slipped, the Association of American Railroads reported Thursday, Jan. 8, 2015.

U.S. freight carload traffic for the week ending Jan. 3—as measured by AAR, Week 53 of the year 2014—advanced 5.4% measured against the comparable week in 2013. But U.S. intermodal volume suffered a rare (if modest) decline, down 0.7%. Combined U.S. traffic for the week, however, rose 2.8%, continuing a pattern of gains seen through most of 2014.

Seven out of 10 carload commodity groups AAR tracks on a weekly basis posted increases compared with the same week in 2013, including grain, up 23.4%, and metallic ores and metals, up 14.7%. Chemicals led the declining commodity group, down 2.5%; coal was flat in percentage terms, AAR observed.

AAR said 18 of the 20 carload commodity categories tracked annually saw increases on U.S. railroads compared with 2013. Even coal, under duress in recent times, eked out a 1% increase in 2014 over 2013 levels.

“2014 was a challenging year for America’s freight railroads as they responded to traffic surges and shifts in traffic patterns,” said AAR Senior Vice President of Policy and Economics, John T. Gray. “This will be another busy year as the economy continues to grow and the nation’s railroads work to be responsive, flexible and efficient for their customers.”