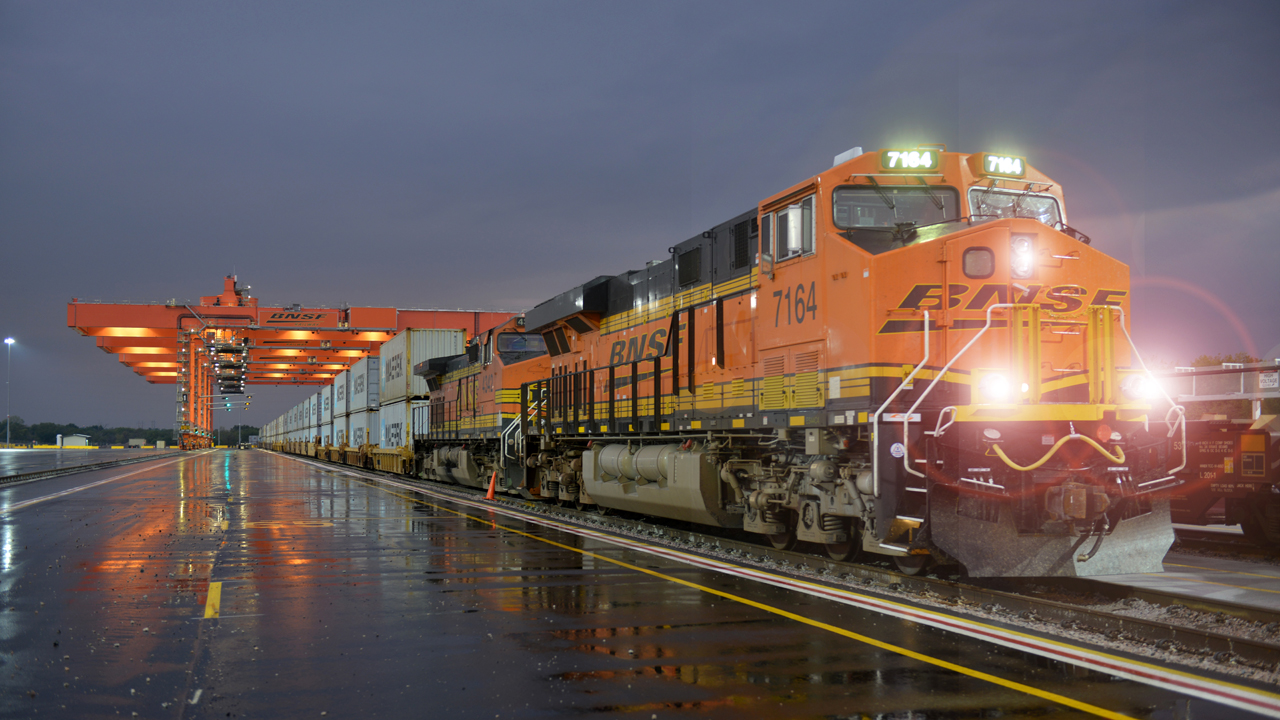 I’ve accepted the challenge offered back in April 2022 by Gil Lamphere regarding the intermodal business options for the North American rail freight sector.

Recall that, over the past several decades, intermodal was where railway freight growth was projected to be. Gil challenges that business hypothesis. Here, I summarize my interpretation of Gil’s observations and then discusses those strategies by focusing upon one of the west’s largest markets, the California Central Valley. How might intermodal work there?

Both Gil and I see the same challenges ahead as to where intermodal rail can and will grow. Whether you are in California or North Carolina, how do you see the critical choices ahead? Care to share your views?

I begin by reviewing the strategic challenges as an entrepreneur like Gil Lamphere sees them. Gil laid out the financial logic behind the investment risks associated with the railroad industry’s business model for the intermodal sector. He reminded us of how challenging it is for rail carriers to make continuous high-margin returns from hauling trailers and containers on railway cars.

Gil spent years trying to answer the simple question of how profitable intermodal rail was or was not. He was looking to define the complex spreadsheet calculation of just the intermodal sector operating income as a percent of costs. The lower the OR (operating ratio) number, the higher the commercial profitability. Put another way, expensing only 55% of a railroad’s operating budget to earn a 45% revenue margin is better than having expenses at about 70% with a revenue margin of just 30%.

Gil’s point is this: Given the private railway investment model, the standalone intermodal financial feasibility must be measured if intermodal is to continue to attract railway investment. Diverting highway market share and obtaining annual high-volume growth rates are insufficient to define intermodal success if you are in that as a trade business.

I concur. It is a challenge.

Class I railroad prefer to have a business with a constant, non-variable flow of goods to make their intermodal operations work profitably. As a business-focused railroader, Gil concluded that strategic planning for the intermodal commerce segment has to focus mostly upon the prices and expenses of the enterprise’s income statement. Those changes plus the return on the invested balance sheet assets are the most critical measurements, at least to those requiring private investment to drive the business expansion. Focusing upon increasing tons or ton-miles of work performed is less important.

Gil’s message is important for all parties including states and shippers to comprehend if you are expecting to collaborate with rail companies on joint-venture intermodal projects.

Here are Gil’s five possible paths going forward to test the intermodal market, as I define them. Each option has different associated inputs and risks.

Strategy No. 1: Build It Out, wherein the railroads add new track and terminals, taking on the market risk by building around specific customer contract terms, operating perhaps as many as eight up-to-200-car long daily trains. This strategy uses the shipper-contract promised revenues to leverage a separately financed intermodal subsidiary, and price to recover a ROE (return on equity) of ~13% to maybe 20%, with a 65% OR.

Strategy No. 2: Selected Hub and Short Shuttle, what I rename as a Fixed-Schedule Shuttle “horizontal elevator” type service. Each intermodal train departs and arrives at a precise time throughout the day. It is a railroad carrier hook-and-haul/drop-and-pickup return service—something we at Zeta Tech Associates proposed for others like the The Port of New York and New Jersey and an Israeli Railroad-served inland port operation. The logical distance move might be about 350 to 500 miles, but the real market opportunity is in 150 to maybe 250 miles.

Strategy No. 3: Restructured for a Low-Cost Center, a “selected short line lanes” service, as in Georgia, or the mixed CSX train connecting Wilmington to Charlotte, N.C. Sort of a niche market.

Strategy No. 4: Mixed Intermodal/ Merchandise/Transloading. This is built around intermodal and blended transload carload freight commodities that share a common O/D lane with mixed cargo types at the same key ports. This leverages higher profit returns for coastal and inland port market pairs that have blends of container and either general cargo freight or selected premium bulk agricultural exports.

Strategy No. 5: All-in P&G-Like Model. This approach might work if railroad management has the investor backing to risk a presumed “Proctor & Gamble” optimistic marketing strategy. That classic entrepreneurial thinking assumes that as volume grows, and more and more trucks are shifted to rail, the result has got to be an improving profit margin. It might work, but it’s a bit risky, not fully proven.

Wait: There is a sixth choice: Do Nothing Strategy. Many economists define this as the classic “milk-it” strategy. Invest very little added capital, be satisfied with a probable 10% to 12% rate of return, and a PSR-like free cash flow profit at an OR between 55 and 65, characterized by the absence of any significant market share gains. This model has a high probability of becoming an eventual exit strategy.

Failures Among Some Successes

Yes, there clearly are challenges. But let’s acknowledge that when using confidential railway costing models, some of us have identified clear high volume density corridors where intermodal trains do already operate profitably, and where additional margin might be achieved by modifying the business model used. Those opportunities have to be balanced against certain risks.

For a balanced scorecard, let’s acknowledge that not every intermodal project tested has succeeded. There are failures. Several Class I’s have exited markets toward which they used to be opportunistic. For example, Norfolk Southern and others tried a West Virginia intermodal project, and it never caught on with customers. The reasons are not fully understood, but possibly it was due to an overestimation of the regional market demand. The terminal was sold off last year in an auction.

My takeaway message: Anyone planning a new intermodal terminal or route service should assume that private ventures come with an unspoken but possible failure rate. The lesson learned is that each new project must have its own due diligence review. How much risk is hard to exactly predict, but case history reviews suggest that about one-third may not achieve their strategic business targets.

Still, failure is part of the natural cleansing when you employ private initiatives. Closing some down and selling the parts off is a natural part of testing new markets.

About a decade ago, a large all-new hub-and-spoke CSX terminal built at New Baltimore, Ohio (south of Toledo) didn’t pan out as expected. But that business outcome had an unexpected upside. What might be characterized as a CSX intermodal stumble became perhaps a BNSF win. BNSF negotiated a deal whereby today, this CSX Ohio location looks like a forward BNSF Logistics Park far to the east of BNSF’s normal Chicago operating territory. Under a freely negotiated arrangement, CSX earns revenue by hauling BNSF intermodal trains between the Chicago terminal and northwestern Ohio under a special haulage agreement. So in October 2018, BNSF extended its direct West Coast intermodal service east as far as western Ohio. It’s five days a week., two trains per day in each direction. CSX also earns a rental use income from the “sunk cost” intermodal yard it built. Who saw that outcome back around 2012?

I’m not sure that this business outcome fits neatly into the five strategies outlined by Gil. Let’s call it a hybrid operation. Very few of us old hands projected this positive outcome:

This boils down to opportunities for one company to have an operation of its private train over another carrier’s tracks with both parties earning commercial compensation. This type of business model might be used going forward on other routes.

Independent railway economist and Railway Age Contributing Editor Jim Blaze has been in the railroad industry for close to 50 years. Trained in logistics, he served seven years with the Illinois DOT as a Chicago long-range freight planner and almost two years with the USRA technical staff in Washington, D.C. Jim then spent 21 years with Conrail in cross-functional strategic roles from branch line economics to mergers, IT, logistics, and corporate change. He followed this with 20 years of international consulting at rail engineering firm Zeta-Tech Associated. Jim is a Magna Cum Laude Graduate of St Anselm’s College with a master’s degree from the University of Chicago. Married with six children, he lives outside of Philadelphia. “This column reflects my continued passion for the future of railroading as a competitive industry,” says Jim. “Only by occasionally challenging our institutions can we probe for better quality and performance. My opinions are my own, independent of Railway Age. As always, contrary business opinions are welcome.”