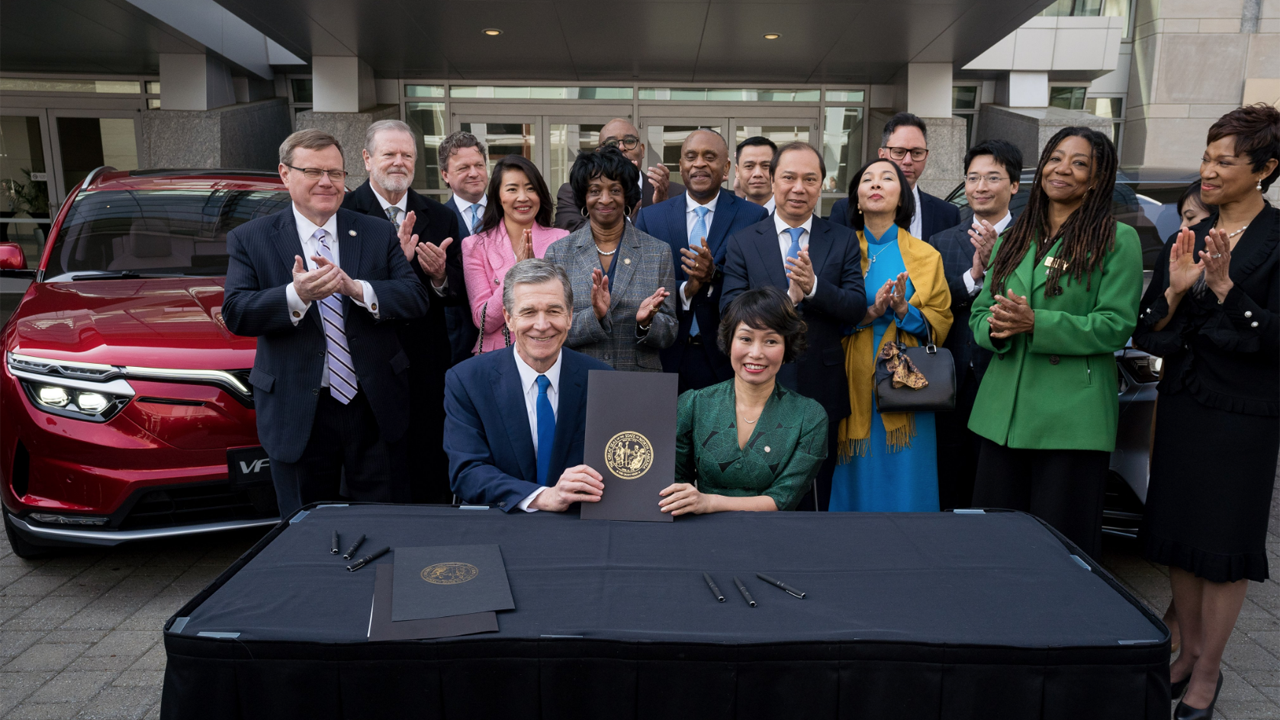 “We are excited to announce that the new home of our first electric vehicle and battery manufacturing site in North America will be in Chatham County, North Carolina! The project is expected to bring thousands of jobs and eventually produce more than 250,000 vehicles per year,” VinFast reported via Twitter on March 29.

NCRR said that its investment—through the economic development initiative NCRR Invests—will boost “freight rail activity in the state by at least 5,000 additional railcars each year.”

Construction is slated to start this year on VinFast’s $2 billion phase 1 project, which will deliver a plant with the capacity to produce 150,000 vehicles per year; they will include the VF 9, a seven-passenger all-electric Sport Utility Vehicle (SUV), and the VF 8, a five-passenger, all-electric mid-size SUV, according to the Office of North Carolina Gov. Roy Cooper. The plant will be located on a 1,977-acre plot at the Triangle Innovations Point Megasite, and is expected to create 7,500 jobs, the office said.

VinFast was established in 2017 as a wholly owned subsidiary of the Vietnamese conglomerate Vingroup. Headquartered in Hanoi, Vietnam, it has a vehicle production facility in Hai Phong, which will have the capacity to produce 950,000 vehicles per year by 2026. Its U.S. headquarters are in the Playa Vista area of Los Angeles, Calif.

VinFast is the second EV manufacturer to construct a campus in North Carolina in partnership with state and local leaders, according to NCRR. With collaborators at the Greensboro-Randolph Megasite, NCRR said it helped to attract the state’s first automotive battery plant, Toyota Battery Manufacturing, in December 2021.

“NCRR is thrilled to share in this opportunity to contribute to an effort including Chatham County, the city of Sanford, the North Carolina Department of Commerce, the Economic Development Partnership of North Carolina, and many others who made this investment in North Carolina a reality,” NCRR President and CEO Carl Warren said. “We are pleased to play a small part in anchoring additional players in the EV manufacturing space in our state.”

In related developments, NCRR is investing $300,000 to help build rail infrastructure for Service Offsite Solutions’ new $11.8 million manufacturing facility in Sanford, N.C.; the company will be served by Atlantic and Western Railway. Also, NCRR will spend $300,000 to assist with the construction of a new rail spur and storage tracks for NS to serve Sherwin-Williams Company’s expanding facility in Statesville, N.C.

Lastly, CSX in December reported that Rivian selected the East Atlanta Megasite to develop a $5 billion manufacturing complex. Located adjacent to the CSX Georgia Road main line between Atlanta and Augusta, Ga., the site will be home to Rivian’s second major assembly plant. CSX said it worked with state and local officials to market the site “as a prime location for a major automotive assembly facility,” and is working with Rivian on rail infrastructure design. Rivian currently manufactures its R1T battery electric pickup truck at a plant in Normal, Ill.