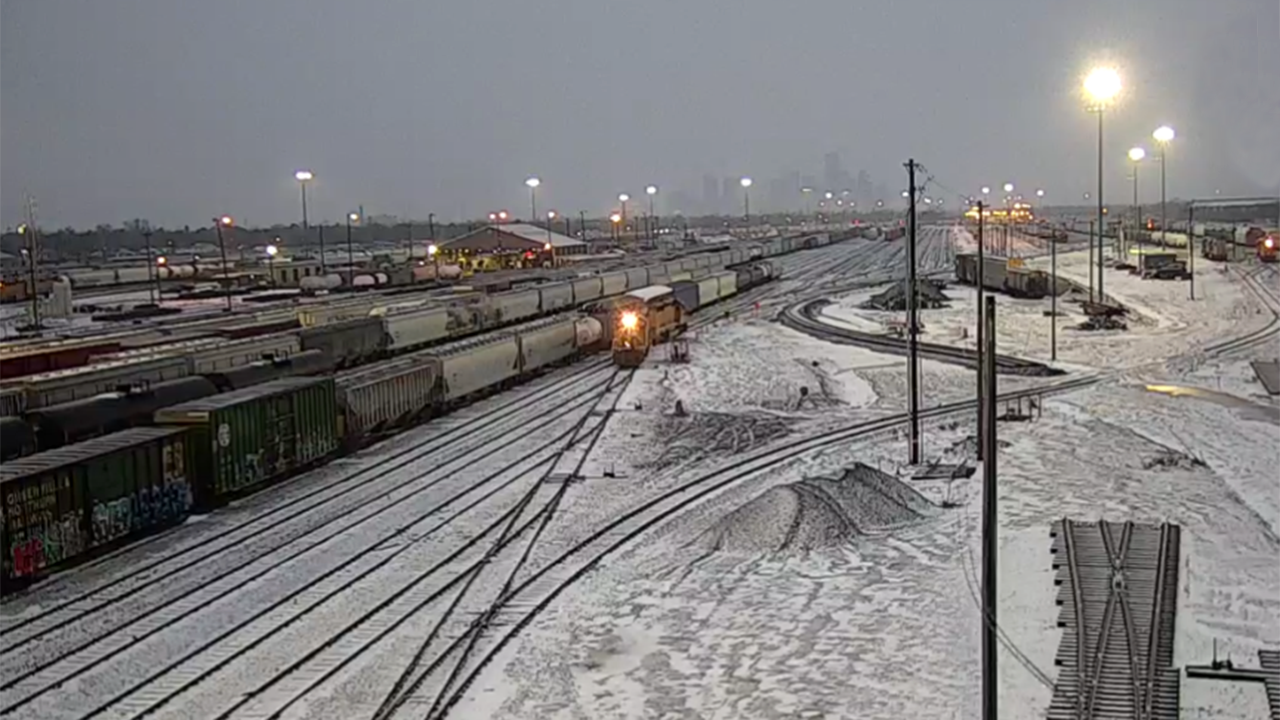 Union Pacific's Englewood Yard in Houston was severely impacted by snow and ice. UP photo

Editor’s Note: As a polar vortex gripped much of the U.S. in February, railroad field employees braved harsh conditions to keep trains running and workers safe. Here are a few examples from Union Pacific, originally posted on the Safety section of the Class I’s website.

As a polar vortex struck the country in late February, Union Pacific employees braved the elements to do what they always do: Keep America moving.

Chicago-area operations focused on significant snow removal, and additional heavy snowfall in the Little Rock and Pine Bluff, Ark., areas, as well as icing in eastern Texas and northern Louisiana, further impacted operations. At one point, more than 400 locations across the UP network were without power, and more than 20% of active trains were holding for at least four hours.

Daryl Cauffman, Manager-Mechanical Maintenance, Transportation, spent a few days with Car Inspectors Mischel Schrader and Sean Hines in Grand Island, Neb., as they dealt with trains’ air issues, traction motors and setouts on the main line to help conductors. They do it all—they wear a lot of hats for the railroad and they’re a very integral part of who we are,” Cauffman said.

For Cauffman, it was a reminder of just how much Schrader, Hines and all employees are doing to keep trains going day in and day out. “They’re like the firefighters of the main line,” he said. “These guys are on call 24 hours a day, and they do what it takes to get things moving. They’re the fix-alls; without them, and those in their role, our system would not be nearly as fluid as it is—especially during these conditions.”

Through this work, safety is the No. 1 priority. Kevin Andersen, Senior Director-Safety, saw this firsthand in Council Bluffs, Iowa, while observing Yardmaster Nick Zeimet and his interactions with his crews. Zeimet kept camaraderie and safety at the forefront amid the wind chills of –30 degrees F.

“It really was his leadership that I believe was the reason they all stayed safe, efficient and had no incidents at all,” Andersen said. Zeimet made it a priority to keep his employees hydrated, rested and in good spirits by giving everyone much needed breaks.

While Andersen said it was valuable to see the yardmaster take initiative in his leadership, it was even more important to see the response from his crew who faced every challenge with a positive outlook. “He remained positive and took care of his guys, and you could see that his crew was in good spirits and they were all going above and beyond for him,” he said. “When they were faced with challenges, their mentality was to work together. They all came together and really worked as one unit under his leadership.”

From salting sidewalks to distributing hot cocoa, to fixing broken pipes to providing hats and gloves, field employees did their part to show they cared—especially in the Southern Region where these conditions are rare.

Locomotive Engineer Michael Byars, a 26-year UP veteran out of San Antonio, Tex., saw countless acts of caring from individuals he knows will stick with these employees. Crews faced the challenges at work and at home as many families also experienced no electricity or water. Byars said that’s what makes it more essential to put in the extra effort. “It’s important they’re being shown they’re cared for and cared about,” he said. “They have to leave loved ones in extremely difficult conditions—it’s valuable to them to have support at work.”