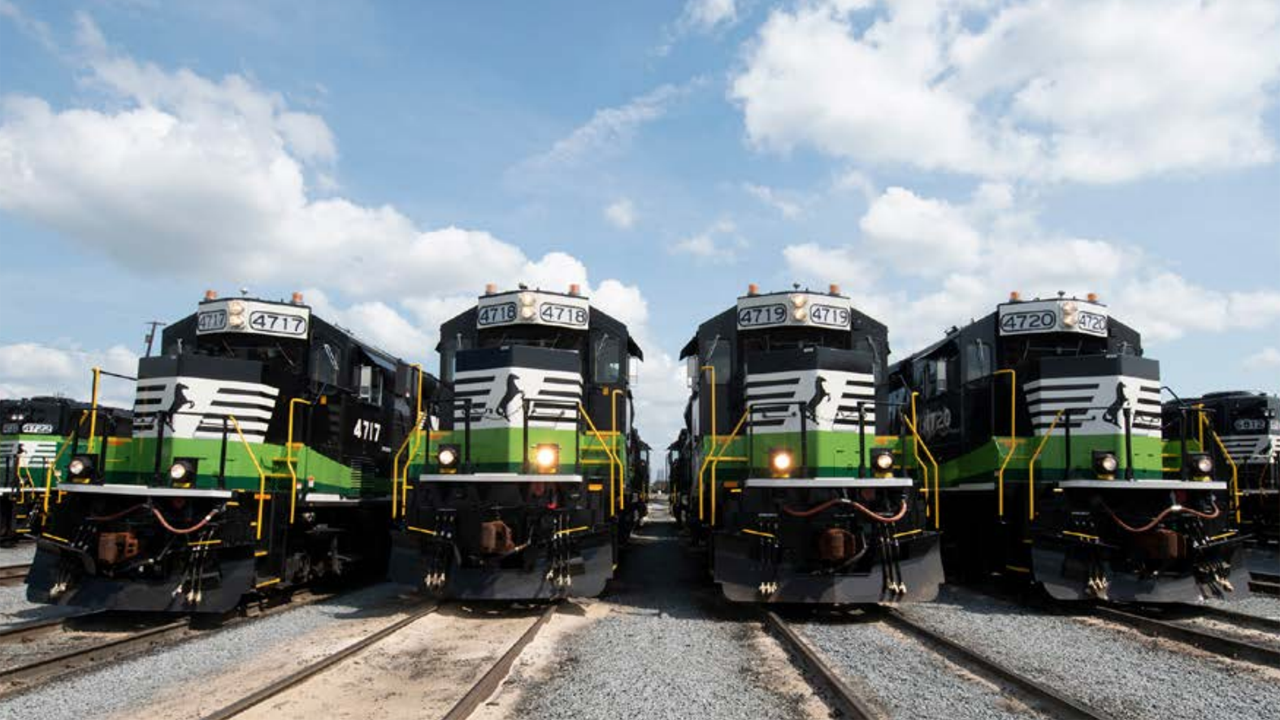 “While rail has long been one of the most environmentally responsible ways to move freight, the industry will never stop striving to increase efficiency and reduce potential impacts,” AAR President and CEO Ian Jefferies said during the virtual award presentation on Oct. 26. “Behind that mission to create a cleaner, more sustainable tomorrow are tireless, thoughtful railroaders. …”

Jefferies pointed out that Raglin, Hornick and Fronczak have collectively “built a legacy of excellence and helped embed stewardship across both the industry and their individual organizations that will continue to grow long into the future.”

• Josh Raglin, Chief Sustainability Officer, NS, who has “built a remarkable career of leadership and service,” over 25 years at the Class I railroad, according to AAR. Raglin has “taken innovative approaches to inject sustainability across his railroad’s operations and business practices, including the issuance earlier this year of $500 million in green bonds to fund railroad investments that benefit the environment, a first for rail in North America. As NS sets its sight on long-term emissions reductions, Raglin was instrumental in establishing science-based targets—reducing the railroad’s scope 1 and 2 greenhouse gas emissions intensity 42% per million gross ton-miles by 2034 from a 2019 base year. Raglin’s impact stretches beyond just NS operations, thanks to his work with its marketing team to design tailored solutions that help customers reduce their own emissions by choosing rail. Since beginning his career managing the Brosnan Forest 14,405-acre woodlands preserve in Dorchester, S.C., where he helped restore longleaf pine habitat and red-cockaded woodpeckers, Raglin has been a driving force to advance conservation programs, including the Trees to Trains Initiative, the world’s largest reforestation project.”

• Christi Hornick, General Manager–Environmental Management, UP, who has been “UP’s most trusted voice and resource on environmental and conservation efforts” since joining the Class I railroad in 1991, according to AAR. She has “spearheaded significant efforts to enhance air quality and mitigate operational impacts near rail yards with a specific focus on the North Platte Rail Yard—the world’s largest classification yard. At North Platte, the railroad was able to meet and exceed Clean Air Act obligations thanks to Hornick’s work. She also orchestrated the railroad’s first voluntary agreement in California with the South Coast Air Quality Management District (SCAQMD), which led to vital inspections and locomotive maintenance to eliminate excessive visible emissions. As a key architect of UP’s environmental management and reporting systems, Hornick has translated big picture regulatory obligations into day-to-day actions that foster a sense of responsibility and accountability spanning from management to locomotive and car shops.”

• Robert “Bob” Fronczak, Assistant Vice President–Environment & Hazmat, AAR, who is known as “one of the most trusted, thoughtful leaders on railroad hazardous materials, environmental affairs and regulatory issues,” according to AAR. Prior to joining AAR in 1994, “Fronczak began his career in 1979 at the Milwaukee Road where he helped build the ground floor of rail environmental awareness and compliance. Beyond ensuring regulatory compliance at Milwaukee, Fronczak even served as an active responder to derailments when hazardous materials were spilled. After supporting railroads in various outside roles, Fronczak returned to the industry to support its work to protect the environment and prevent potential impacts by improving the safe, reliable shipment of hazardous materials. Through his leadership with the Tank Car Committee, railroads fought for and secured tougher tank car standards, which have helped lower hazmat release rates by 64% since 2000. Fronczak was also instrumental in the development of the AskRail app, which puts timely, accurate information on safely managing a rail incident at first responders’ fingertips. He has also helped railroads protect both the planet and their business through his work on issues such as stormwater permitting and diverting crossties from landfills through cogeneration.”

Robert Scoble has worked for NS for seven years, where he has “enhanced the environmental performance of the company in multiple areas,” according to AAR. Scoble, the Engineer Environmental Operations–Safety & Environmental, has a territory comprising all facilities in Ohio, Indiana and Michigan. He “serves as the ‘boots on the ground’ force who is responsible for surveying and inspecting his assigned territory; ensuring local supervision understands and complies with the environmental laws, regulations, permits, plans and best management practices that apply to their facilities; and correcting deficient areas.”

AAR provided this example: “Scoble successfully resolved habitual pH stormwater discharge violations occurring at the Moorman Yard in Ohio. The Moorman Yard has had multiple, ongoing pH exceedances at the facility’s permitted discharge, due to algae blooms developing within the facility’s large stormwater ponds. Scoble conducted multiple investigations and determined the algal blooms formed due to excess nutrients discharged from runoff from the classification yard, local wastewater treatment plants and farmlands that also drain into the yard’s ponds. Scoble set up a new innovative sonification treatment system that kills the algae with sound waves, to disrupt the growth of most of the algal species present within the stormwater ponds, and by doing so, it controlled the pH levels at the yard stormwater outfall. The system installed at Moorman Yard was a first for a NS facility and achieved dramatic positive results. The system—combined with algae eating fish—reduced the need for full application of algicides at the facility and the associated costs by more than two-thirds. As a result, the facility went without an annual pH exceedance for the first time in 10 years. During a recent facility inspection, the local regulator commented that they were interested in this strategy and will be recommending it to other facilities in the area with similar pH/algae issues.”