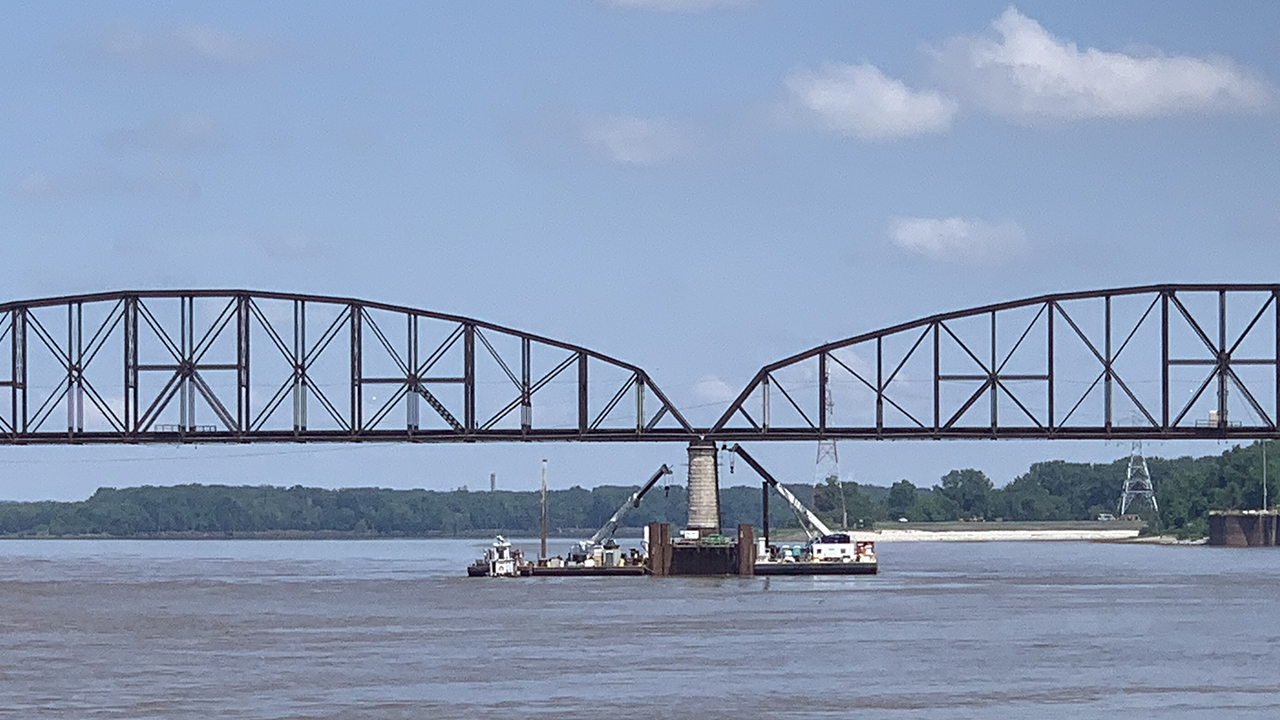 Work in progress on the Merchants Memorial Mississippi Rail Bridge.

The St. Louis Regional Freightway’s 2022 Priority Projects List features 21 projects worth $2.75 billion that “represent key infrastructure needs of the manufacturing and logistics industries in the Eastern Missouri and Southwestern Illinois area.” Many are rail-specific or rail-related. The most important is a major project to replace the Merchants Memorial Mississippi Rail Bridge, constructed in 1889.

More than $1.1 billion of the projects on the list are already funded and under construction, expected to start in 2021/2022, or scheduled to begin within the next few years. “The 2022 list indicates tremendous progress is being made on nearly two-dozen projects that will strengthen critical roads, bridges, rail infrastructure and port and airport facilities across the bi-state St. Louis region, supporting multimodal connectivity and providing global access to shippers and carriers throughout the world,” said Ron Tindall, President of Terminal Railroad Association of St. Louis (TRRA, Railway Age’s 2020 Short Line of the Year) and Chairman of the Freightway’s Freight Development Committee. “The St. Louis Regional Freightway’s approach to creating a Priority Projects List that identifies key infrastructure projects and advocates for funding for them continues to gain national recognition, most recently being recognized in a joint report by the U.S. Department of Agriculture and the U.S. Department of Transportation as a model of partnership and productive collaboration between the public and private sector across the eight county area the St. Louis Regional Freightway serves. It continues to drive the success in regional project prioritization.”

Slated for completion in late 2023 is the region’s “highest priority,” the $222 million project to replace the Merchants Memorial Mississippi Rail Bridge linking Missouri and Illinois in Downtown St. Louis. Owned and operated by TRRA since it was constructed in 1889, “this vital rail artery across the Mississippi River is one of the nation’s primary east-west rail corridors serving the nation’s third-largest rail hub,” the agency said.

Among other projects under way, the $42 million Interstate 255/Davis Street Ferry Road Interchange in St. Clair County in Illinois is scheduled for construction in 2022, and upon completion, “has the potential to play a key role in facilitating growth at the Union Pacific intermodal yard in Dupo, Ill., by reducing travel times and lowering transportation costs for those utilizing one of the region’s largest intermodal assets.”

Among the high-priority projects partially scheduled for construction, $100 million has been allocated for improvement projects on Interstate 70 in Missouri from Wentzville to the Stan Musial Veteran’s Memorial Bridge.Improvements on I-70 from Route 141 to I-170 near the St. Louis Lambert International Airport have been identified as a new high priority project and represent an addition to the 2022 list as part of the overall I-70 project. “The importance of the I-70 investments for the agriculture industry alone is underscored by the same USDA/USDOT report that showcased the Freightway’s approach to project prioritization.,” the agency noted. “The report revealed that agricultural freight is expected to increase 23% during the next 20 years, with the majority moving on just 17% of highway mileage, including one corridor that includes I-70 spanning the entire State of Missouri and serving the St. Louis region, which is home to the third-largest rail hub in the U.S., the third-largest inland port as well as the Ag Coast of America.”

The Priority Projects List is compiled annually by the St. Louis Regional Freightway’s Freight Development Committee. Business and industry leaders work directly with local and state officials and the Illinois DOT and the Missouri DOT to set infrastructure priorities “by helping them to understand how infrastructure and efficiency impact on-time delivery and costs. The ongoing regional effort to compile and build consensus for this list remains a key accomplishment of the organization and plays a vital role in helping to ensure various parties are familiar with the priorities before they see them on a grant application.”

The 2022 Priority Projects List will be submitted to the East-West Gateway Council of Governments for approval later this year. Comments regarding the 2022 list are welcome through August 15 by email at [email protected]. A full list of 2022 Priority Projects can be found at https://www.thefreightway.com/why-stl-region/priority-infrastructure-projects/.

The St. Louis Regional Freightway is a Bi-State Development enterprise formed to create a regional freight district and comprehensive authority for freight operations and opportunities within eight counties in Illinois and Missouri that comprise the St. Louis metropolitan area. Public sector and private industry businesses are partnering with the St. Louis Regional Freightway to establish the bi-state region “as one of the premier multimodal freight hubs and distribution centers in the United States through marketing, public advocacy, and freight and infrastructure development.”

Related story: How St. Louis Relies on a Port of Virginia Rail Connection