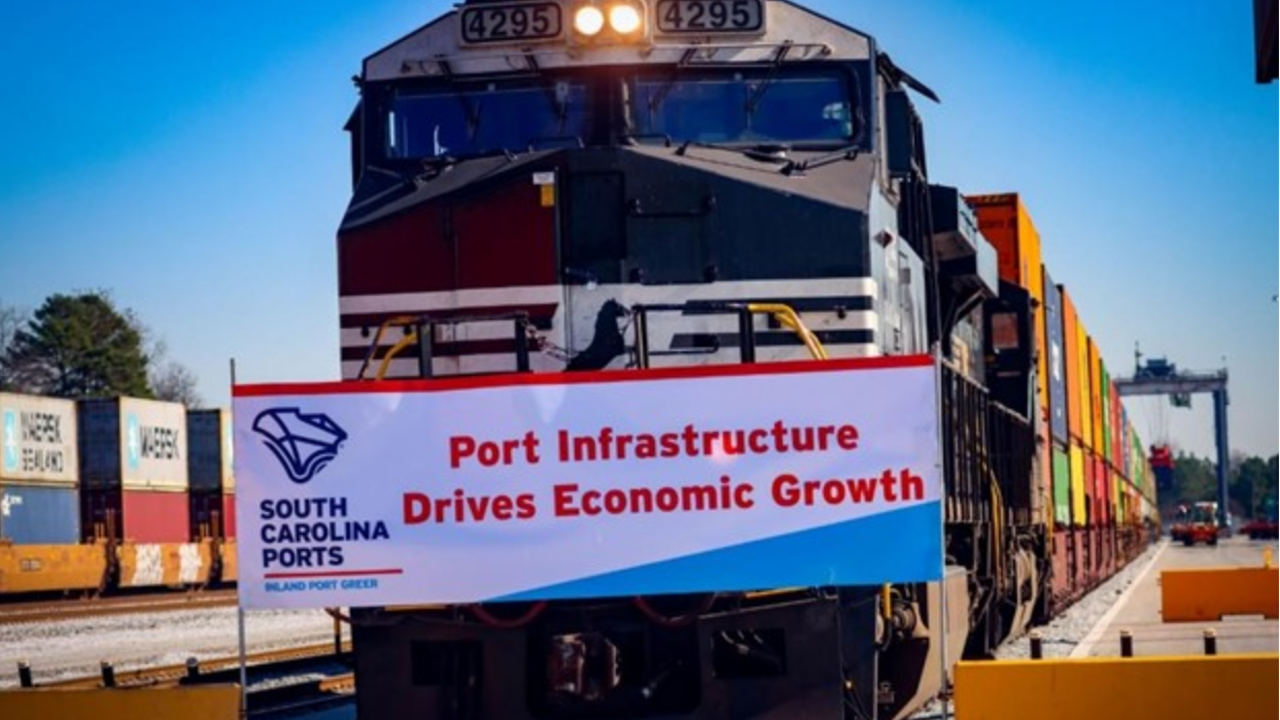 Phase I of the capacity expansion project at Inland Port Greer is now complete. The full project in Upstate South Carolina is expected to wrap up in winter 2024. (Photo/SCPA/English Purcell)

Spurred by port customer growth and supply chain challenges that reinforced the need for more capacity, SC Ports said it has built another rail processing track and two rail-storage tracks within the Greer, S.C. terminal, which it owns and operates. The addition of 8,000 feet of new rail is slated to meet cargo demands through 2040, it reported.

The next phase of the project involves expanding the container yard by 15 acres to the east and the west to handle 50% more cargo.

The expansion also includes doubling the size of the existing chassis yard capacity and building new facilities for heavy lift maintenance and terminal operations, according to SC Ports. The full project is expected to wrap up in winter 2024. It will help to remove more 150,000 trucks from the interstate annually and to eliminate the use of 5 million diesel gallons and 50 thousand metric tons of emissions, according to NS.

Both SC Ports’ revenues and a portion of a $25 million U.S. Department of Transportation BUILD (Better Utilizing Investments to Leverage Development) grant are funding the more than $30 million expansion, according to SC Ports. The grant was awarded in 2018 to the South Carolina Department of Transportation for its Upstate Express Corridor Program.

“The expansion of Inland Port Greer adds more space for containers and trains to meet the capacity needs of our customers,” SC Ports General Manager of Projects and Design Ed Stehmeyer said. “The goal of the terminal expansion is to bolster the Upstate [South Carolina] intermodal infrastructure supply chain and further develop the inland terminal to handle more cargo for our customers.”

“Nine years into operations, we are thrilled to be expanding the cargo capacity and rail capabilities at Inland Port Greer to better serve our customers’ supply chains,” SC Ports President and CEO Barbara Melvin said. “We are proud to play a role in supporting Upstate companies’ success.”

“SC Ports continues to deliver for BMW,” said Robert Engelhorn President and CEO of BMW Manufacturing, which was the inland port’s first customer. “Inland Port Greer has proved incredibly beneficial to our supply chain by efficiently moving parts that are critical to vehicle production. BMW also exports 60% of our South Carolina-made vehicles through the Port of Charleston to 120 countries around the world.”

“Norfolk Southern is continuing to invest in South Carolina’s rail infrastructure to help achieve our own growth goals and create even more certainty for our customers,” NS Group Vice President International Marketing and Sales Alexander Luc said. “Expanding the rail capacity at Inland Port Greer will help us serve the Navy Base Intermodal Facility and enhance fluidity throughout the Southeast.”

SC Ports on Oct. 17 hosted a groundbreaking in North Charleston for the Navy Base Intermodal Facility, which will provide near-dock rail and inner-harbor barge operation to the Port of Charleston. The facility will be served by NS, CSX and Palmetto Railways when it opens in July 2025.