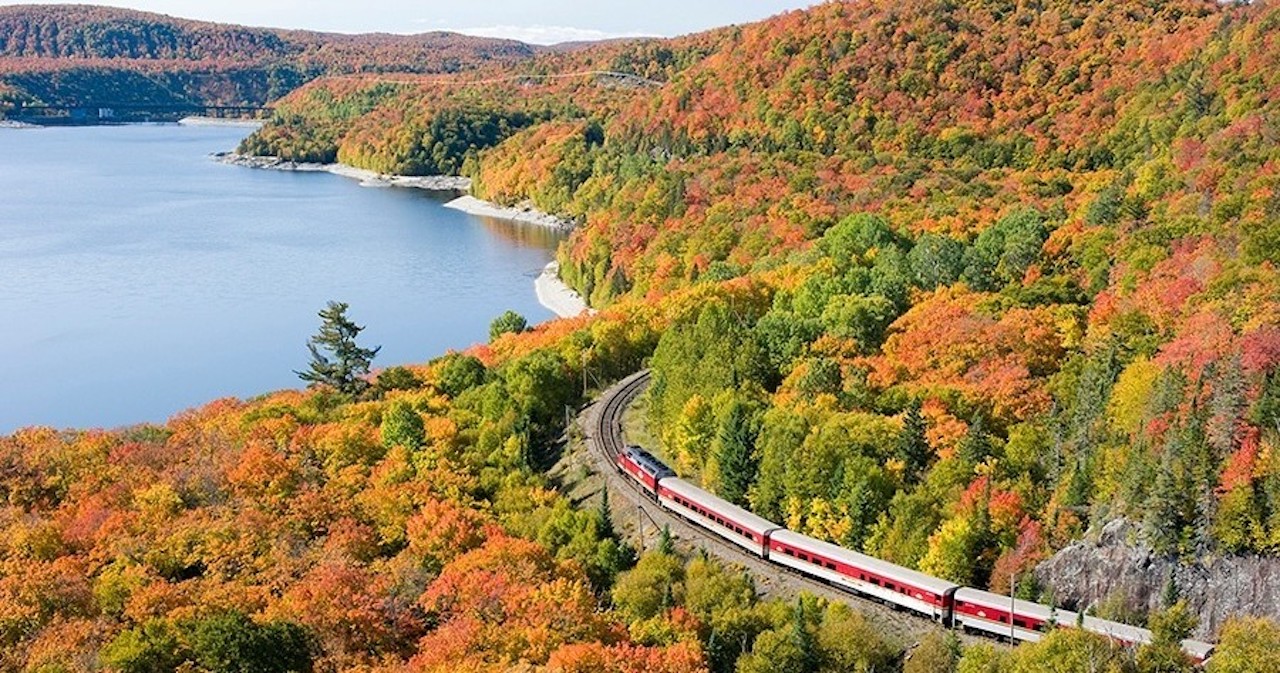 The 113-mile route travels past dozens of crystal-clear lakes, over roaring rivers, and snakes around more than 800 curves as passengers are treated to 10 hours of scenic views of untouched Canadian wilderness, Watco says. “It’s the beauty of nature merged with the nostalgic splendor of passenger train travel.”

“I am so proud of the team we pulled together in the Soo,” said ACR General Manager Wes Logan. “Our team members here, collectively, have decades of experience in running this tourist operation. They are professionals with great enthusiasm for the job at hand: giving our customers a safe, world class tour train experience up to the Agawa Canyon Park and back.”

After arriving at the park, passengers have 90 minutes to climb the 300 steps to Lookout Point. Less strenuous trails offer views of Black Beaver Falls and Bridal Veil Falls, featuring a 225-foot drop. The Agawa River’s banks provide opportunities for a leisurely stroll and picnic tables for lunch set opposite the granite bluffs that inspired Canada’s famed Group of Seven artists.

This experience, Watco says, draws not only locals, but people from across Canada, and the rest of the world. One young woman from Toronto said she recently left her job due to stress and was looking for a way to relax. A friend told her about the train excursion and said it would be a nice escape from the city. She booked a ticket online and took the 10-hour bus ride to Sault Ste. Marie for the train’s first trip.

“This is so pretty and relaxing. It’s exactly what I needed,” she said while viewing the canyon below from Lookout Point as the morning’s rain rose from the trees as wispy fog.

A mother of three from Chicago said she planned their family vacation around the Agawa’s first tour.

“We take the train in Chicago every day, but this is different. I wanted to show my kids a more scenic train experience,” she said. “We’d planned to come up here earlier in the summer, but when I saw the train was starting up now, we changed all our plans. It’s been amazing. We did the waterfall trails at the park, and they were beautiful.”

Another passenger came to Canada from Trinidad & Tobago. This 72-year-old woman recently worked for the United Nations as a refugee advocate in Jordan. In 2018, she left her post and invited a Syrian family to return with her to Canada. The family–a mother, father, two sons, and a daughter–fled the violence of the civil war in Raqqa.

She took them into her home and after four years, the family finally received clearance to travel throughout the country. Upon receiving that clearance, the host immediately bought tickets for the train.

“I first came here 40 years ago. I came back again 20 years ago. Both times, I came with my family. Now, again, 20 years later at 72, I’ve brought my new family,” she said while leaning on the railing at Lookout Point. “This family has been through so much. Now that they can travel through the country, I wanted to bring them to a place that meant a lot to me and show them that there’s much more to this country than the city where we live.”

The Agawa Canyon tour train, Watco says, offers something for most people. “It’s a brief respite from busy city life. It’s a place to see wild lands unlike anywhere else. It’s one of the most multicultural experiences in the area. And it’s an old-fashioned train ride, run by expert railroaders and staff, that’s educational and scenic,” the company added.

“Locally, we are aware of how important this tour train is to the community and across various stakeholders, such as the local First Nations, the municipality, hotels and restaurants. We were welcomed with open arms and found a great deal of support as we approached tour train startup. Our hope is to foster these relationships to advance the passenger experience in years to come,” Logan said.