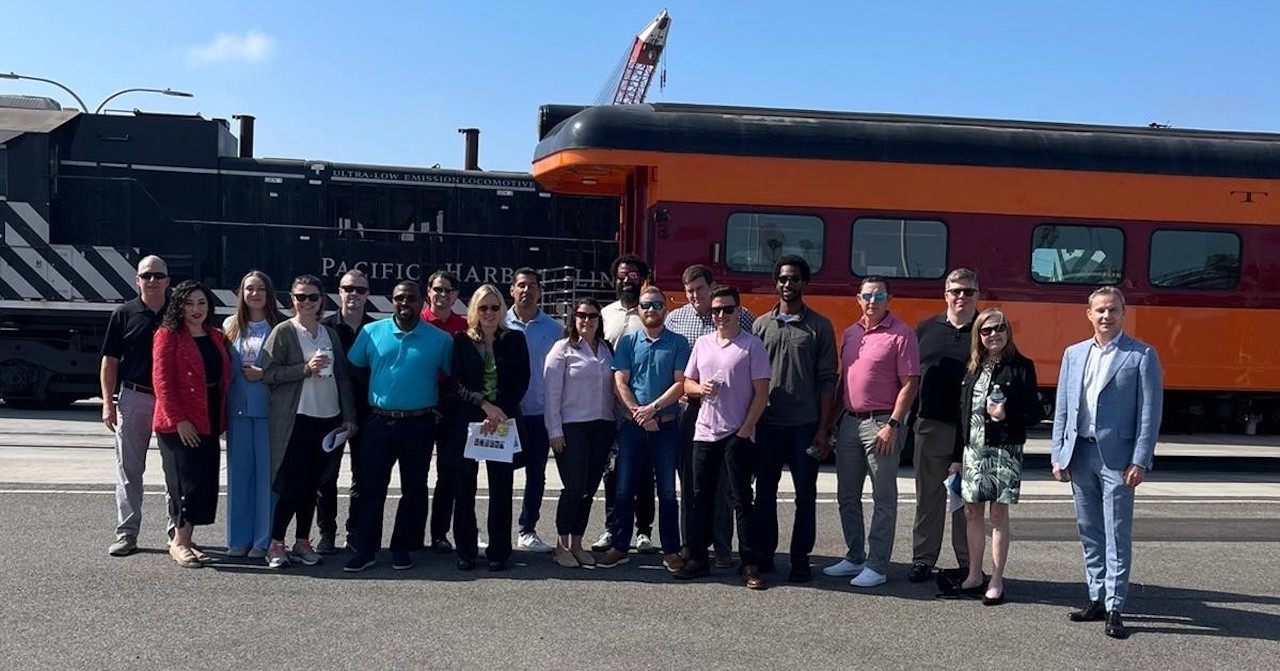 Students from the Transportation and Supply Chain Institute at the University of Denver took a tour this past July of Pacific Harbor Line and its related port facilities.

Master’s Degree students in the University of Denver’s (DU) Transportation and Supply Chain Institute toured short line railroad Pacific Harbor Line (PHL) for an entire week in July to “experience the transportation industry at one of its critical nerve centers.”

PHL, which is owned by Chicago-based Anacostia Rail Holdings (ARH) and is “responsible for maintaining fluidity inside America’s busiest intermodal gateway,” along with the Port of Long Beach, welcomed 15 DU students to the tour, led by Institute Executive Director David Fisher. The students, who are part of a six-quarter Master of Science Degree program at the Institute, toured various infrastructure facilities associated with the Port of Long Beach and other program partners, such as UPS, Matson and PHL. Each quarter of the master’s program includes a residency week, such as the visit to Long Beach.

According to ARH, PHL provides rail transportation and dispatching for the Ports of Long Beach and Los Angeles, which, together, form America’s largest container port. In addition to annually switching approximately 40,000 freight cars annually, PHL switches nine on-dock intermodal terminals and dispatches more than 30 stack trains on a 24/7 basis to its Class I partners BNSF Railway and Union Pacific (UP).

“These field trips help coalesce and solidify the theory and logic that we are delivering in the classroom,” said Fisher. “For our executive students, it is a terrific way to observe the complications between different logistics operations.”

Among the high points of the visit, ARH says, was the passenger train tour of the short line’s manifest and intermodal operations, the Alameda Corridor—the key rail artery linking the ports with the U.S. railway system—as well as the Badger Bridge to the Terminal Island complex. Separately, the students also received a waterborne tour of the Port of Long Beach, which collectively provided a full scope of how traffic moves through the system.

The DU students, ARH says, “couldn’t find a better example of a railroad operating in the heart of today’s complex transportation network.” Although technically a short line, ARH says PHL “has all the attributes of its Class I partners,” including a double-track main line, centralized traffic control, and a full slate of approximately 30 daily crews serving the port’s marine terminals, plus as many as 10 daily switch jobs serving PHL’s carload customers.

In PHL, Fisher says he “sees a highly complex and proficient railroad that ties in directly with the goals of the program.”

“Seeing the primary rail connector of the largest port pair in the U.S. is a quite powerful experience for professional logisticians,” Fisher explained. “Learning the details of the PHL operation demonstrates solution management of composite activities. We were thrilled to get such a comprehensive tour and will no doubt be back with a future cohort of our program.”

This year’s DU visitors included ARH Senior Director of Business Development—and a student at the Institute—Kimia Khatam, who says the Institute has “attracted transportation and supply-chain professionals from across a wide array of sectors due to its combined academic and hands-on approach to teaching.”

“This residency week in Southern California was truly a highlight of the program,” said Khatami. “The advantage of being in a cohort of students, who are already successful professionals in diverse roles within their companies, is that we learn as much from each other as we do our professors and faculty. The recruiting process has been refined over the many years that this program has been founded and it targets those who are strong contributors to the field with bright futures ahead.”

Khatami, ARH says, views the DU partnership as a “natural fit” for the company, adding that it “fosters collaboration between companies represented by either their students or board members, and allows for an abundant exchange of ideas and business opportunities, while building long-lasting industry relationships.”