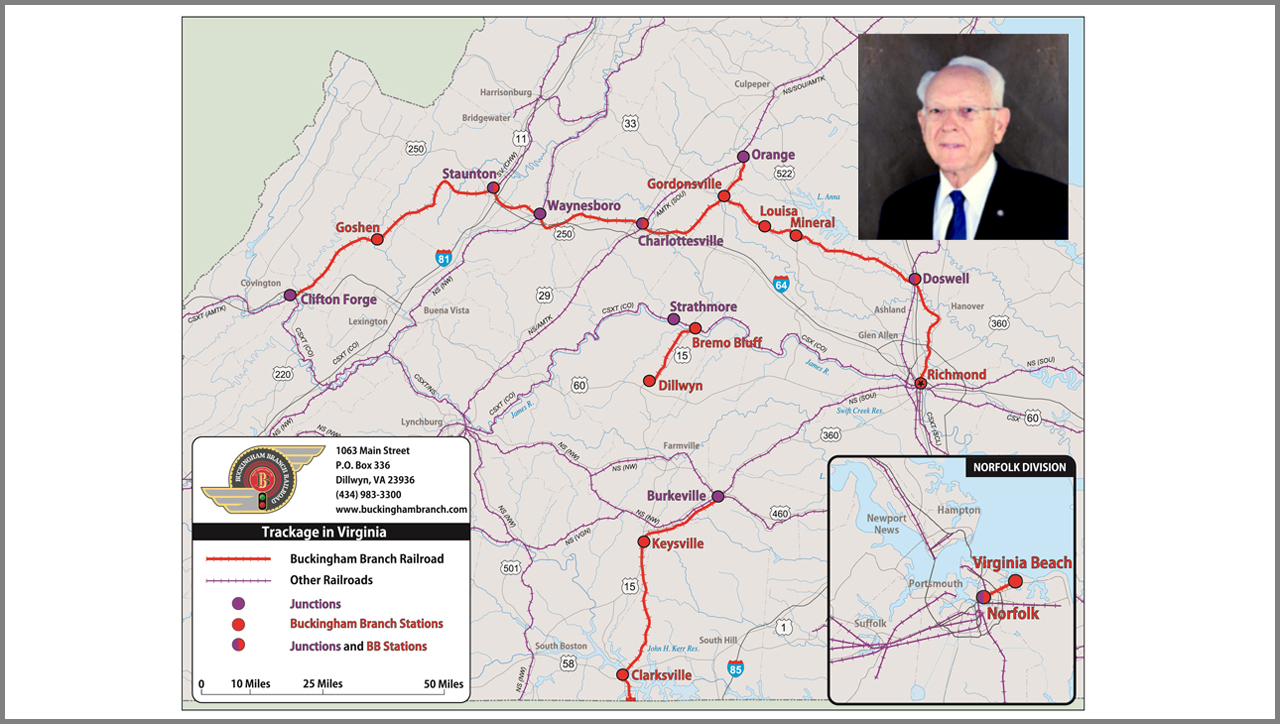 “Bob leaves behind an incredible team and family that has learned so much from him, and a company that will continue to thrive for generations to come,” ASLRRA President Chuck Baker said in a statement about the passing of Robert (“Bob”) Earl Bryant (pictured), who founded the Dillwyn, Va.-based Buckingham Branch.

Robert (“Bob”) Earl Bryant, Founder and Board Chair of the Dillwyn, Va.-based Buckingham Branch, died May 8. He was 87.

Bryant started his railroad career in 1953 as a messenger for the C&O Railway in Richmond, Va. He rose through the ranks at C&O and its successors, retiring in 1987 as Market Manager, Planning and Analysis for CSX in Baltimore, Md. “In 1988, together with his wife Annie [Jones Bryant], he founded the Buckingham Branch and was instrumental in establishing the BB’s customer and commodity base and in bringing the right people into the organization to ensure its success,” according to the short line’s website. The Buckingham Branch has since grown from 17.3 miles to 280 miles of track in four divisions (Buckingham, Richmond & Alleghany, Virginia Southern, and Norfolk)—the largest short line in Virginia.

Bryant had remained active in the management of the company and continued to “provide the vision and the principles that guide the Buckingham Branch,” and enjoyed work on his farm, according to the short line’s website. Bryant was also a founding member and longtime President of the Virginia Railroad Association, a Fellow in the Virginia Rail Policy Institute, and a member of both the Old Dominion Chapter of the National Railway Historical Society and the C&O Historical Society.

“The Buckingham Branch, built by Bob and continued by his son Mark Bryant (CEO) and Steve Powell (President), is a remarkable success story, and its employees are outstanding representatives of what the short line railroad industry is all about,” American Short Line and Regional Railroad Association (ASLRRA) President Chuck Baker said in a May 11 statement. “Bob leaves behind an incredible team and family that has learned so much from him, and a company that will continue to thrive for generations to come. The Buckingham Branch Railroad and its leadership has been a significant contributor to ASLRRA, always ready to answer the call for a request to participate in initiatives that will move the industry forward. Bob will be missed most certainly, and equally as certainly never forgotten.”