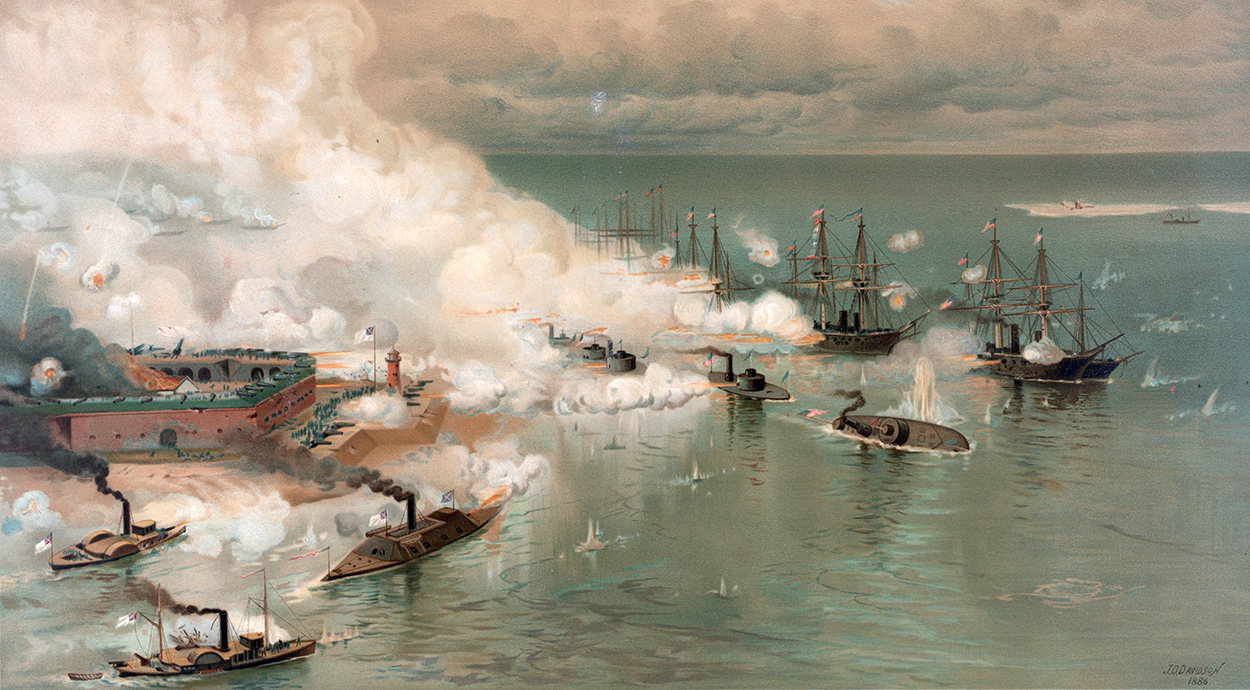 Today (Feb. 15) marks the first of two days of a Surface Transportation Board hearing on what Railway Age Contributing Editor and practicing intellectual property attorney David Peter Alan calls “The Second Battle of Mobile Bay” (the famous Civil War skirmish widely believed to have turned the tide of battle in favor of the Union Army*). This is the battle between Amtrak and CSX, with Norfolk Southern engaged in a smaller but nonetheless important way, over Gulf Coast service, a new intercity passenger rail service linking New Orleans with Mobile, Ala.

This editorial is the 12th in a series of news reports and opinion pieces we’ve published since March 2017, when then-Amtrak CEO Wick Moorman reiterated his railroad’s commitment to seeing service restored along the Gulf Coast. We resumed coverage of what has become a legal soap opera (some say political theater) four years later, in March 2021. Rest assured, No. 12 won’t be the last story, mostly because what happens during the next few months may very well determine when, where and under what conditions—financial, regulatory, legal, political or otherwise—Amtrak will be able to establish new intercity service, or expand existing service, on a host freight railroad.

Considering the message that Railway Age has been for years repeating—this is one industry (dammit!)—this particular Amtrak/host railroad skirmish has the appearance of a civil war, albeit with many rather uncivil comments that continue to be lobbed publicly. Is this saber-rattling keeping legions of legal eagles busy really necessary? Is Gulf Coast service indeed a “poster child” for Amtrak strategy going forward, as CSX implied in a letter to its shippers?

“… STB’s decision will have broad implications impacting service to freight rail customers across the U.S. … If this is allowed to happen on the Gulf Coast, Amtrak could deploy this strategy wherever you ship your goods.”

There’s been some confusion surrounding the dollar figures for right-of-way improvements, I and several Railway Age colleagues being among those suffering from “he-said/she-said” information overload. Thanks to a better-informed observer, numbers finally came to my attention that may make things a bit less confusing. So, here’s a rundown of how matters have unfolded in this ongoing saga, much of it from the public record.

First, let’s look at prior studies that took place from 2016 to 2017, the Gulf Coast Working Group’s (GCWG) 2017 Report to Congress, which is on the Federal Railroad Administration’s website (download below), with appendices (a whopping 767 pages, too big to attach here; you’ll need to download it yourself). The Report and Appendix K explain where the hugely disparate $100 million and $2.3 billion right-of-way improvement numbers come from, and what proposed passenger service they were associated with. An excerpt:

“To identify the infrastructure improvements to support the restoration of passenger service over the 724 miles of CSX-hosted track [between New Orleans and Orlando, Fla.], CSX, at FRA’s direction and with support from the GCWG, engaged HDR Inc. to perform rail service modeling. The outcome of this initial effort identified more than $2.3 billion in infrastructure improvements to support the passenger service, including lengthening existing passing sidings throughout the route, installing new tracks and yard improvements, and other projects.

In the current litigation before the STB, CSX and Norfolk Southern submitted an RTC study showing “significant degradation to freight rail service if passenger service was permitted on the line without any additional infrastructure.” The RTC report submitted on Nov. 3, 2021 as part of CSX and Norfolk Southern’s opening evidence (download below) identified 14 proposed infrastructure projects, 13 on CSX, 1 on NS:

“The RTC study analyzed Amtrak’s proposed passenger service of two trains in each direction (four total) per day between New Orleans and Mobile … Appendix D outlines in detail the 14 proposed infrastructure improvements … CSX and Norfolk Southern submitted an engineering cost assessment report performed by V3 Companies that estimates the cost of each of the 14 proposed projects. The total estimated cost for these 14 projects is between $405 million and $440 million” (emphasis mine).

On Dec. 3, 2021 Amtrak filed extremely long-winded reply evidence  (459 pages, download below) that “made a few assertions,” according to my source:

It seems to me that the actual cost of right-of-way improvements needed for CSX (and to a far lesser extent NS) to accommodate 28 weekly trains between New Orleans and Mobile is somewhere between $100 million and $418 million, in round numbers. What’s an accurate number? In my humble opinion, it can’t be $0. That makes zero sense. And it’s probably not $418 million, a number that looks to me to be a starting point for reaching a reasonable number upon which both parties can agree. It’s called “negotiation,” duh! Have we forgotten how to do that?

The people involved in these proceedings on both sides need to take heed of Dr. Chester L. Karrass: “In business as in life, you don’t get what you deserve. You get what you negotiate.” I don’t really know what the actual dollar figure might be, but $260 million pops into my pointy little head. However, that’s not my point.

Why can’t this matter be negotiated between business interests, railroaders, the people who are actually responsible for running a railroad? Or building and maintaining it? Do we really need this political circus and finger pointing? Hell no! So please, let’s cut the crap, park your egos at the door and get down to business. It’s like this: I (Amtrak) want to run trains on your (CSX) railroad. What’s it gonna cost me? How can I sweeten the deal for you? How can you give me what I want without screwing yourself? Simple, eh?

It has been done before: California’s Capitol Corridor (Capitol Corridor Joint Powers Authority and Union Pacific). CSX is doing it now with the Commonwealth of Virginia.

For more than 20 years, Railway Age held annual Passenger Trains on Freight Railroads conferences in Washington, D.C. to discuss and examine possible solutions to the same problems that launched the Second Battle of Mobile Bay, the same problems now pitting Amtrak against CSX and Norfolk Southern in the STB courtroom. We discontinued those conferences because attendance had dwindled. I thought at the time that those conferences had made a difference. Perhaps they did, for a time. But, sadly, I suppose, few people remember what was said. I distinctly remember Norfolk Southern CEO David Goode, our two-time Railroader of the Year, stating in a keynote speech to the passenger and freight stakeholders in the audience, “We can be friends.” And to my knowledge, no Class I railroad has ever said, publicly, “We don’t want passenger trains on our network.”

There’s a simple (and yes, simplistic) way to “fix your little problem and light this candle,” as Alan Shepard said to NASA mission controllers while waiting on the launch pad aboard Mercury-Redstone Freedom 7 in May 1961. It involves the United States government doing whatever it takes—implementing a national transportation policy with modal equity; investing the money; building the right-of-way capacity required to operate passenger trains safely, without freight train interference, on existing private freight railroad right-of-way; funding the services, etc., etc. It’s that simple—but it takes leadership, vision, respect, passion, optimism, a willingness to compromise, etc. This country has the money. We’ve spent trillions of dollars elsewhere, right? As we used to say in my hometown, Newark, N.J., what’s your freakin’ excuse?

If anything is going to get done to improve passenger rail in this country, whether it involves Amtrak, regional/commuter trains, dedicated, true high-speed rail, high-performance rail, rail transit, whatever, we need to quell the extremism that has, like cancer, invaded our society and starting the process of rotting from the inside. Stop the turf wars. Stop the misinformation. Stop the political posturing. Silence for good, or render irrelevant, the troglodytic politicians who beat their anti-passenger-rail clubs on their pavement-covered campaign war chests. If we can do this, every company or organization that turns a steel wheel on a steel rail and gets people or goods from one place to another will be better off, along with our society, and our environment. Can we do this?

Of course! In the 1960s, we progressed from sub-orbital space flight to Apollo 11 in less than a decade. After all, this is the 21st century. Right?

* From Wikipedia: The Battle of Mobile Bay of August 5, 1864, was an engagement of the American Civil War in which a Union fleet commanded by Rear Admiral David G. Farragut, assisted by a contingent of soldiers, attacked a smaller Confederate fleet led by Admiral Franklin Buchanan and three forts that guarded the entrance to Mobile Bay. Farragut’s order of “Damn the torpedoes! Four bells. Captain Drayton, go ahead! Jouett, full speed!” became famous in paraphrase, as “Damn the torpedoes, full speed ahead!” The battle was marked by Farragut’s seemingly rash but successful run through a minefield that had just claimed one of his ironclad monitors, enabling his fleet to get beyond the range of the shore-based guns. This was followed by a reduction of the Confederate fleet to a single vessel, ironclad CSS Tennessee. Tennessee did not then retire, but engaged the entire Northern fleet. Tennessee’s armor enabled her to inflict more injury than she received, but she could not overcome the imbalance in numbers. She was eventually reduced to a motionless hulk and surrendered, ending the battle. With no Navy to support them, the three forts also surrendered within days. Complete control of lower Mobile Bay thus passed to the Union forces.