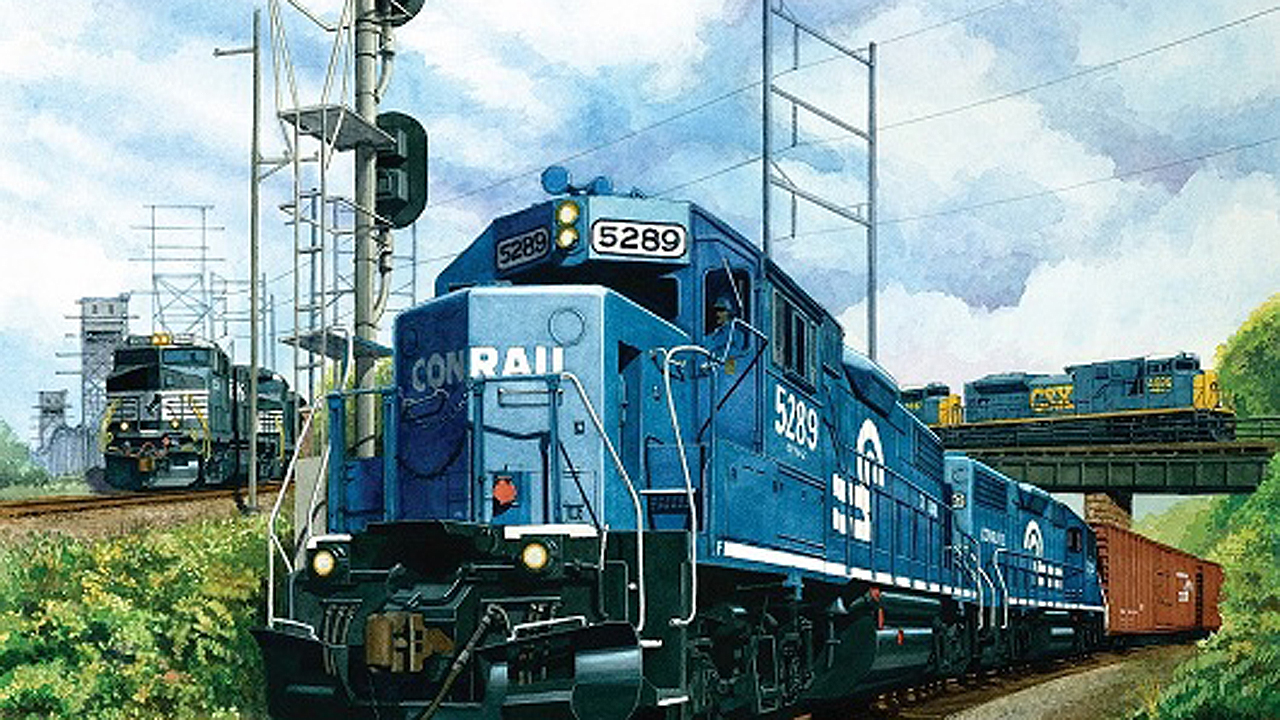 Before CN or CSX rolled out Precision Scheduled Railroading (PSR) under the leadership of the late E. Hunter Harrison, a much smaller terminal railroad company in the eastern U.S. was demonstrating aggressive cost reduction. It was Consolidated Railroad Corporation (Conrail).

Actually, there have been two companies named Conrail. The first was created by the U.S. Congress (the January 1974 3-R Act) as part of the federal effort to restructure the re-organizable assets of bankrupt Northeastern railroads Penn Central, Jersey Central, Erie-Lackawanna, Lehigh Valley, Reading and Lehigh & Hudson River. It was acquired and divided, 58%/42%, by Norfolk Southern and CSX in the late 1990s. The so-called “Conrail Split” generated the second Conrail—Conrail Shared Assets Operations (CSAO), a neutral terminal/switching railroad, owned jointly by NS and CSX, with operations in Northern New Jersey, Southern New Jersey/Philadelphia and Detroit.

The large, network version of Conrail (sometimes called “Big Conrail”) went into operation on April 1, 1976. Among its cost reduction achievements were:

All of this was accomplished as the company resized its asset base to better-serve a market demand that went down from more than 400 million annual tons of freight traffic to less than 200 million tons between about 1976 and 1981.

As part of the last of the mega-sized railroad mergers, key parts of Conrail were absorbed into NS and CSX. What remained of Conrail became CSAO, whose creation of was a condition of the merger approval process before the Surface Transportation Board (STB). That restructuring into a terminal railroad company occurred effectively during the summer of 1999.

CSAO operates as a cost center. It performs car switching and yard classification work for its two owners, NS and CSX. It does not bill shippers or participate in the waybill. Strictly speaking, it serves as the railway local operating agent for its two owners.Train operation primarily covers just under 500 track-miles in the Northern New Jersey region that is part of the New York City urban area, plus another approximately 370 track-miles in the Southern New Jersey/Philadelphia metropolitan region, and 360 track-miles in Detroit.

In the years that followed the breakup of the original Conrail, the new terminal operation worked to increase the level of two-railroad service competition offered to railroad shippers. The original Conrail had served more than 80% of the highly urbanized East Coast market under its original 1974 Congressional charter. Neither CSX nor Norfolk Southern in those years had direct service contact with those shippers. In some ways, this was a form of “open access” local freight service.

The simple translation is that freight customers in these terminal areas have a choice of using either NS or CSX main line routings or prices between the many NS- and CSX-served remote origin or destination markets. Another benefit is that when a single entity like CSAO performs the terminal switching service, the unit costs within a congested geographic area like northern New Jersey or Philadelphia or Detroit are lower than if each Class I railroad company performed its own train movements.

A limited circulation report suggests that by about 2016, the provided service metrics were pretty good. CSAO switching of freight cars at customer locations was in excess of 94% of customer expectation. That’s remarkably high compliance. Train departure service provided by CSAO was typically in the 90% to 92% range according to one report. Freight car yard dwell time across the CSAO network was less than 20 hours. In contrast, yard dwell times at many Class I yards was often in the 24- to more than 30-hour range, according to a survey of STB metrics reports.

The results have been impressive at a practical level. Between the first full base year of 2000 and 2014, CSAO managers have produced the following productivity gains:

Consolidation of complex railway terminal operations under a unified operating command structure clearly works and delivers both cost improvements as well as service and safety benefits. That’s important, since strategically, the next big hurdle in improving overall railway freight efficiency in the PSR era is likely to be within these complex yards and industrial areas. At least two of the Class I railroads have separately admitted that yard operating improvements are the next front for continued productivity gains. Therefore, reorganizing the improvements made under the Conrail terminal changes should provide lessons for rail management and regulators in the next decade.

PSR cost reduction results are not unique to the current business model offered by six of the current seven Class I North American railroads. The only significant difference is that the cash flow savings from a terminal operation flow directly to the owning railroad companies (in this case CSX and NS), rather than to shippers as lower rates or to investors as dividends.