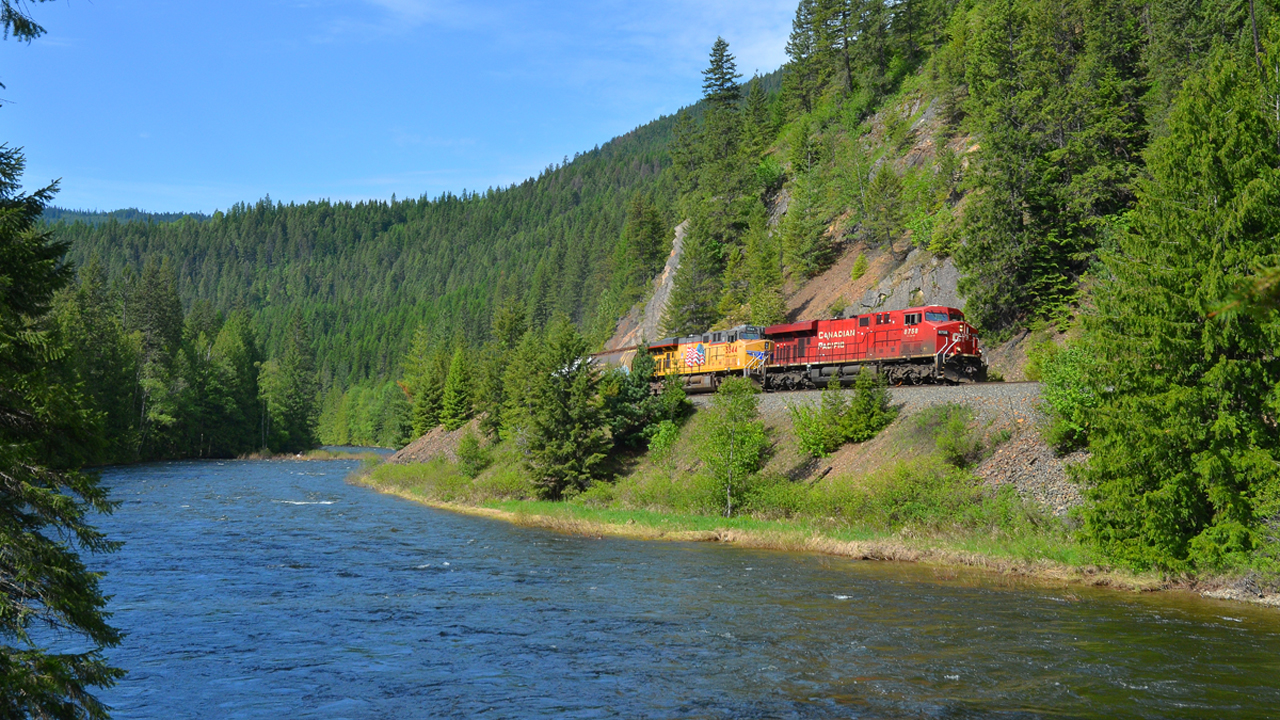 The past two decades have been a time of steady growth for Union Pacific’s only route to the Canadian border, running from Hinkle, Ore., north through Spokane, Wash., to Eastport, Idaho. Capacity improvements performed over the past several years, and more scheduled for 2019, are evidence of UP’s commitment to accommodate new business through this seldom-mentioned international gateway.

UP and Canadian Pacific have referred to it as the Can-Am Corridor, a vital outlet for unit train and carload business that includes Canadian exports into the U.S., Canadian exports overseas via U.S. ports, and U.S. grain from the Midwest that travels across southern Canada before re-entering the U.S. at Eastport. The increase in traffic over the Can-Am has prompted 20-plus years of incremental investment in capacity improvements, on both sides of the border.

Up until the early 1990s, UP’s interchange with CP at Eastport averaged just one manifest train each way per day, plus occasional unit trains of grain or potash moving south. But by the early 2000s, traffic through Eastport had quadrupled. South of Spokane, that traffic is joined by two more manifests, as well as three or four coal trains per week coming off BNSF at Spokane for delivery by UP to a powerplant in northeast Oregon.

The Can-Am’s growth got its start in 1997 when potash transport consortium Canpotex opened its export terminal near Portland, Ore. The following year, one-third of Canada’s potash exports began heading that way. UP responded to the surge in potash and other Can-Am traffic by replacing jointed rail with continuous welded rail between Spokane and Eastport, and by replacing wood ties with concrete ties on some of the steeper and more heavily curved sections of that route.

UP and CP extended the length of some sidings to handle longer trains, while Canpotex ordered a fleet of new high-capacity hoppers from National Steel Car. Precursors to the grain hoppers which CP ordered from NSC in 2018, the cars that Canpotex began using in 1999 allowed potash trains on the Can-Am to grow from 104 cars hauling 12,000 tons to 124 cars hauling 17,000 tons. In 2011, potash trains on the Can-Am began averaging 135 cars, prompting both railroads to lengthen a handful of sidings even more.

In 2014, UP added signals and dispatcher-controlled turnouts to its siding at Trentwood, Wash., northeast of Spokane. This marked the first phase of introducing Centralized Traffic Control (CTC) to its 139-mile Spokane Subdivision (Spokane-to-Eastport), which has otherwise been dark (un-signaled) territory dispatched by Track Warrant Control (TWC). By the end of 2016, some 35 miles of CTC was in operation on the south end of UP’s Spokane Sub, from Control Point Lee Street in Spokane to Garwood, Idaho. A new CTC siding at Garwood was put into service in December 2018.

UP has also invested heavily in track, signal, and dispatching upgrades on its 170-mile Ayer Sub between Fish Lake (just southwest of Spokane) and Hinkle. The majority of that route used to be Automatic Block Signal (ABS) territory dispatched by TWC, with manual turnouts requiring trains to stop and line themselves into sidings to meet opposing traffic. Now, the majority of the Ayer Sub is CTC, with less than 30 miles of ABS/TWC remaining. The Ayer Sub itself has been the scene of regional traffic growth in recent years, from perishables and other commodities in the Wallula/Kennewick area, to possible expansion of grain and other business coming off short lines which connect with UP at Hooper Jct. and Wallula. 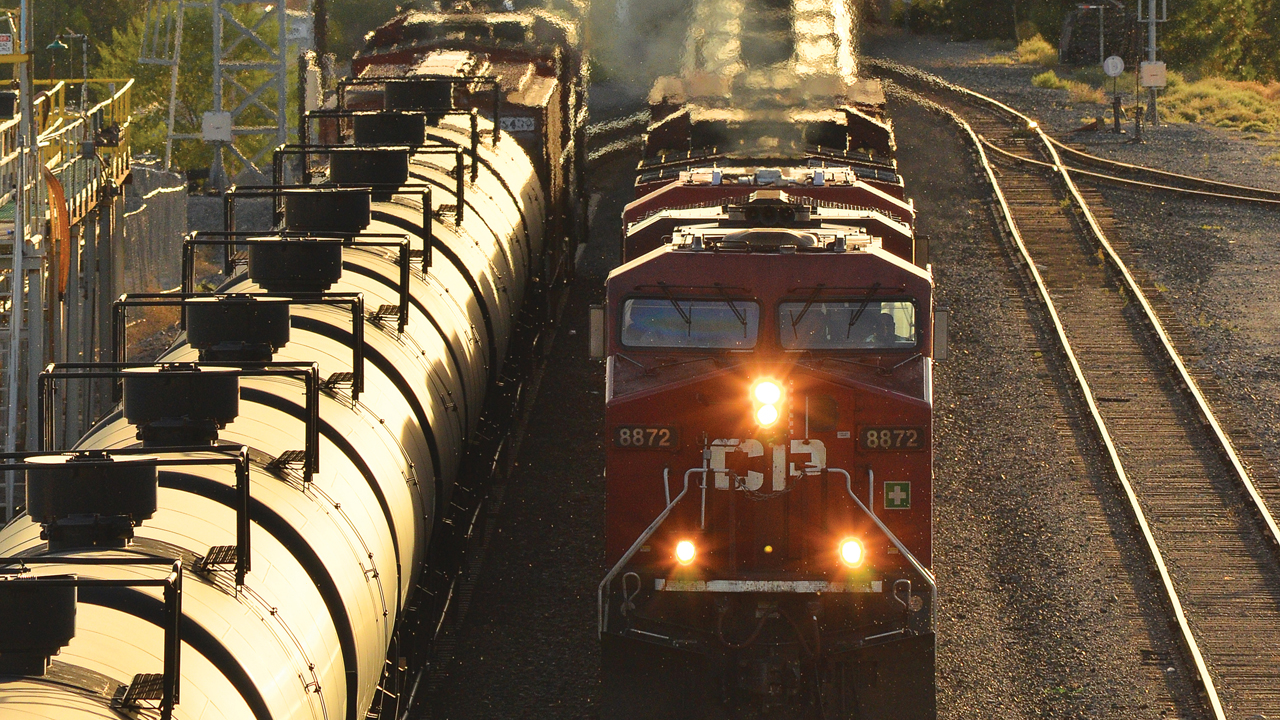 Unit crude from Canada waits in the siding (left) at Trentwood, Wash., while CP power leads an empty oil train northward up the main, headed for the Alberta Oil Sands. The Can-Am Corridor is one of several rail-haul options for delivering Canadian crude to refineries and export terminals in the U.S.

Meanwhile, on the Spokane Sub, one of UP’s next capacity projects will be a new siding near Meadow Creek, Idaho, less than 15 miles below the Canadian border. Kristen South, UP Senior Director-Corporate Communications & Media Relations, tells Railway Age, “UP is currently finalizing the design for the Meadow Creek siding and reviewing project timelines. The siding would give us the flexibility to run longer trains and support increasing traffic to and from the Eastport gateway.”

Border facilities at both Eastport (UP) and Kingsgate (CP) are extremely limited in the number of trains they can hold awaiting customs inspection and outbound crews. Constrained by steep mountain slopes on one side and the Moyie River on the other, both railroads could face expensive hurdles in order to improve throughput at this increasingly busy border crossing. Throughput could also be improved by converting more of the Spokane Sub to CTC from Garwood northward. South says, “Regarding Eastport and extension of CTC from Garwood, these options remain part of our long-term growth strategy; however, we have no immediate plans for either project.”

CP’s portion of the Can-Am Corridor, from Kingsgate, B.C., north through Cranbrook to Fort Steele (where it connects with CP’s southern route over the Canadian Rockies), has experienced changes as well. In 2013, CP reduced personnel at its Cranbrook Yard, and in 2015 a number of yard tracks were removed there, but elsewhere on its portion of the Can-Am Corridor, CP has lengthened a number of sidings and installed new rail and ties at critical curve or grade locations. Other than localized CTC at junction points such as Fort Steele and Sparwood, B.C., CP’s Can-Am trackage is currently dark territory dispatched by Occupancy Control System (OCS), a Canadian version of TWC.

Canpotex is considering expansion of its Portland-area terminal, with a corresponding increase in potash trains moving south through Eastport. Exports of Canadian crude to the U.S., which nearly doubled in 2018 compared to 2017, have been hindered at times by insufficient pipeline and rail-haul capacity. Adding new pipeline between Canada’s Oil Sands region and the central and eastern U.S. has been slowed by eco-political protest. Adding new pipeline to carry Canadian crude to western U.S. refineries or to export docks on either nation’s Pacific Coast faces the added obstacle of mountainous terrain.

In February 2019, Alberta Premier Rachel Notley announced her province had signed contracts with CP and Canadian National for transport of an additional 20,000 barrels per day beginning in July, increasing to nearly 120,000 BPD by mid-2020. Alberta said it will lease 4,400 tank cars (3,400 new DOT-117s, 1,000 retrofitted DOT-117Rs) to deliver Canadian crude to destinations which, as of early March, remain undisclosed.

CP already sends several oil trains each week toward the western U.S. through its connections with BNSF in northwest Washington and north-central Montana, and with UP at Eastport. Oil trains currently traveling the Can-Am Corridor deliver to refineries in western Washington and central California. UP and CP declined to comment on potential increases of crude or other commodities on the Can-Am.

Unlike UP, BNSF, and CN, which all have multiple routes to the Pacific Coast, CP has direct access to just one Pacific port area: Vancouver, B.C. The Can-Am Corridor provides CP and its customers with some degree of interline access to additional seaports in Washington and Oregon, as well as markets up and down the U.S. West Coast. Considering UP’s current efforts to reduce overhead and restructure its operations, the incentive for CP to take charge of UP’s share of the Can-Am and acquire a more direct route to Pacific terminals south of the Canadian border is not outside the realm of possibility.