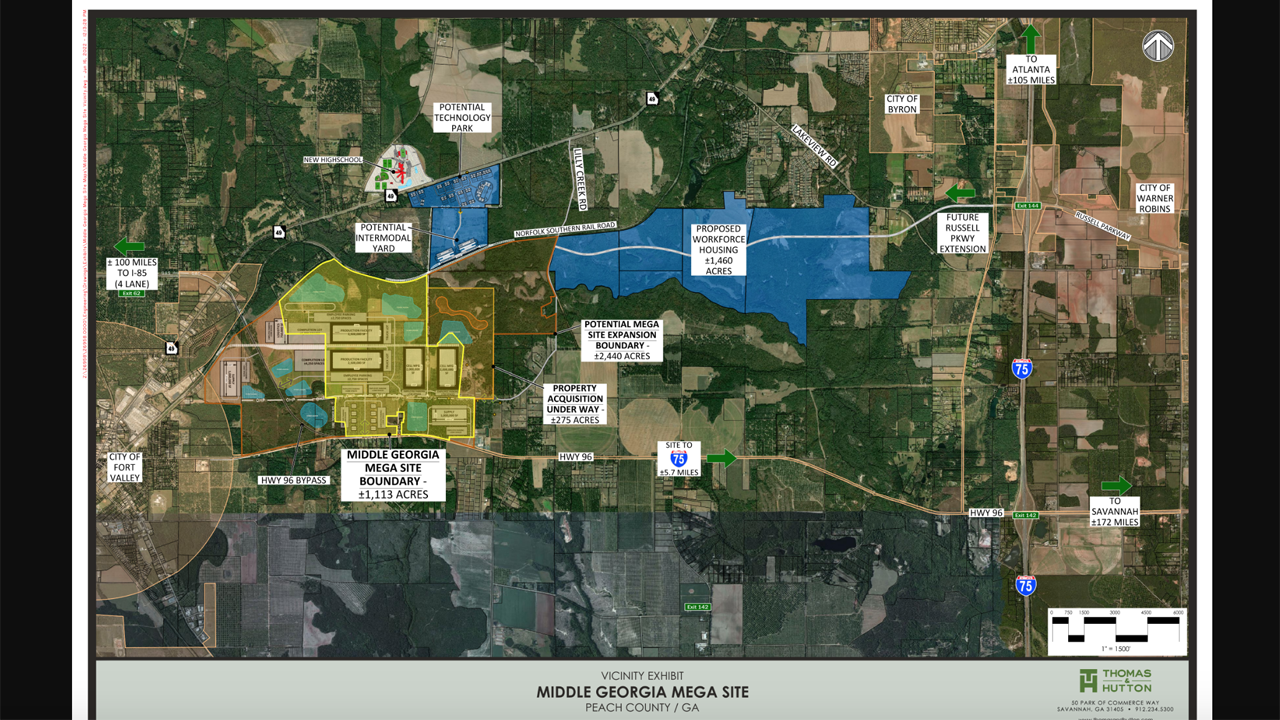 The Middle Georgia Megasite—adjacent to Georgia Highway 96 in Peach County—will be served by Norfolk Southern, which can access the Port of Savannah and Port of Brunswick in less than five hours. (Map Courtesy of Development Authority of Peach County, Ga.)

The state of Georgia and the Development Authority of Peach County purchased a 1,113-acre industrial development site to be served by Norfolk Southern (NS). Also, Bartlett, a Savage Company, kicked off construction of its $375 million, Watco-served soybean crushing plant in southeast Kansas.

The Middle Georgia Megasite is adjacent to Georgia Highway 96 in Peach County, near Fort Valley, and includes four parcels of land. Rail service, to be provided by NS, will allow access in less than five hours to the Port of Savannah and Port of Brunswick, which are 171 and 188 miles to the east, respectively. By truck, the site is 90 minutes from the Hartsfield-Jackson Atlanta International Airport and 25 minutes from the Middle Georgia Regional and Perry-Houston County airports. Cordele Intermodal Services, Inc., is 46 miles south of the site along Interstate 75.

The Middle Georgia Megasite is one of three industrial development sites recently announced in the state. Seoul, South Korea-based Hyundai Motor Group reported last month that it will invest $5.54 billion to open its first dedicated full electric vehicle (EV) and battery manufacturing plant in Bryan County, Ga. It will be served by Genesee & Wyoming’s Georgia Central Railway. Additionally, Rivian in December 2021 selected the East Atlanta Megasite to develop a $5 billion manufacturing complex. Located adjacent to the CSX Georgia Road main line between Atlanta and Augusta, it will be home to Rivian’s second major assembly plant.

“It is very encouraging to see a new, fully prepared megasite that will create more high-quality jobs for hardworking Georgians in rural parts of the state,” Georgia Gov. Brian P. Kemp said during the June 16 announcement. “I am thankful to Peach County for their partnership on this investment.”

Ground preparation work is now under way by Crossland Construction Company for the processing plant, grain elevator and loop track system. Plant operations are slated to begin in early 2024. Some 50 permanent jobs will be created.

“The facility will be an economic driver in Southeast Kansas and expand markets for local soybean producers and agribusinesses,” Bartlett President Bob Knief said. “We appreciate the ongoing support from state, federal and local leaders, and look forward to serving a vital role for the food, animal feed and renewable fuel industries. We’ll support our nation’s transition to renewable fuels by sourcing up to 65 million gallons of feedstock for renewable transportation fuels annually, which will reduce greenhouse gas emissions by over 400,000 tons a year.”