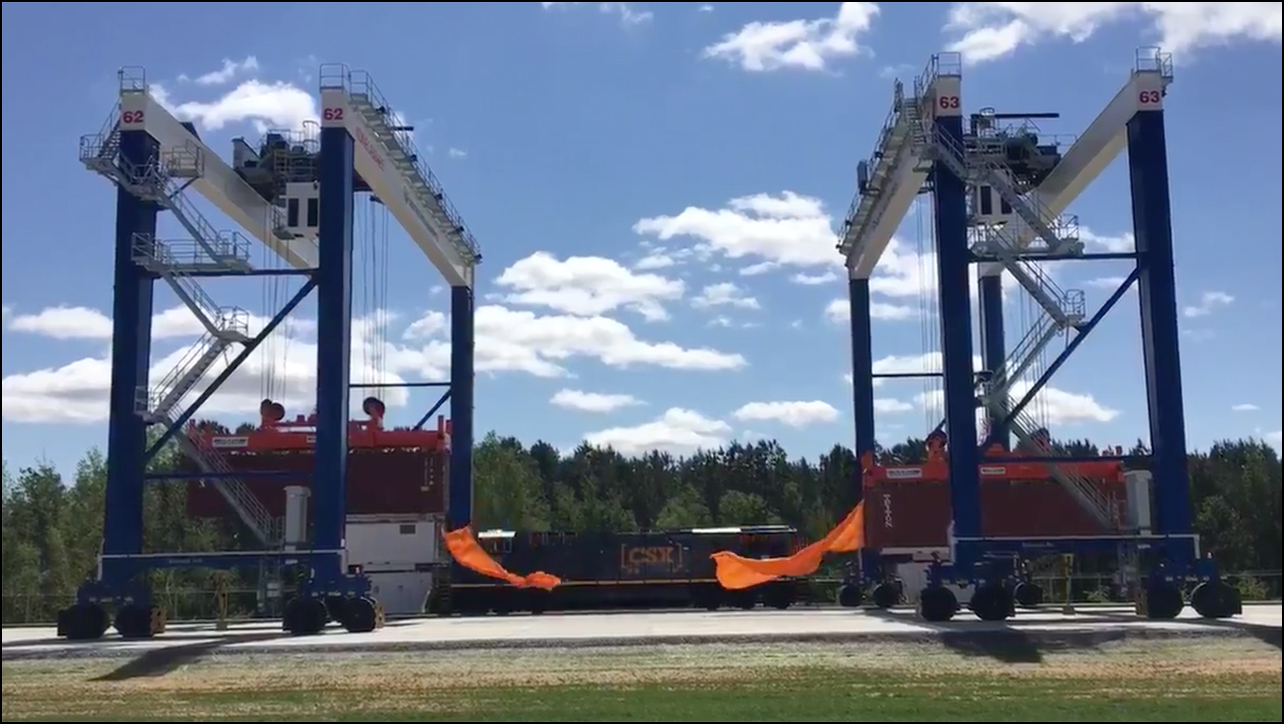 As its two container cranes broke a ribbon and with a CSX locomotive on hand, the South Carolina State Ports Authority opened Inland Port Dillon April 16. Screenshot from SCSPA video via Twitter

CSX has added another South Carolina stop on its intermodal route to inland markets.

The South Carolina Ports Authority on April 16 held the grand opening of Inland Port Dillon, its second state inland facility, to handle growth of intermodal rail cargo volumes and deepen its reach into markets through the Carolinas to the Northeast and Midwest.

“Inland ports provide needed infrastructure in the interior of the state to support the movement of freight to and from our marine terminals,” said Jim Newsome, SCPA president and chief executive. “The addition of Inland Port Dillon to the port’s network diversifies our reach and enables port users to gain logistics efficiencies through rail transportation of their cargo.”

Inland Port Dillon utilizes existing CSX intermodal service to handle container movement to and from the Port of Charleston’s terminals. The agency expects Dillon to convert an estimated 45,000 container movements from truck to rail in the first year of operation.

“Our ports system is one of the most important driving forces behind South Carolina’s recent economic success, and with the help of the Inland Port Dillon, it always will be,” said Gov. Henry McMaster. “With two inland ports and the Port of Charleston soon to be the deepest on the East Coast, South Carolina has strategic advantages that no other state has, and that will continue to pay off for the people of our great state.”

Rail intermodal volumes via Charleston have grown 180% since 2011; approximately 25% of the port’s container volume moves by rail.

“CSX is pleased to be a key link in extending the South Carolina Port Authority’s reach from the Port of Charleston to the Pee Dee Region of South Carolina through establishment of Inland Port Dillon,” said Dean Piacente, CSX Vice President of Intermodal. “We are confident that the Inland Port will promote economic development in the region and increase the competitiveness of the Port of Charleston and businesses throughout the State of South Carolina. CSX is proud of our role working together with the Port in converting the movement of containers from highway to rail, reducing highway congestion and providing environmental benefits to the citizens of South Carolina while promoting economic growth and commerce.”

The SCPA opened its first inland facility, Inland Port Greer, in the Upstate region of South Carolina in November 2013. Greer handled a record 124,817 rail moves in calendar year 2017, an increase of 20% from the previous year. Greer achieved a fiscal year-to-date record number of rail lifts, with 87,360 moves since July. The facility handled 10,612 rail lifts in March.

Ports along the U.S. East Coast have been investing in infrastructure upgrades, waterway deepening, new cranes and other equipment in a race to capture more container traffic moving on new-generation ultra-large container ships transiting the expanded Panama Canal. Most of these ports from Florida to New York are served directly by CSX, Norfolk Southern, or both railroads.

Major container ports on both coasts are in the process of developing inland container hubs, to ease congestion in and around their waterside locations.

Inland Port Dillon is located within the Carolinas I-95 Mega Site with close proximity to I-95, a critical transportation artery in the Southeast. The area is central to existing port users, including Harbor Freight Tools, which represent base cargo opportunities for the facility.

“Inland Port Dillon is a complement to the capacity and infrastructure investments underway at port facilities in Charleston to accommodate bigger ships and overall growth of our volumes,” Newsome said.

The terminal features two rubber-tired gantry (RTG) cranes, to move containers on and off trains.