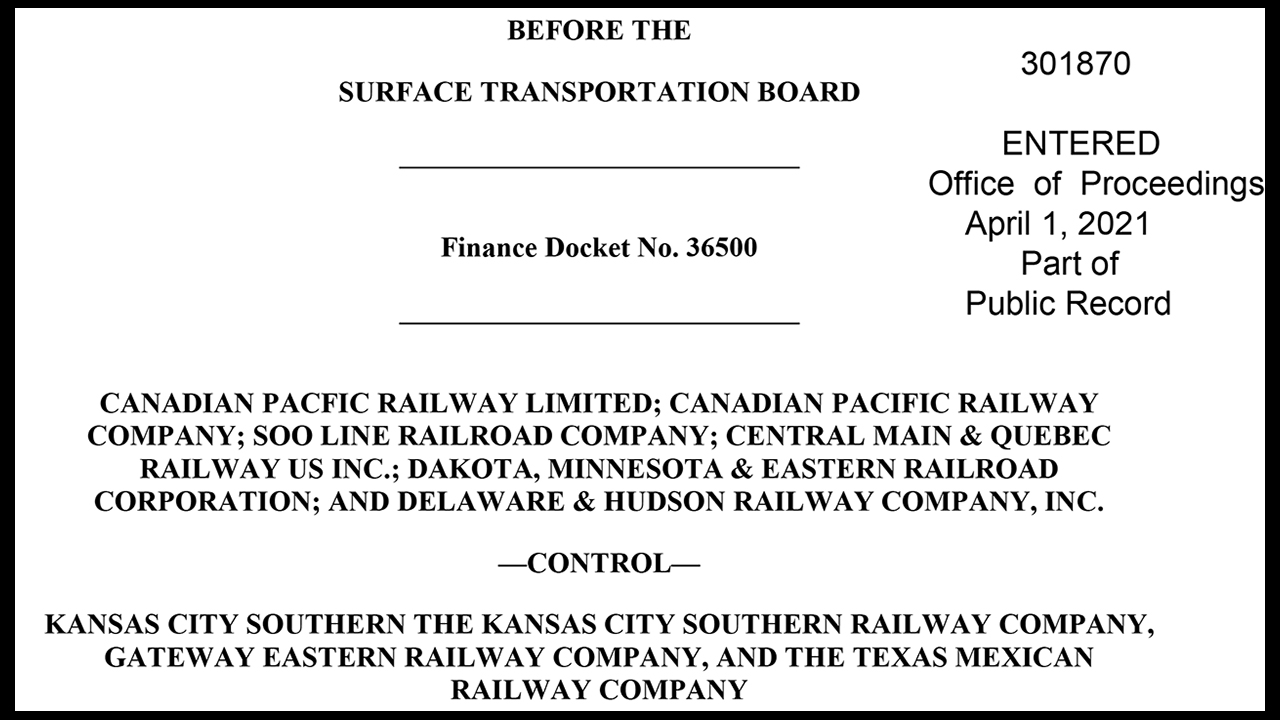 Several shipper trade associations, a major agricultural shipper and four of the remaining five North American Class I railroads have asked the Surface Transportation Board to review Canadian Pacific’s proposed acquisition of Kansas City Southern under the more stringent 2001 merger rules. A few argue that the smallest Class I rail carrier, KCS, should not get a “gentle pass” STB review. As to the merger itself, most support it, with a few notable exceptions.

Back in 2001, the STB set up some tougher regulatory review standards. The commissioners back then determined that the new acceptable public policy threshold would be a determination that there be a demonstrated pro-competitive impact. In effect, the merging railroads had to provide pro-competitive evidence in their applications to the STB.

Furthermore, the merger candidates had to demonstrate possible impacts from so-called “downstream effects”. That kind of vague comment suggested that the onus of determining a possible secondary reaction such as a reactionary following round of final consolidations by other competitors be laid upon any future first-mover applicants, who would be responsible for anticipating a probable competitive “final” mega-merger wave outcome possibly resulting in a long-term result of two or three so-called transcontinental rail networks.

One would think that STB itself would bear the intellectual burden of such futuristic analysis—which is presumably their public policy job.

The STB in 2001 gave KCS an exception, saying that the previous, more-relaxed merger application documentation guidelines and judgements would apply to a future KCS combination with almost any Class I. Now the next-smallest-size Class I, Canadian Pacific, has stepped forward with a friendly merger application that both railroads say meet the STB’s exemption clause for KCS. STB did leave an “escape clause,” saying that certain circumstances might suggest that the waiver be revoked.

No surprise: In 2021, a few shippers and shipper associations and four of the “Big Seven” Class I’s believe that the harsher threshold should be used.

CP immediately filed 259 support statements for both the waiver and the merger that included support letters from 23 Class II and Class III railroads, 214 shippers and 22 other rail stakeholders. (On April 6, the number topped 300.) In addition, Genesee & Wyoming, the largest small-railroad holding company, filed a support letter.

STB’s deadline to submit comments supporting KCS’s exemption was April 1. The result was 12 filings—four supporting the waiver and eight opposing it. Of the five other Class I’s, CN, BNSF, Norfolk Southern and Union Pacific oppose KCS’s waiver. UP also requested a full review of the voting trust whereby CP would acquire KCS shares. CSX, broke from its peers, submitting a letter supporting the waiver.

Six of the largest shipper organizations—National Industrial Transportation League (NITL), American Chemistry Council(ACC), Corn Refiners Association (CRA), The Fertilizer Institute (TFI) the National Grain and Feed Association (NGFA) and US Wheat Associates (USWA), collectively, the “Movants”—jointly submitted a motion (downloadable below) to revoke KCS’s waiver, arguing that the railroad has grown substantially since 2001, and the rail industry has changed dramatically since then. The six also requested “a proper and thorough review of this transaction to determine whether it is in the public interest,” though they qualified the request by stating that STB “should not construe this Motion as expressing Movants’ individual or collective opposition to the proposed transaction at this time.

Here’s where things stand on April 5:

As one analyst noted, “The shipper groups argue that the revocation of the waiver would help to ensure that gateways to competing rails are kept open, increasing competition. Additionally, the current merger rules require applicants to prepare Service Assurance Plans to help mitigate service disruptions, whereas CP and KSU would not be required to prepare this if the waiver was upheld. These shipper groups also bring up transnational issues and exploring potential alternatives to a merger. There is no statutory deadline for the STB to rule on KCS’s waiver, although our legal contacts expect that the STB will rule on titin the next 15-20 days. If the waiver is revoked, CP and KCS will have to demonstrate that their proposed merger is pro-competitive and in the public’s interest.”

Normally, you challenge something because “you” want something, maybe a special “commercial condition.” Interestingly, both the Mexican and Canadian governments are so far silent. That is indeed odd, since a majority of commercial rail trade patterns to be directly impacted by CPKC would involve Mexican and/or Canadian origin or destination parties.

I infer this from my previous experience at examining evidence about the economic and network evaluations of multiple planned mergers while I was at Conrail and at the USRA. I had access to up-close detailed merger pros and cons market changes and operational change reviews of every business plan deal between 1974 and 1996.

The CP-KCS transaction is atypical in one serious way. It is basically a three-nation change. So, I ask these public policy questions: Why would the STB presume to have sole jurisdiction over such a geopolitical territorial impact? Are the Canadian and Mexican public policy agencies and shippers to be ignored by the STB commissioners? Or invited by the STB to be parties of priority recognition before the commissioners?

CP and KCS have until April 12 to reply to the waiver objections.