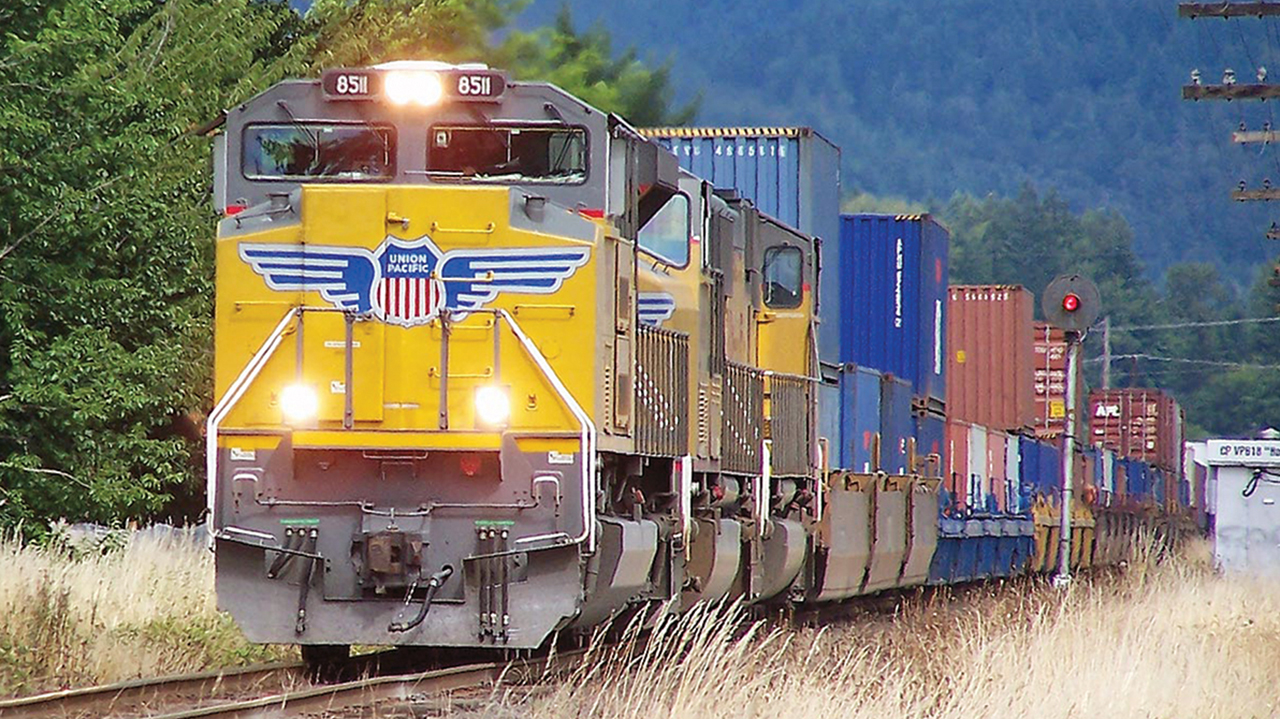 “Regarding PSR implementation, UP continues to sound positive, with strong improvements in train velocity and terminal dwell signs of this (though train speed in MPH has gotten slightly worse).”

Reporting on the Cowen and Company Global Transport Conference in Bosto, Managing Director and Railway Age Wall Street Contributing Editor Jason Seidl and analysts Matt Elkott and Adam Kramer offer these observations taken from the conference’s railcar/locomotive builder and Class I railroad panels, with a large trucker and a logistics/LTL company added for deeper perspective:

“According to two manufacturers, one being a panelist on our railcar and locomotive panel, railcar orders and inquiries may have softened a bit from already modest 2Q levels but have not fallen off a cliff. Another panelist noted stability in lease rates in some railcar types, but in others, such as DOT117 tank cars, which enjoyed a material surge over the past 1-2 years, rates have dropped significantly to around $850/month, roughly half their most recent peak. Secondary market valuations for railcars remain solid overall but have shown some softening in some car types. Prices of newly built cars, however, do not appear to have dropped despite demand softness, as prices of materials have risen, and some investors are prioritizing new cars over existing ones. We continue to favor Wabtec, Trinity and Greenbrier for patient, long-term investors, while acknowledging that upside may be limited in the immediate future due to rail traffic weakness and macro and geopolitical uncertainty. In case of a short recession, GATX could be a fairly defensive play.

“The locomotive new-build market in North America, according to our panel, is likely to be weak for the foreseeable future as rail traffic is down and PSR implementation remains under way. Locomotive modernizations, however, should remain fairly robust, with most railroads having plans to perform them on some units. When it comes to modernizations, Wabtec generates roughly half the revenue of a new-build but at much higher margins. Wabtec’s service revenue on existing locomotives should have upside beyond modernizations as the railroads increase utilization and as locomotives get more technologically complex.

“GATX noted its $4.85-$5.15 EPS guide for this year (unchanged, which is a slight positive given market weakness). The company earned $5.22/share in 2018. Spot railcar lease rates have likely softened somewhat over the last two months, even though management did not explicitly say that. We asked them about spot lease rates, which were still holding up well as of GATX’s 2Q19 earnings call in mid-July. The company refrained from commenting on how rates have trended since the 2Q call but said that, when rail traffic is down and railcar utilization is down, generally spot lease rates are affected. So, we think the implication is that spot lease rates have softened since July.

“GATX discussed current market dynamics: stronger in tank, weaker in freight. Backlog in tank cars is a little longer, which allows the company to push the lease rate a little more. Still about 15% of the fleet (17,800 cars) comes up for renewal this year. GATX can be a relatively defensive play in case of a short recession, protected by average lease terms and very low turnover in its shareholder base. GATX was most successful buying cars in 2007, 2008 and 2009, so it’s not too worried about a potential recession.

“Greenbrier noted that order and inquiry activity has not fallen off a cliff but has moderated somewhat from the company’s fiscal third quarter, which saw total orders of 6,500 units. Greenbrier appears to have achieved some progress in overcoming the transitory challenges it faced in Europe and Brazil the previous fiscal quarter. In Europe, market dynamics continue to be favorable for railcar manufacturers, something that GATX even alluded to in its own presentation. In light of the sell-off in Greenbrier shares this year, the company indicated that it would be open to boosting its share repurchases as one way of capital allocation. Longer term, Greenbrier could also consider accelerating its lease fleet growth and having a more conventional leasing operation.

“Though management teams continue to confront a challenging macro environment, company fundamentals remain fairly strong for the rail, intermodal, and LTL companies that presented on Day 1 of the Global Transport Conference. PSR implementations at Kansas City Southern, Norfolk Southern and Union Pacific are on track, and CN touted numerous growth areas for the intermediate- to long-term.

“Union Pacific lowered its 2H volume outlook, with the Class I now expecting 2H volumes to be down mid-single digits, lowered from previous guidance of down 2%. OR guidance of sub-61% of 2019 and sub-60% by 2020 was unchanged, though. Management continues to expect a peak season, a positive sign for companies across transportation and for the economy more broadly. When asked about the ongoing trade issues with China, UP noted that agriculture has been clearly hit by tariffs. With the U.S. as a top supplier of soybeans, UP isn’t sure that, should trade issues get resolved, the supply chains could ramp up in time with the soy bean harvest season rapidly approaching. Regarding PSR implementation, UP continues to sound positive, with strong improvements in train velocity and terminal dwell signs of this (though train speed in MPH has gotten slightly worse). Furthermore, UP’s trip plan compliance has seen a 7-point improvement y/y, and train length has increased 11% since January.

“Kansas City Southern Chief Marketing Officer Mike Naatz shared an update on the U.S.-Mexico Class I, noting that even with all of the macro and trade uncertainty, KCS has performed well and the outlook remains positive. U.S./Mexico trade has grown by 17% since 2016, even with all of the trade rhetoric, and KCS believes that Mexico is well-positioned to pick up stuff that moves out of China, especially as people become more comfortable with the Andrés Manuel López Obrador administration. KCS’s cross-border intermodal business is less truck competitive than intermodal services of strictly domestic U.S. Class I’s, so with trucking rates down y/y, KCS has been better positioned to maintain a grip on some of this truck-competitive freight. In addition, Mexico energy reform is going to be a key opportunity for KCS, as will new auto factories and other manufacturing that moves to Mexico. When asked about its PSR implementation progress, Naatz noted that the KCS had already started with “PSR-style initiatives” years before formally adopting PSR. Bringing in PSR veteran Sameh Fahmy greatly helped with the formal PSR implementation, once that was announced last fall. PSR initiatives are set to result in $55 million in cost savings in 2Q19. which follows $25 million in 1Q19. Naatz comes from outside the rail industry, where PSR-type strategy is almost normal.

“CN focused on structural growth opportunities that will benefit the intermediate- to long-term, even as volumes YTD have been lower than expected. Among these structural opportunities are the Port of Prince Rupert, which has volumes up 30% y/y and which is set to benefit from DP World increasing capacity by 300,000 and then 200,000 in 2020 and 2021, respectively. Second is the Port of Halifax, which CN calls the ‘Rupert of the East.’ Halifax is running well below capacity today, and, combined with CN’s investment in its eastern network over the past few years, positions them well to handle additional volumes in the East. Third is additional grain business, with 21 brand-new grain elevators in Canada, 14 of which are exclusive to CN. Crude by rail (CBR) commentary was mixed, with the possibility of the Alberta CBR contract coming to life once it is sold still possible, but with nothing imminent. Following 1H volumes of 3% RTM (revenue ton-mile) growth, 2H volumes in RTMs need to grow by roughly 7% to hit CN’s full-year mid-single digit guide. Volumes in the third quarter to date are only roughly flat.

“Norfolk Southern volumes are down 3%, the result of weaker coal carloads and intermodal softness from cheap truck pricing. NS expects volumes to be down in 3Q and flat in 4Q, compared to commentary from its 2Q earnings call that called for modest growth in 2H19, with the bulk of that in 4Q. NS’s version of PSR, TOP 21, is being implemented in full force, with significant improvements in reducing terminal dwell, train speed up 15-20%, cars online down 15%, and thousands of cars in storage. TOP 21 has also seen two hump yards recently switched to flat switching yards, and 285 mechanics furloughed in the past few days. NS expects truck pricing to increase in 2020, which should enable the it to grab market share from the highway, and believes that there is pent-up demand with retail and manufacturing inventories depressed. However, uncertainty in Europe persists. Finally, NS’s move to new headquarters in Atlanta is in full swing. NS has already moved its finance and executive team, and will be moving the rest of the team in summer 2021.

“Logistics/less-than-truckload (LTL) company ArcBest Corp., the first non-rail company to present at our conference, was, like its rail peers, in sharing a mixed but more optimistic than expected view on the state of the freight market and broader market. ArcBesthighlighted a tremendous opportunity to cross-sell among its existing products and services, as 78% of customers have a need for more than one logistics service offered by ArcBest, but only 38% of customers currently use ArcBestfor more than one service. By bringing this up to 40%, it would be ~$30 million in incremental revenue for the less-than-truckload carrier. Prior to presenting, ArcBest released an 8-K with operating results through August. Daily Billed Revenue decreased approximately 2.5%. Total Tonnage/Day decreased approximately 3.5%, the combination of a high-single digit percentage decrease in LTL-rated tonnage offset by double digit percentage increases in TL (truckload)-rated spot shipments moving in the Asset-Based network. Total Shipments/Day decreased approximately 3.5%, and Total Billed Revenue/CWT (hundredweight) increased approximately 1%, as a high-single digit percentage increase in LTL Billed Revenue/CWT, excluding fuel surcharge, was somewhat offset by lower Revenue/CWT on a higher number of TL-rated spot shipments moving in the Asset-Based network. Total Billed Revenue/Shipment increased 1% and Total Weight/Shipment was flat, with the weight/shipment on LTL-rated shipments down approximately 5%.

“J.B. Hunt Transport provided an update on its various businesses, including intermodal, dedicated, truckload, and logistics, noting that even with the general freight softness since the very end of 2018, in each of the past few months, there has been a sequential month-over-month improvement in outlook. One of the more positive anecdotes from day one of the conference was the head of J.B. Hunt’s intermodal division sharing that not a single customer has come to it and said that they don’t need as much capacity or that they are going to pull shipments forward due to fears of additional tariffs. That being said, volumes have been slow since December. Dedicated trucking fundamentals and the business pipeline continue to sound strong, and J.B. Hunt remains one of the bright spots in transports, in our view. Management continues to have expectations for a strong, healthy peak season. On the logistics side, J.B. Hunt has doubled the number of carriers on their J.B. Hunt 360 platform in the past few months. Positive feedback has been received from shippers thus far, though improvements on the shipper side of the marketplace still need to be made. Tariff impacts were a major focus of J.B. Hunt one-on-one meetings at our conference, but the company has not received much visibility from its customers. Finally, with a competitor’s last mile service being shut down in recent months, J.B. Hunt sounded positive on its service offering, noting that it is a $500 million business right now in a $12 billion-$15 billion market overall, and likely to grow, in our view, given the overall shift to e-commerce.”