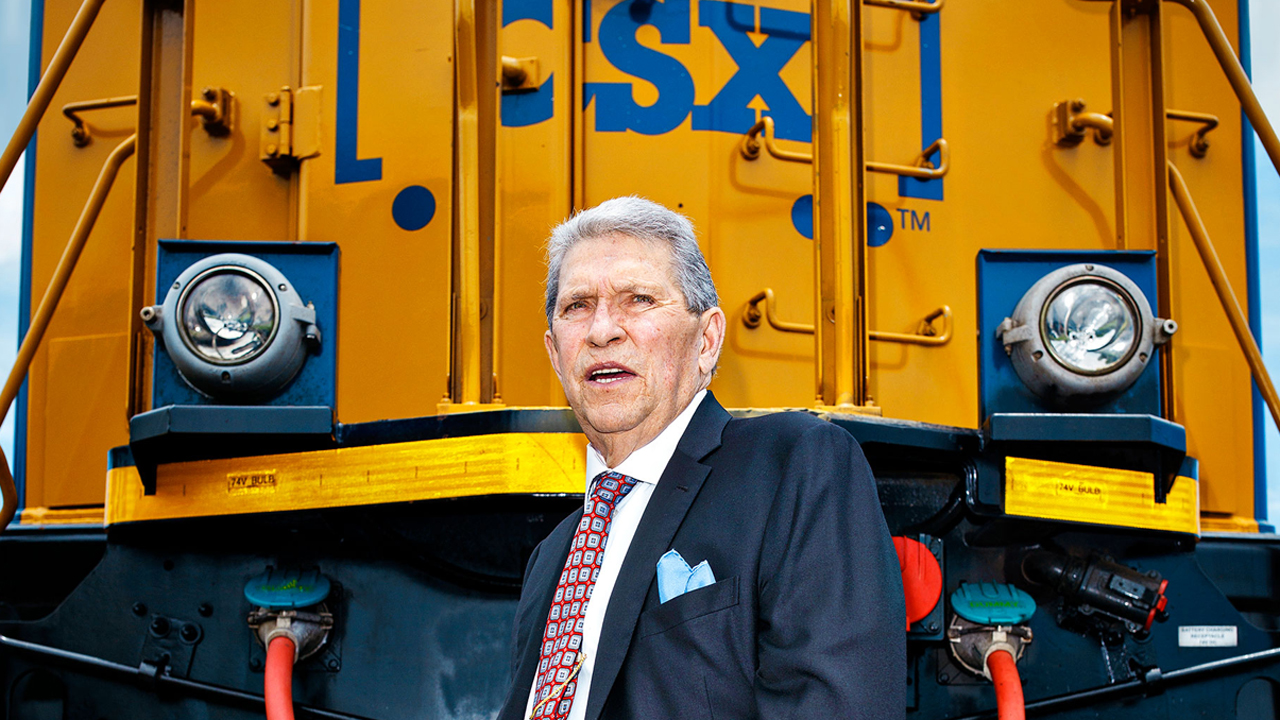 Out of a remote location in a corner of New England comes an interesting operations research view of what Precision Scheduled Railroading (PSR) is, and is not. Peter Swan, a Ph.D rail and logistics expert from the Penn State School of Business Administration, spoke Oct. 3 at the NEARS (Northeast Association of Rail Shippers) Fall 2019 Conference in Burlington, Vt.

Swan, who spent a decade working in the railroad industry, also taught at Penn State’s Smeal College of Business. He earned his Ph.D. in business administration at the University of Michigan Business School. He holds an MBA from the University of Tennessee and a bachelor’s degree from the University of Michigan. He has published in such journals as Journal of Business Logistics, Transportation Journal, Public Works Management & Policy, International Journal of Physical Distribution and Logistics Management, and Academy of Management Journal. His professional affiliations include the Transportation Research Board, Council of Supply Chain Management Professionals, American Society of Transportation and Logistics, and Penn State Center for Supply Chain Research.

So, in terms of directly taking on the task of demystifying so-called PSR as a freight business process, it’s no surprise that NEARS invited Swan to give a deep but understandable academic dissection of the strengths and weaknesses of the evolving versions of different PSR operational railway changes. NEARS is, after all, an educational organization among other things, and its leadership sought to have an independent review for members.

Following is my summation of Swan’s important technical conclusions, based upon the part of my freight railroad career that involved IT, operations research, logistics, marketing and finance. In a nutshell:

• PSR is not customer centric.

• PSR is not a volume growth strategy.

• PSR is focused on batched processing of train movements.

• PSR is not car asset utilization-focused; it is train movement-focused.

• PSR often ends up asking customers to change their rail use business process—regardless of the shipper’s customer inventory requirements.

Swan summarized his complex operational changes into an easy-to-read-and-hear “Process Management 101” college-level lecture, illustrating the logic of his findings with slides, two of which are reproduced here.

PSR in its initial phase-one rollout clearly looks to level the asset base costs of the railroad, regardless of the hit upon long-standing customer processing that has historically been in place in order for customers to use rail freight rather than trucking.  Its early changes try, in effect, to level the workload and asset base of internal railroad company yard movements and over-the-road train movements. It is not car-focused. PSR proponents hope that it will eventually become more car-focused and on-time-schedule-delivery-efficient.

But from Swan’s technical research to date, freight cars (often shipper-owned or -leased) are not part of the initial process improvement changes we are witnessing on the PSR-adopting railroad companies. Instead, train operational cost reduction and yard sweeps are the emphasis. Does this mean more loaded car cycles per year? Hardly.

If the PSR principles being executed were resulting in higher loads per year, then we might conclude that improved railway freight movement was the ultimate benefit sought. But there is little evidence in Swan’s research that demonstrates early improvements in customer inventory meticulousness, like delivery. At least not initially.

Swan does acknowledge that customer benefits might be achieved later. But the railroad report card metrics monitored by the STB (Surface Transportation Board) and by railway customers don’t identify those kinds of delivery improvements. Instead, railroads practicing PSR changes repeatedly emphasize “shareholder value.” Record financial returns and cash flow diversion to shareholders in press releases from railroad headquarters overwhelmingly emphasize those results. The number of reported financial results drown out the number of times customer real-time benefits get mentioned as numerical evidence by railroad press statements.

At the freight-car-carried customer inventory level, carload traffic is not yet close to running on-schedule for the final delivery placement–let alone precisely. On-time day of expected final car delivery to received is at best, for carloads, about 70% to 80%. Translation: The 20% to 30% failure rate of on-time car delivery can mean a one to two or more day-late arrival of freight cars, each containing costly delayed inventory.

Swan challenged the mixed shipper and railroad carrier NEARS audience to consider these basic questions about the evidence so far. He acknowledged that the PSR carriers might change. They might become far more customer-benefit-attentive. He did not single out an individual carrier to attack, sticking to a review of the changes happening so far as revealed in evidence from STB hearings. He stuck to the essential process improvement metrics used in standard industrial process study literature and simulation models as his documentation.

Almost no one in the audience, during the Q&A session, really challenged Swan’s data or his process pattern disclosures. In part, there was a noticeable listener silence when the mathematical and statistical logic was presented in Swan’s slides. His operational improvement metrics and definitions were not what the PSR promotional literature leads us to believe.

Much like factory streamlining of manufacturing lines, PSR has taken out low-hanging costly and wasteful procedures. It has standardized around asset minimization—leaving little business surge capability, and often reducing specific manufacturing line capacity (translated, in railroading terms, to “traffic-per-day capability”).

Swan’s findings suggest that STB-mandated weekly reporting metrics might be presenting “data noise,” rather than production and service delivery intelligence. The regulators might want to reconsider what they are actually measuring as to its relevance in interpreting what is going on with PSR execution.

Is there, in fact, a positive national public service benefit from PSR? Probably not at this point. If there are public service benefits, they are not yet statistically apparent. What has been proven are PSR private-carrier internal network efficiency benefits and stockholder benefits—unless, as Swanwas asked by the audience, shippers can prove that they like the PSR recipe, and that, as customers, they want more PSR. Only then will the case for PSR shipper benefits be in evidence.

The above interpretation of Peter Swan’s research is mine. I encourage readers to reach out to NEARS or to Swan directly for his presented materials. Only a portion of his findings has been included here. The above text reflects my interpretation as a railroad economist and engineer.