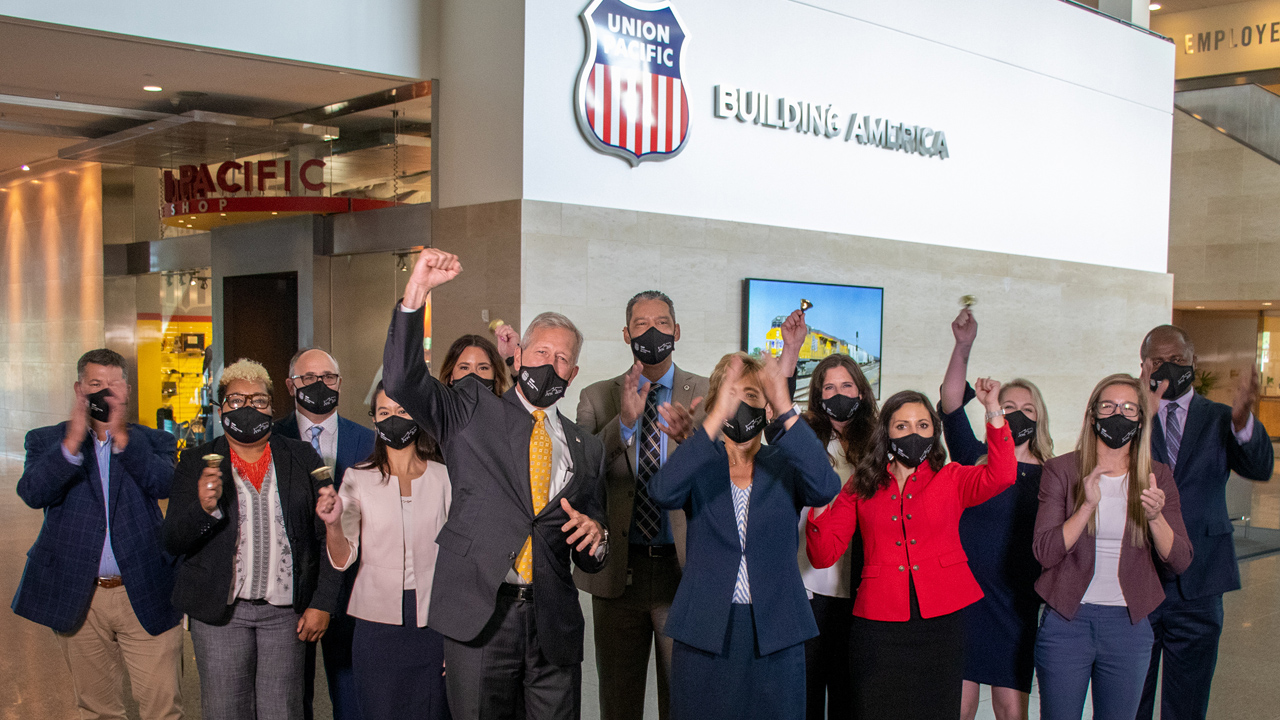 Union Pacific was listed on the New York Stock Exchange on Sept. 15, 1870, one year and four months after the Golden Spike was driven at Promontory Summit, Utah, on May 10, 1869, to complete the nation’s first transcontinental railroad. To mark the 150th anniversary of its NYSE listing as UNP, UP officials virtually rang the Closing Bell at 4:00 p.m. EDT on Sept. 15, 2020.

“It is an honor to celebrate this historic milestone and the company’s ascension to the longest-listed transportation company and largest railroad traded on the New York Stock Exchange with the financial community and our dedicated employees,” said UP Chairman, President and CEO Lance Fritz, who led the virtual ringing from the company’s Omaha headquarters. “Their relentless focus on our customers is transforming Union Pacific more than 150 years after President Abraham Lincoln founded our company.”

“The ingenuity of its employees helped transform Union Pacific’s network by streamlining operations and focusing on safe, efficient and reliable rail service that customers can count on,” the railroad noted. “Operating changes implemented over the past two years improved shipment arrival times for customers, contributing to Union Pacific’s record-high stock price achievement in 2020. Initially trading on the NYSE at less than $27 per share, Union Pacific has had seven stock splits and paid dividends on common stock for 121 consecutive years.”

“As a company that has operated for more than a century and a half, sustainability is built into the fabric of Union Pacific’s performance,” UP said. “The company’s sustainability is powered by Union Pacific’s deep commitment of service and growth that builds better futures for its employees, customers, shareholders and communities. Its continuous circle of innovation helps the company withstand the test of time and become stronger after emerging from unforeseen challenges. Union Pacific is ready to support America’s post-COVID 19 comeback with reliable rail service that will help current and future customers grow.”

Union Pacific is one of 20 companies in the Dow Jones Transportation Average (DJTA), sometimes simply known as the “Dow Transports,” a price-weighted average of 20 transportation stocks traded in the U.S.:

Union Pacific is the only one of the original DJTA components to continue in the index, the oldest U.S. stock index, first compiled in 1884 by Charles Dow, co-founder of Dow Jones & Company. The DJTA initially consisted of nine railroad companies and only two companies from outside the railroad industry. The Dow Jones Industrial Average (DJIA) grew out of the original Dow Transports index.

According to the website Investopedia, the DJTA “is closely watched to confirm the state of the U.S. economy, especially by proponents of Dow Theory. This theory maintains that as the industrials make and the transports take, the DJTA should confirm the trend of the DJIA. A divergence indicates a potential reversal of the trend. In other words, if the DJIA is climbing while the DJTA is falling, it may signal economic weakness ahead. A divergence means goods are not being transported at the same rate at which they are being produced, suggesting a decline in nationwide demand. Changes in the DJTA are rare, and they usually only happen following a corporate acquisition or other dramatic shifts in a component’s core business. Transportation is much less important to the overall stock market than it was when the DJTA was created. However, transportation stocks can follow a different pattern than the rest of the market. Sometimes, they can help traders and investors to predict changes in the market.”