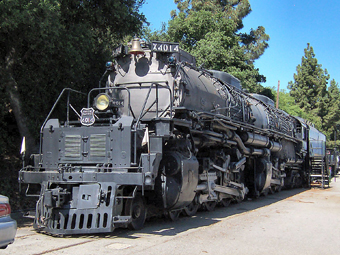 One of the largest and perhaps most famous steam locomotives ever built—Union Pacific’s articulated 4-8-8-4 “Big Boy” No. 4014—will be restored to operating condition by UP’s Cheyenne, Wyo.-based Heritage Fleet Operations within the next five years. 4014 will join UP’s two other famous steam locomotives—4-6-6-4 Challenger 3985 and 4-8-4 Northern 844—in excursion service when her restoration is completed. She will become the world’s largest operational steam locomotive.

On July 23, 2013, UP announced that it had reached an agreement with the Southern California Chapter of the Railway & Locomotive Historical Society in Pomona, Calif., to transfer ownership of 4014 back to UP. The railroad will relocate 4014 to Cheyenne, where the Heritage Fleet Operations team will begin restoration, including a fuel conversion to No. 5 oil. Details regarding those efforts will be made public at a later date.

UP donated 4014 to the historical society on Dec. 7, 1961. The locomotive arrived Jan. 8, 1962, at its current display location at the Rail Giants Train Museum in Pomona.

“No other railroad has retained its historical equipment or honored its American roots like Union Pacific,” said Union Pacific Heritage Operations. Senior Manager Ed Dickens. “Our steam locomotive program is a source of great pride to UP employees past and present. We are very excited about the opportunity to bring history to life by restoring No. 4014.”

Twenty-five Big Boys were built exclusively for Union Pacific by the American Locomotive Company (Alco) between 1941 and 1944, in two groups of ten and one of five. All burned coal, with large, 150-square-foot grates to burn the low-quality Wyoming coal from mines owned by the railroad. They were designed to pull long, heavy freight trains (maximum rated tonnage of 4,040 tons) at a sustained speed of 60 mph once past the Wasatch Range mountain grades on UP’s main line between Ogden, Utah, and Cheyenne. Peak horsepower was reached at about 35 mph; optimal tractive effort at about 10 mph. 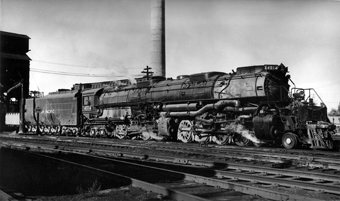 The Big Boys were 132 feet long and weighed 1.2 million pounds (engine and tender) in working order. 4014’s 14-wheel tender can hold 24,000 gallons of water and 28 tons (56,000 pounds) of coal. She features 68-inch drivers, 300 pounds of boiler pressure, maximum tractive effort of 135,375 pounds, and a 4.00 factor of adhesion. Her evaporating surfaces (boiler tubes, flues, firebox, and circulators) and superheating surface encompass 5,889 and 2,466 square feet, respectively. The massive locomotive’s frame is of the Mallet, or articulated (hinged) design, to allow curve negotiation. Without the tender, the Big Boy had the longest engine body of any reciprocating steam locomotive.