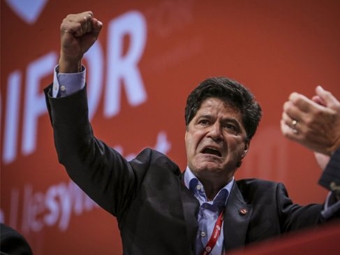 Unifor, the largest union at CN, with more than 4,800 members (mechanics, clerical workers, excavator operators, locomotive engineers, and truck drivers) covered by six collective agreements, said on Feb. 19, 2015 that it will be commencing strike votes at CN as of early the week of Feb. 23 “after five months of futile negotiations.” The union’s current collective agreement expired on Dec. 31, 2014, and negotiations had been taking place since September.

Unifor President Jerry Dias made the announcement at a press conference following a meeting of union workplace representatives at CN and Canadian Pacific. The group was brought together to review the contents of the CP package, which was approved and will be voted on by CP’s 1,800 Unifor-represented employees. Dias said that Unifor was able to reach an agreement with CP because CP “made a number of improvements including rail safety and working conditions.” CN, he said, “is trying to get a discounted settlement by counting on the government to cut off collective bargaining with back to work legislation. CN is highly profitable, even more so than CP, yet somehow it is claiming it cannot meet the pattern agreement that we established at CP.”

Dias said the union “will be setting a strike deadline close to the end of March to allow CN customers to make alternative arrangements. The union and its members are not pleased to be forced into this position. Companies like CN should not be leaning on government to interfere in collective bargaining.”

CN responded to the Unifor’s strike threat by saying that it “has reached amicable contract renewals with four unions other than Unifor in the current round of bargaining, including the Teamsters (1,800 locomotive engineers) last weekend and North Quebec Territory Teamsters locomotive engineers and conductors yesterday. CN’s offer to Unifor is fair, competitive, and fully in line with these pattern deals. Under CN’s offer, the company’s Unifor employees would remain the highest paid of their trade in the Canadian rail industry.”

“CN believes today’s strike vote announcement by Unifor is both unfortunate and unnecessary,” the railroad said. “CN’s principles will not be shaken by a month-long process to seek a strike mandate that would only raise uncertainty in the company’s customer base. The differences between the parties are as clear today as they will ever get. So CN believes a negotiated settlement regarding its Unifor employees’ wages and terms of employment remains the best solution. CN continues to be committed to bargain in good faith for a renewal of the collective agreements as soon as possible. It is also prepared to send outstanding contractual issues between the parties to binding arbitration.”

CN also reiterated its opposition to what it says is Unifor’s insistence on the railroad contributing to the union’s political causes:

“CN has asked Unifor again today to focus its bargaining on the terms and conditions that apply to the company’s employees. CN is not prepared to negotiate cash contributions to the union’s political and community fund. This is not an issue about charity; CN is willing to support charitable causes jointly with Unifor. The real issue is one of principle—CN is not prepared to allow financial matters related to the union itself to take precedence over the interest of the company’s employees.

CN also sent an internal Labour Update to all members of Unifor and their company managers, reproduced here in its entirety:

“Last weekend, we negotiated simultaneously with both the TCRC (representing our locomotive engineers), and Unifor representing our shopcraft, clerical and intermodal employees. After intense negotiations, we concluded a fair agreement with the TCRC that is now out for ratification. As recently as yesterday, we announced another ratification of a TCRC deal recently concluded with our Northern Quebec conductors and engineers. During the past two months, we have also negotiated fair and competitive deals with the USW track workers and the TCRC Rail Traffic Controllers. This underscores our ability to reach amicable labour deals when the focus of the negotiations is properly centered on our employees’ terms and conditions.

“The complete offers we presented last Sunday to Unifor were fully in line with these recent collective agreements in terms of what matters the most to you: wage and benefit improvements. It is important to note that these competitive offers did not require any meaningful concessions to your work rules, or to other matters such as pensions. They also maintained Unifor represented employees working at CN as the highest paid in their trades in the Canadian rail industry. We are the leader in this industry because we employ the best railroaders, so you deserve the competitive package we have offered.

Unfortunately, earlier today, Unifor announced that it has now decided to conduct a strike vote, deliberately highlighting that it will take as long as a month to do so. Unifor said its plan is to use such a long period to build pressure and ensure ‘the customer base has the ability to react’ with the risks that business will be moved away from CN. As you know, helping our customers win in the marketplace is at the heart of CN’s agenda. And it is that agenda of Operational and Service Excellence that is helping CN grow faster than our competition, most particularly in the Intermodal sector that is so important to many of you. It should be no surprise then that our workforce represented by Unifor has increased by more than 20% over the past five years. Protecting the relationship that we have worked so hard to build and supporting the momentum with our customers are key priorities, and so we must reflect on what the impact of a strike vote could be in that context.

Our hope is that we can still conclude a negotiated agreement with Unifor that is fair to our employees, and will help us continue to grow our business together. We have asked Unifor again today to bargain with us over the terms and conditions that apply to our employees. As our CEO, Claude Mongeau, publicly stated yesterday, we are not prepared to negotiate cash contributions to the union’s political and community fund. This is not an issue about charity; we are willing to support charitable causes jointly with Unifor. The real issue is one of principle, and it is that we are not prepared to allow financial matters related to the union itself to take precedence over the interest of our employees. From our point of view, today’s strike vote announcement by Unifor is both unfortunate and unnecessary. Our principles will not be shaken over the next four weeks, and our differences are as clear today as they will ever get.

As such, we encourage you to reflect on what matters most, and to make your voices heard within your union as part of a healthy collective bargaining process. We all want the same outcome to emerge and, with good faith, there is still time to avoid this dispute from escalating further. Reaching a negotiated deal on what matters to our employees is the best solution. And, failing that, the next best alternative would be to agree to binding arbitration as CP and the TCRC just did last Monday after a work stoppage. We remain committed to achieve that goal and are available to discuss either approach with your labour representatives from Unifor.”