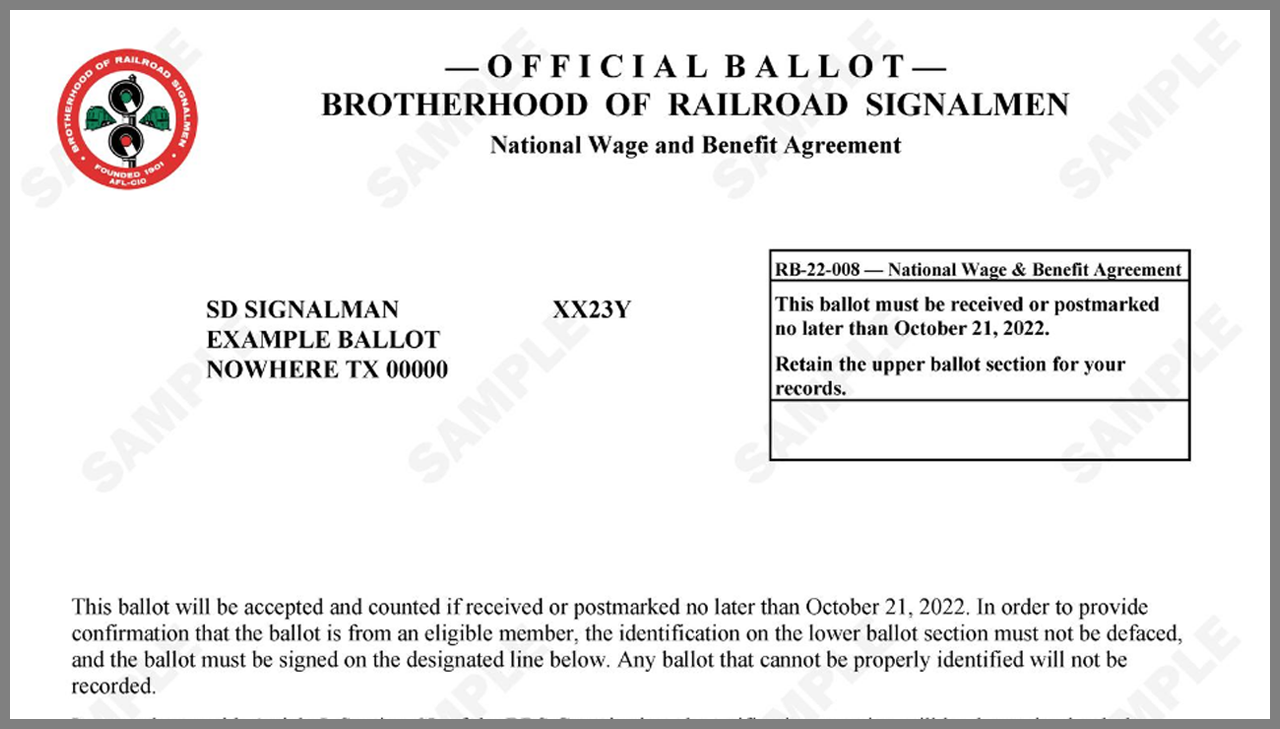 The Brotherhood of Railroad Signalmen (BRS) on Oct. 26 became the second of 12 rail unions to reject a tentative agreement amending wages, benefits and work rules on most Class I railroads and many smaller ones.

More than 60% of signalmen voted to reject the agreement, mirroring the 57% rejection rate of the Brotherhood of Maintenance of Way Employees Division of the Teamsters Union whose votes were announced Oct. 10.

All 12 unions and the railroads previously agreed to maintain a status quo until “early December,” meaning no strike or management lockout until all 12 rail labor unions have completed the contract vote ratification process and made one last attempt to avert a strike or lockout.

Unless carriers agree for a third time to offer deal sweeteners, a nationwide rail shutdown—the first since 1992—is looming, as a strike by even one union likely will cause picket lines to be honored by employees of all other unions. Carriers also could lockout the workforce at the end of this mutually agreed to status quo period, as it did in 1992 when just CSX was struck.

Another alternative is for Congress to pass preemptive legislation ordering carriers and all 12 unions to accept either the tentative agreement rejected so far by the BRS and BMWED, or less generous recommendations made in August by a neutral Presidential Emergency Board (PEB). Both sides also could agree to binding arbitration to settle this round of negotiations, or labor chiefs could override their members’ “no” votes (as has occurred in the past).

Congressional action to end a nationwide rail shutdown, no matter its impact on the national economy and national defense, is iffy, even though preemptive legislation has been drafted by Sen. Richard Burr of North Carolina—the senior Republican on the Senate Labor Committee. The draft is being circulated for comment among Republicans and Democrats in the House and Senate. Other draft bills are likely to surface.

Former Biden Administration Labor Adviser Seth Harris recently warned, “Congress could legislate a resolution, but the hyper-partisanship that surrounds labor policy in the U.S. Congress makes finding 60 votes for any solution in an evenly divided Senate a long shot, at best.” The 60-vote threshold is to avoid a filibuster—an event of greater likelihood during lame-duck sessions of Congress as will occur following Nov. 8 elections.

The rejecting BMWED and BRS represent some 25% of rail unionized employees affected by the tentative deal. Six rail labor unions have voted to ratify, representing about 19% of affected employees.

Four other unions, including the two largest—the Brotherhood of Locomotive Engineers and Trainmen (BLET, a Teamsters affiliate as is the BMWED) and the Transportation Division of the International Association of Sheet Metal, Air, Rail and Transportation Workers (SMART-TD), together representing almost half of unionized rail workers—will release vote results Nov. 17.

In announcing the negative vote tally, BRS President Michael Baldwin said, “For the first time that I can remember, the BRS members voted not to ratify a National Agreement, and with the highest participation rate in BRS history.”

Although Baldwin negotiated the tentative deal on behalf of the BRS, and signed his name to it, he said, “I have expressed my disappointment throughout the process in the lack of good-faith bargaining on the part of the NCCC (National Carriers Conference Committee), as well as the part PEB 250 played in denying BRS members the basic right of paid time off for illness. The NCCC and PEB also both failed to recognize the safety-sensitive and highly stressful job BRS members perform each day to keep the railroad running and supply chain flowing.”

The two other unions in addition to BLET and SMART-TD yet to announce voting results are Division 19 of the International Association of Machinists (Nov. 5) and the International Brotherhood of Boilermakers, Iron Ship Builders, Forgers and Helpers (Nov. 11).