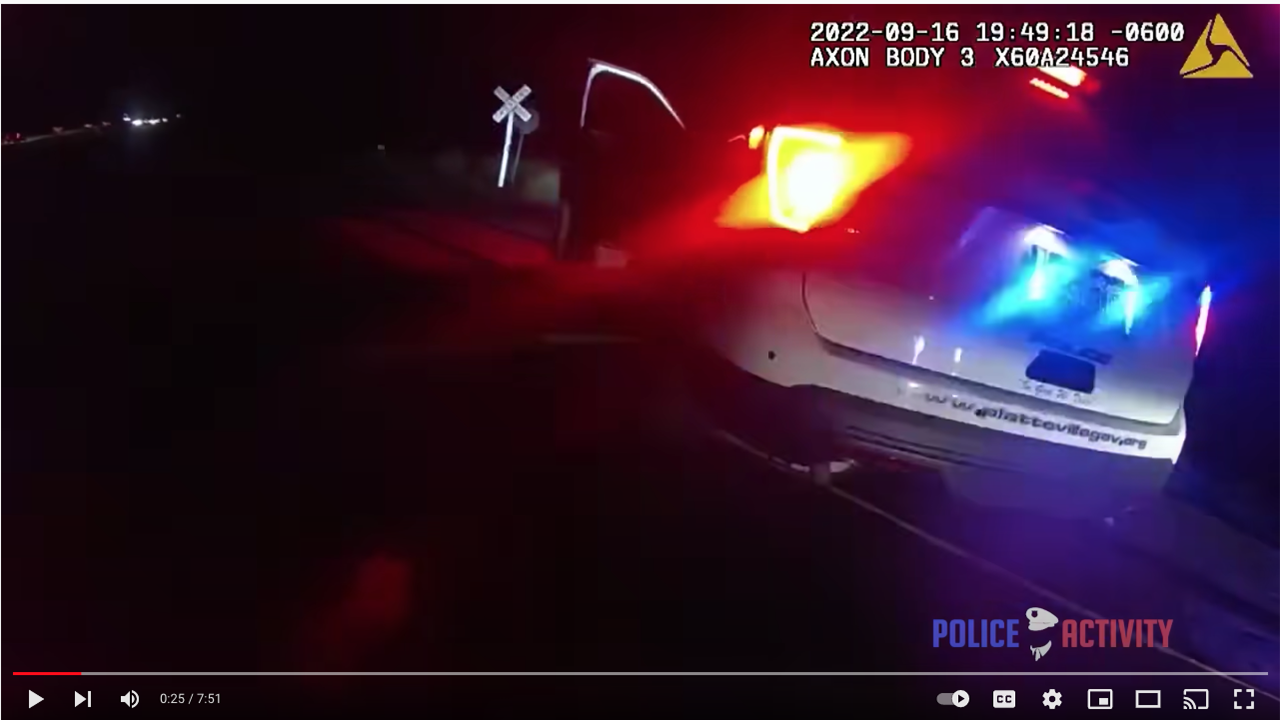 On the night of Sept. 16, Colorado police officers stopped a young woman driving a pickup truck, arrested her, and placed her in a police car—which the officer who made the stop had parked on active Union Pacific tracks on a crossbuck-protected crossing.

A newly released video on the PoliceActivity YouTube channel with police bodycam and dashcam footage (below) shows the moment the freight train struck the police patrol vehicle with the 20-year-old woman handcuffed in the back seat, as well as what took place before and after the crash.

According to the Colorado Bureau of Investigation (CBI), a Platteville police officer pulled over Yareni Rios-Gonzalez in Weld County, near Highway 85 and County Road 38, after an alleged road rage incident involving a gun. Two Fort Lupton police officers arrived at the scene and placed Rios-Gonzalez in the back of the Platteville officer’s car, which she had parked on the railroad tracks at the crossing. While the three officers were searching Rios-Gonzalez’s pickup truck for weapons, a train horn can be heard. As it gets closer, the officer who stopped Rios-Gonzalez realizes the car is on the tracks and is heard saying “Oh my God!” Another begins yelling “stay back!”

The train, estimated to be operating at 40 mph, demolished the police car and pushed it 100 feet or more down the tracks, according to various reports.

The location is on the UP Greeley Subdivision main line between Denver and Cheyenne.

CBI said Rios-Gonzalez suffered “serious bodily injuries,” including multiple broken ribs, a fractured sternum and a wound to her back and head. The video, released by the Platteville and Fort Lupton police departments, also shows officers searching her vehicle. The Platteville police officer involved is on administrative leave while an investigation is under way.

Editor’s Commentary: How is it possible that three trained police officers from two departments, who in the video appear to be handling the situation “by the book” and treating the suspect fairly and with respect, not realize the police cruiser, illuminated with headlights and emergency lights, is parked on railroad tracks? Union Pacific bears no responsibility here, in our opinion. We infer that the officers’ situational awareness training did not include railroad rights-of-way. And this unfortunate incident happened during Railroad Safety Week. Our industry is diligent about training first-responders proper procedures for railroad-related emergencies, such as a derailment involving a hazmat spill. Let this sad story be a lesson-learned for all law enforcement. The message is basic and common-sense: Don’t stop on railroad tracks, much less park on them. – William C. Vantuono