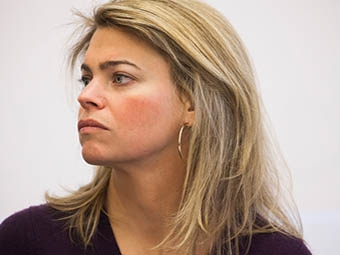 Sarah Feinberg, chief of staff for Secretary of Transportation Andrew Foxx, has been chosen to become Acting Federal Railroad Administrator, according to a Reuters report of an email sent by Foxx on Sunday, Jan. 11, 2015.

As acting administrator, Feinberg’s ascension does not require confirmation by the U.S. Senate. Feinberg will replace Joseph Szabo, who last November announced his intention to step down on Jan. 1, 2015.

Feinberg joined the Transportation Department following the derailment and explosion of a train in Lac-Mégantic, Quebec, on July 6, 2013, which killed 47 and heightened scrutiny of railroad haulage of crude oil products, particularly those generated in the Bakken field in North Dakota and nearby locations.

She also served as a special adviser to President Obama’s first chief of staff, Rahm Emanuel, for two years, before holding positions with Bloomberg L.P. and Facebook, serving the latter as director of communications.

Feinberg holds a B.A., graduating from Washington and Lee University in 1999.