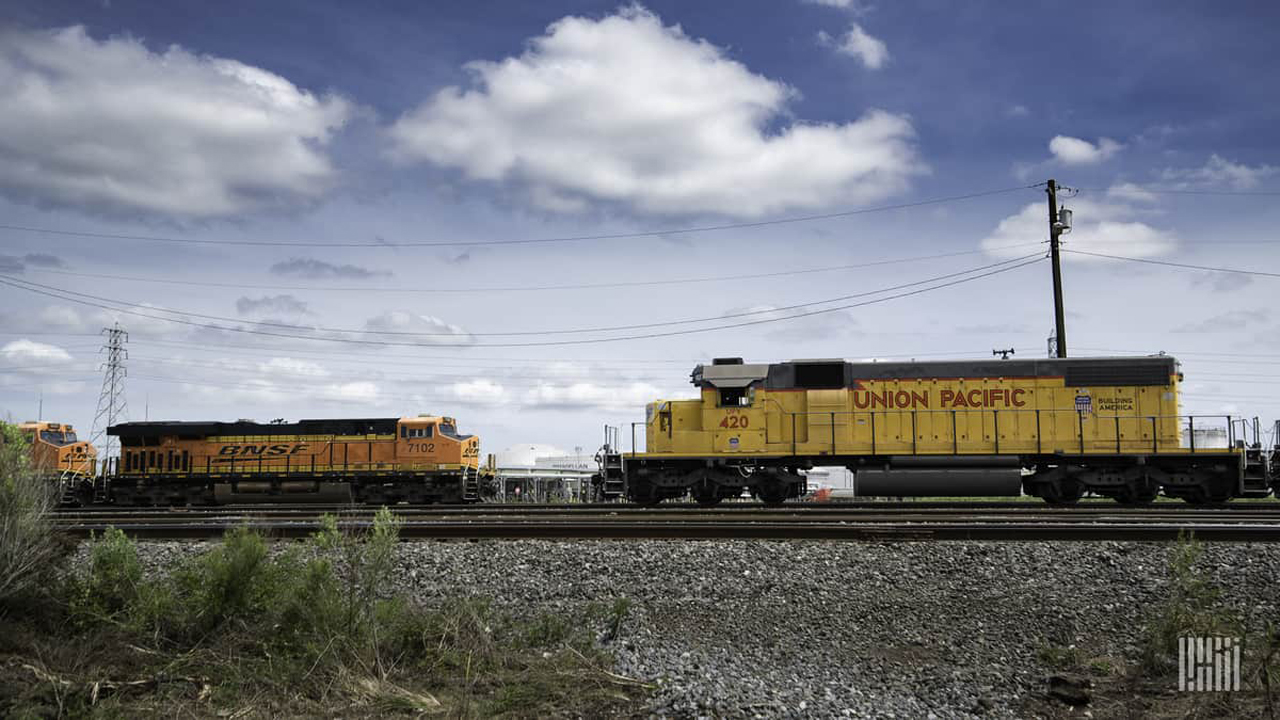 About once a year, someone pens a North American rail merger column. Why not one from a rail economist? This is not a “will happen” projection. It’s a strategic scenario question.

If a merger proposal is announced, here is a quick checklist of what you will want to examine as to details:

For many, the most recent serious merger was CN’s Illinois Central and Elgin, Joliet & Eastern integration. CN created a three-ocean link-up from New Orleans via Chicago to Halifax in the East and Vancouver and Prince Rupert in the West. Ironically, transcontinental west to east and north to south rail service between the oceans is offered within the United States only by a Canadian company.

Two decades later, everyone in the U.S. seemed comfortable with the rail status quo. An exception was the late E. Hunter Harrison. He wanted to push the opportunity for a $30 billion merger (really, a hostile takeover) between Canadian Pacific Railway (CP) and Norfolk Southern (NS). Interesting how the Canadians were the aggressors. (Editor’s Note: “The Canadians” weren’t the aggressors. It was U.S. hedge fund Pershing Square Capital Management and its leadership, Bill Ackman and Pauk Hilal, who had lured Harrison out of retirement in a hostile takeover of CP. Hilal later brought Harrison to his final CEO post at CSX in a “friendly” deal worth close to $100 million. — William C. Vantuono)

A CP-NS merger would have been the first to test Surface Transportation Board regulatory rules for railroad mergers set in 2001. It would have had to prove it was pro-competition. Norfolk Southern shareholders and rail customers seemed to prefer to go it alone. Other Class I’s (Union Pacific, the most vocal) pushed back. CP abandoned its efforts before the STB could see how its pro-competition rules might be applied. I am not sure that the U.S. Department of Transportation ever voiced its opinion. (Editor’s Note: The U.S. Department of Justice and Department of Defense did.)

There has been a two-decade-long merger hiatus. There has been no intellectual study of the issue, and no test of the STB rules that any proposed acquisition or merger demonstrates increased competition. Therefore, the industry has generally ignored the continually diminishing rail freight role as inconsequential public policy. Too harsh a critique? Maybe not. What is the role of the modern-era STB regulator?

A World Without Railroad Mergers?

Think of that possibility. What if there had been no mergers? An early 1960s report showed that there were as many as 6,000 railroads in the United States at one point in time. They all started as small operations, when waterways and the horse and buggy were the competition. By the turn of the 20th century, the number was down to about 1,200 railroads, then down to around 410 by 1955. Then the number dropped to just 76 Class Irailroads. Today, there are just seven Class I’s, plus with more than 500 Class II and Class III carriers.

Some say that the seven Class I’s are just too large to be effective and service-oriented. But that “too big” size assumption pales against the high efficiency of organizations like United Parcel Service, Federal Express and the U.S. military logistics command service. They are not too big.

There is no financial necessity caused by any of these seven Class I’s being likely to fail in the near-term. That failure risk argument drove U.S. government to create Conrail in 1976 from six bankrupt Northeastern carriers (Penn Central the largest), and then the later Denver & Rio Grande Western Railroad/Southern Pacific Railroad merger. Later still, the Southern Pacific-Union Pacific merger had some elements of rescuing a struggling carrier. That is not the case in 2020.

What might be the central argument for a 2020 to 2023 merger period is the slowdown in rail freight. The volume gains year-over-year have been falling behind trucking gains. This was noted well before the coronavirus pandemic hit. The exception might be in Canada, and possibly along some Mexican corridors.

In the U.S., there are signs that the Class I’s are losing market share and relevance. They are not going out of business. They are just not growing as our economy diversifies away from industrial rail-moved goods. And so far they have developed no replacement for lost coal traffic.

One left-behind growth market to note is the Midwestern region, where the rail carrier ownership of eastern vs. western distinction leaves a shallow region of states with a lower service role. That shadow area covers the Mississippi River drainage area, where the cost of a two-railroad interline movement makes rail freight a poorer choice against the often-available single company service crossing those states. It’s a type of cargo desert. Some might compare it to the market shadow effect when a large airport hub like Chicago O’Hare competes with nearby Milwaukee International Airport.

The simple translation is that cargo from Indianapolis bound for Des Moines or from Little Rock to Louisville suffers from a two-carrier required interline rail haul. Those hauls are not as cost-competitive as the single-carrier Pittsburgh to Des Moines rail movement with Norfolk Southern (including trackage/haulage rights).

Interline service, because of an ownership boundary along the Mississippi River region, adds both delay cost (time) and an added car switching expense. The added expense is to cover yarding costs, plus two railroads seeking to add a charge that covers their respective general and administrative costs and profit margins. After a transcontinental merger, the “market shadows” would disappear.

What were the key efficiency improvements over the past four decades? The following bullet points illustrate the low to high success rates by five performance areas within a railroad. Consider them relative accomplishments:

A last wave of big company rail mergers isn’t inevitable, and is not even necessary. But it is possible if growth is the next strategic goal. A merger (or mergers) could produce both a corporate benefit and an added geographic coverage public benefit. Perhaps the biggest hurdle is this: Well over half of global corporate mergers never achieve their major business objectives. There is plenty of research on mergers that failed. It is also true that not every railroad merger was successful.

Yet, if the current railroad freight business model has run its course and the growth plan is now to “milk” the network assets as market share diminishes, then a last round of mega-mergers might be a reasonable alternative. A well-designed merger could assist a new railroad pivot toward more customer volume growth rather than margin growth.

As transportation journalist Michael W. Blaszak said about six years ago, “A merger of two or more big railroads would increase the combined carrier’s commercial breadth and scope and broaden the services it could offer. The fact that no single U.S.-based railroad reaches every important producing and consuming area of the country puts the industry at a competitive disadvantage to nationwide truckers. Shippers want to deal with as few transportation providers as possible, as long as there is enough competition to keep freight rates in check.”

Success likely requires a merger application that demonstrates hard evidence of a competition benefit that shippers and the public will reap. More stockholder benefits (Editor’s Note: “shareholder value,” the most overused corporate-speak term in the railroad industry today) will not boost the deal in front of a skeptical STB regulatory body. Proving the public benefit is not impossible. It will, however, be challenging. Are the STB commissioners ready with their pro-competitive metric examinations? That is not clear.

Before an application shows up at the STB offices, it’s probably timely now for regulators to consider the consequences of a continuing diminished railroad freight role. One competition test is the realization that at some lower traffic mass, the railroads might become inconsequential, save for a few strategic lanes. Have regulators considered this outcome? Why wait? Why not research the possible outcomes now, ahead of the game? After all, mergers are clearly in the DNA of American railroading. The theory is that an STB application will show up at some point.

The suggestion is to lead the process now by taking a deep look into the STB’s railway waybill sample records. What does that database STB already possesess tell them if they look closely at the unfiltered origin and destination patterns? The question of rail freight relevance mode competition shifts is within their intellectual grasp.

Here is the good news. A near-term-announced Class I merger scenario isn’t required, because the railroads are financially weak. Their limited-access steel rail network coverage is lacking against the always/present everywhere asphalt and concrete truck ways.

When (and if) a railroad merger announcement is made, the biggest factor during the review process is likely to be fear. There will be both an internal corporate fear factor and a public policy fear factor. The largest corporate fear factor would be becoming the last rail network carrier possibly without a partner. Shippers and public fears will focus on becoming a possible single-carrier-served (“captive shipper”) location, or a location with inferior post-merger routes.

What will the rail network end game look like? Here’s one two-transcontinental, hypothetical service-competitive outcome to consider:

Railroad history suggests a “maverick” will make the first move. An unexpected company, perhaps not even a rail sector “insider.” As a teaser, think of Ferromex Grupo México Transportes. Or perhaps someone that brings the larger logistics perspective like Berkshire Hathaway’s BNSF. Or someone who sees railroads as a “real estate” or private tollway/industrial park commerce play.

Here is a simplified strengths and weakness checklist:

For additional insight: There May Be No New “Normal”