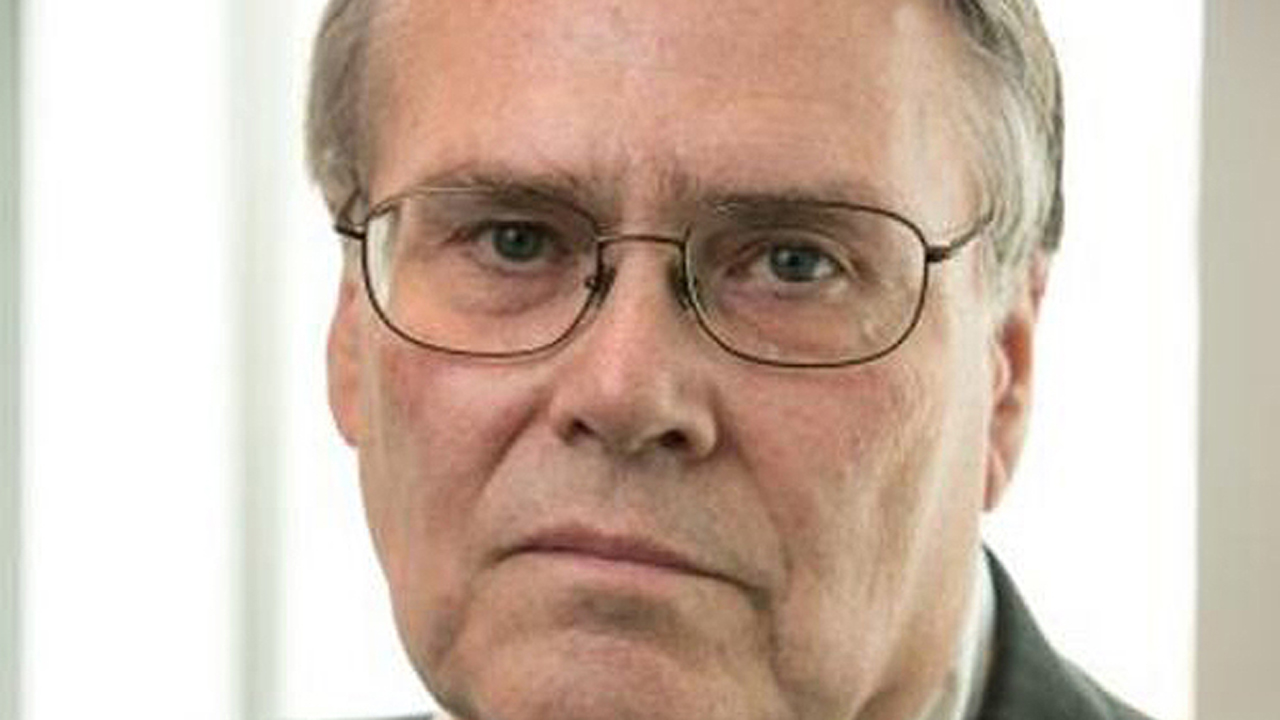 No doubt, AAR Senior Vice President Policy and Economics John T. Gray is trying to sort this all out. I don’t blame him for not smiling!

We traditionally have reported the Association of American Railroads weekly compilation of freight traffic statistics as “straight news,” with commentary restricted to what the AAR may include in the release, which is rare. In this case, there’s a lot going on here, enough to warrant some analysis. The figures are all here, along with supporting charts. But don’t take them at face value.

As our late Financial Editor Tony Kruglinski was fond of saying, “What’s going on here?” Well … (Tony was also fond of ellipses) compared to 2018, North American rail freight traffic has been literally all over the place during this year’s first quarter, based on figures the AAR released on April 3:

Now, let’s look at everything separately. I’ve tried to organize the numbers logically

North American rail volume for the week ending March 30, 2019, on 12 reporting U.S., Canadian and Mexican railroads, totaled 348,723 carloads, down 5.2% compared with the same week last year, and 358,001 intermodal units, up an encouraging 1.5%. Total combined weekly rail traffic in North America was 706,724 carloads and intermodal units, down 1.9%—not good, but not terrible. 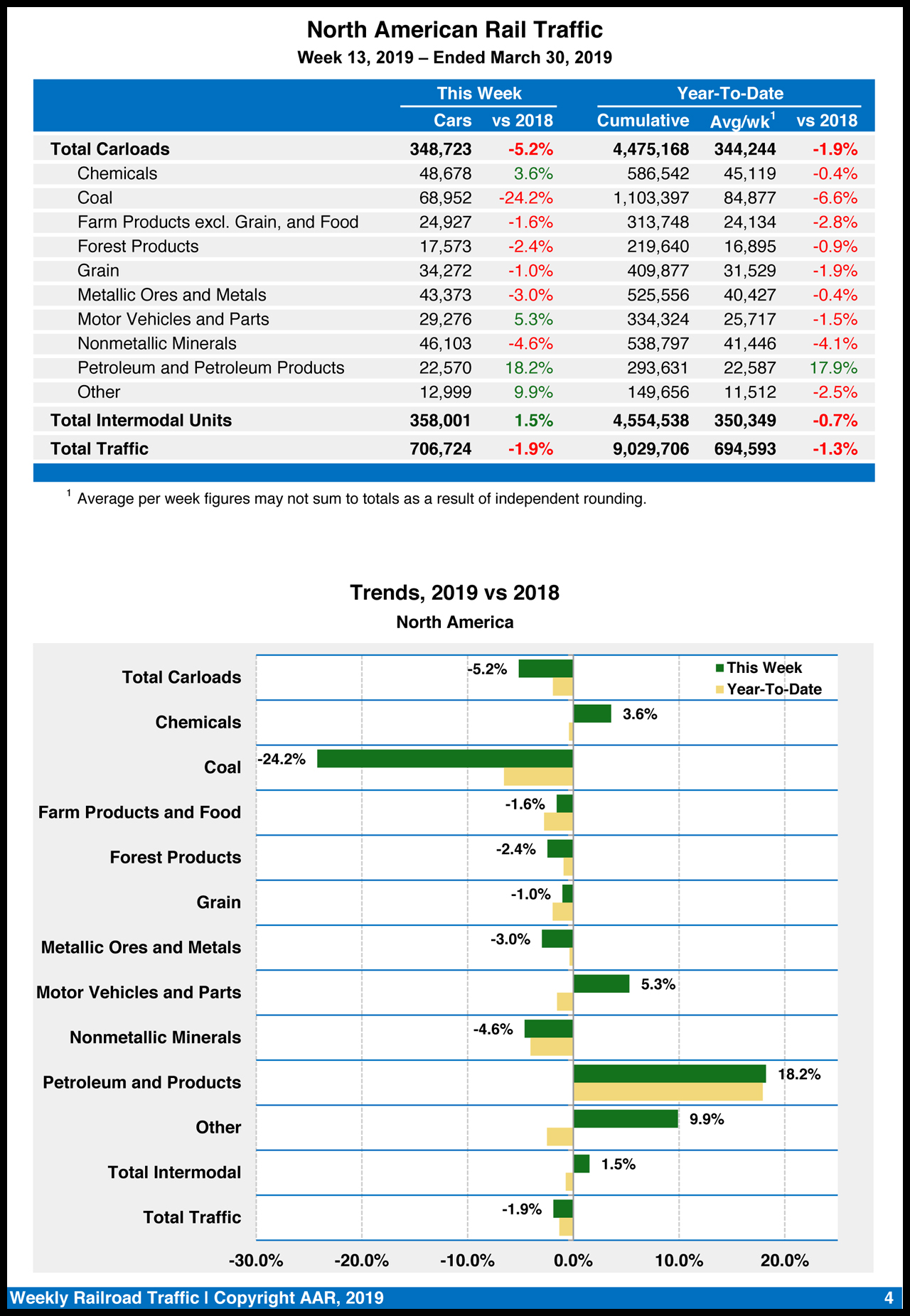 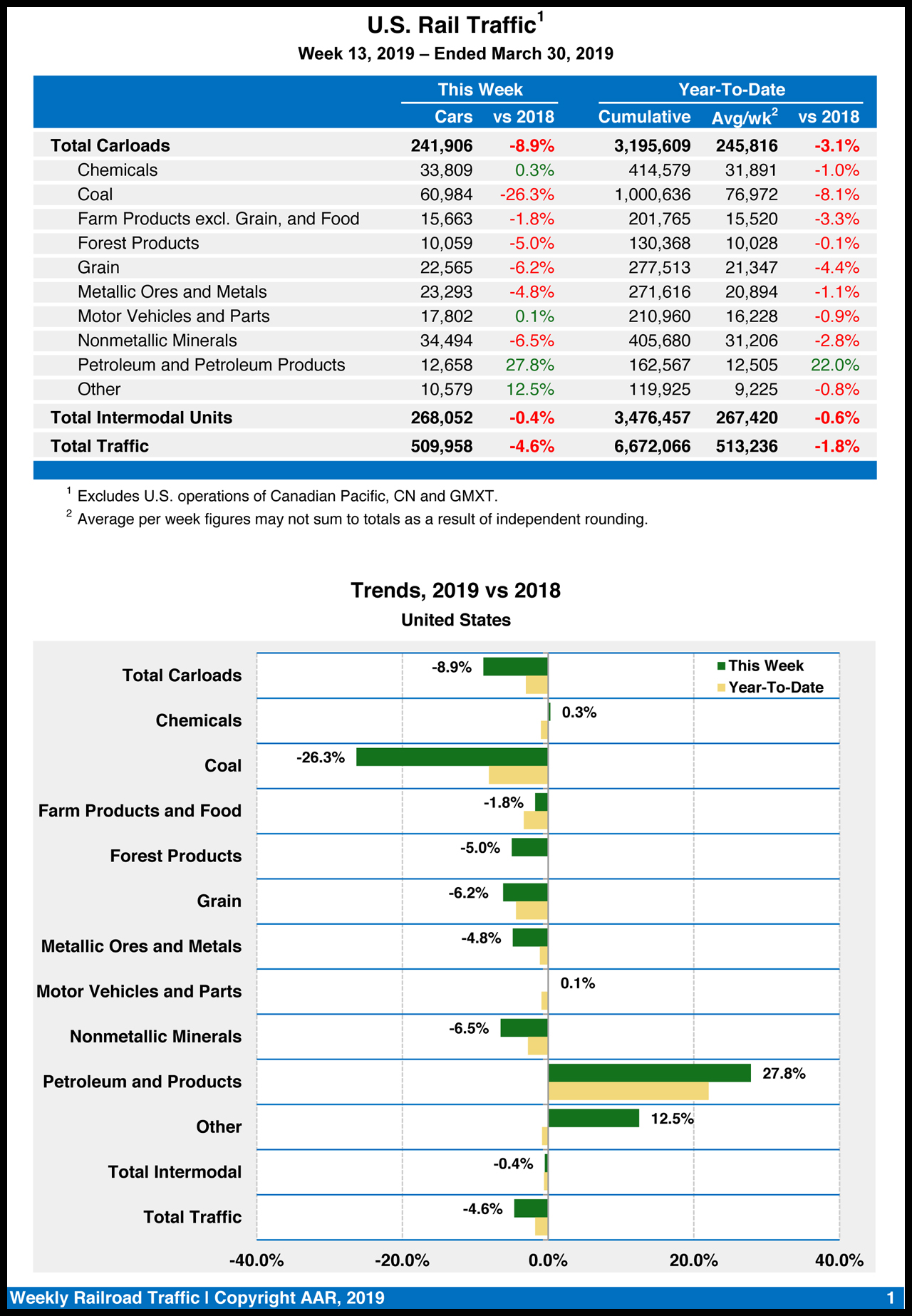 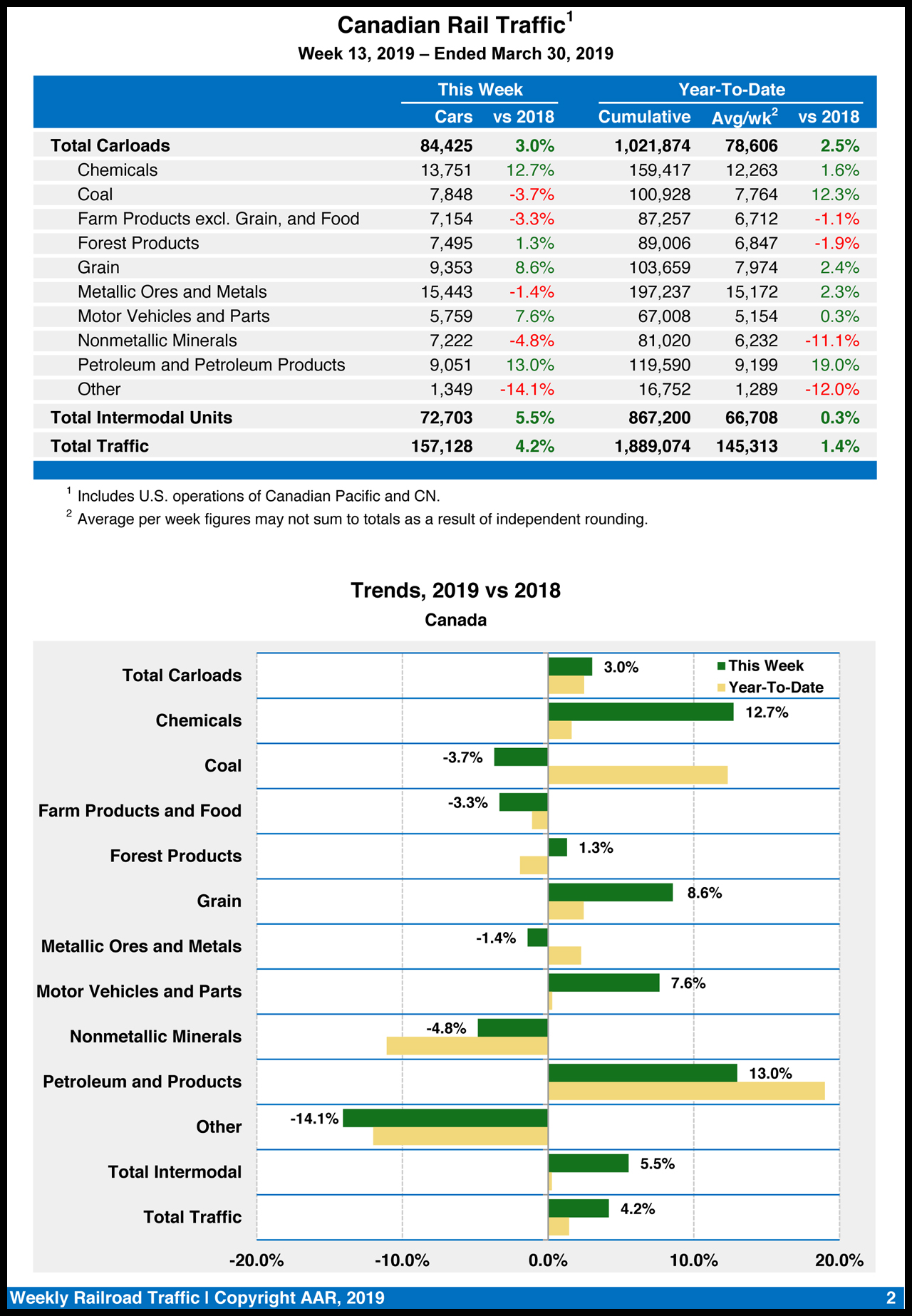 Mexican railroads reported 22,392 carloads for the week, up a very healthy 10.5% compared with the same week last year, and 17,246 intermodal units, an impressive 19.3% gain. “Therein lies the rub,” as Contributing Editor Roy Blanchard is fond of saying: Much of this traffic is cross-border, interchanged with BNSF, Union Pacific and Kansas City Southern. President Trump’s threat to shut down the U.S. border would, as we all should know, halt rail and truck traffic and seriously impact U.S. jobs, not to mention Mexican jobs, particularly in the automotive industry. Trump’s threat is, thankfully, just that—a threat‚ and it almost certainly will go nowhere. Congress most certainly realizes this, as evidenced by Senate Majority Leader Mitch McConnell (R-Ky., and husband of Transportation Secretary Elaine Chao, whose agency oversees railroads, etc.): “Closing down the border would have a potentially catastrophic economic impact on our country, and I would hope we would not be doing that sort of thing.” McConnell said this in response to Trump’s pronouncement to reporters in the Oval Office: “If we don’t make a deal with Congress, the border’s going to be closed, 100% … Security is more important to me than trade.” 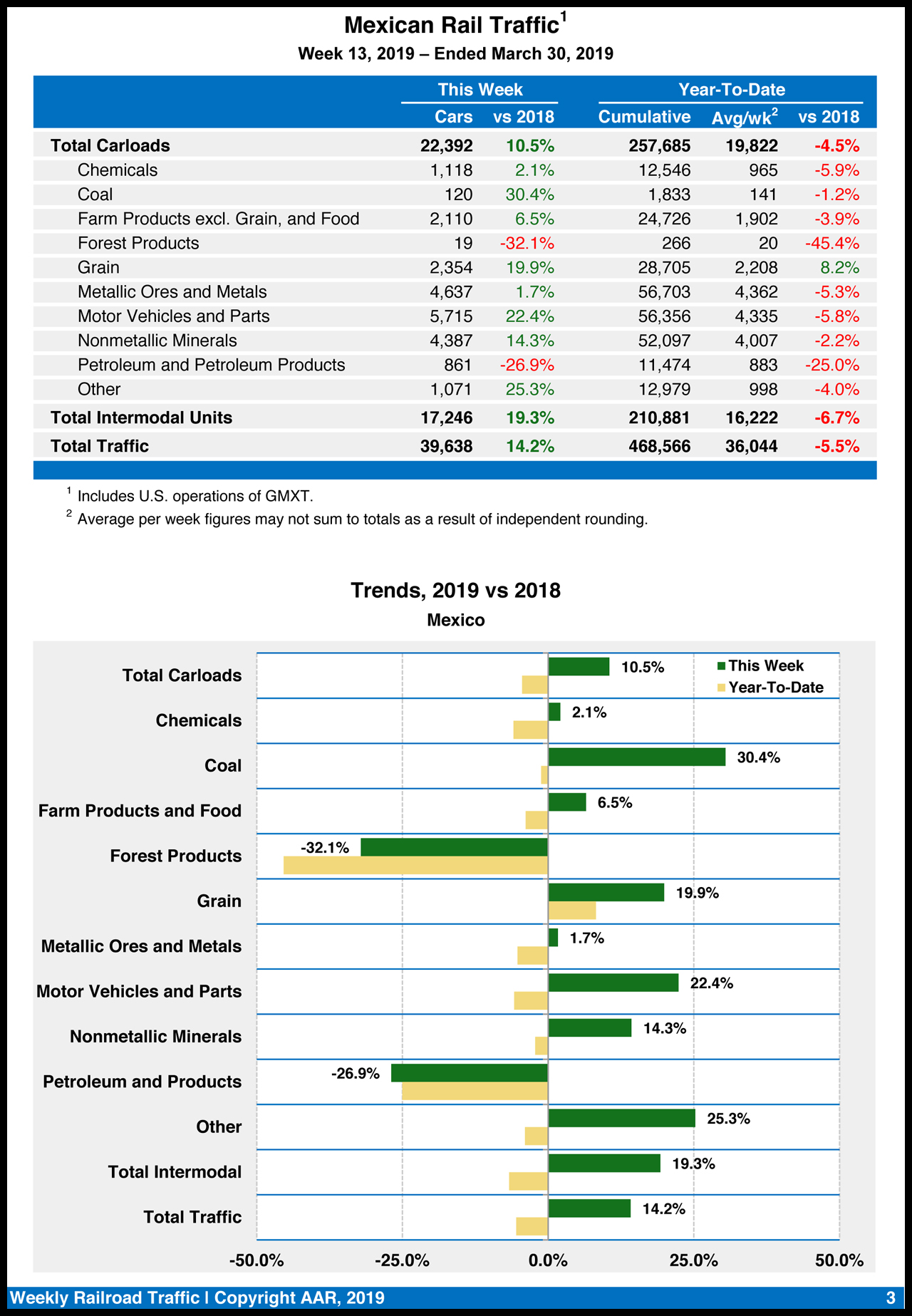 The AAR took special pains to back coal and grain out of its U.S. monthly calculation. Excluding coal, carloads were down 28,812 carloads, or 4.1%. Excluding coal and grain, carloads were down 16,975 carloads, or 2.8%. Bear in mind that coal and grain are important bulk commodities for railroads. But more important, grain (ag products in general) will always be there, and railroads are the best way to move it. Coal? It’s generally acknowledged that coal has a limited long-term lifespan and will at some point disappear altogether. That’s good for the environment but not good for the railroads, unless they are able to grow other business lines and take more volume away from trucks. People have to eat, but there’s more than one way to generate electricity (natural gas, solar, hydro, wind).

The gyrating traffic figures have left many economists and industry observers scratching their heads. I’ll leave it up to the experts to decipher what’s going on. You know how to reach me. Just let me know if you’re on or off the record. I’ll publish the results in a future column.

On to the second quarter. Hope springs eternal!

“As long as the roots are not severed, all is well. And all will be well in the garden. In the garden, growth has it seasons. First comes spring and summer, but then we have fall and winter. And then we get spring and summer again. Yes! There will be growth in the spring!” — Chauncey Gardner (Peter Sellers), “Being There” 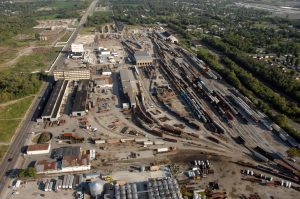