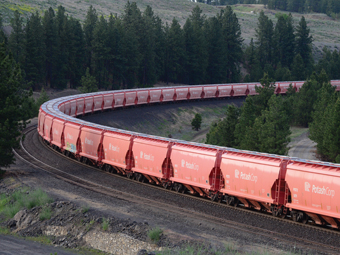 One of railroading’s least-recognized commodities found itself in the global spotlight this summer. On July 30, Russian potash producer Uralkali announced it was severing ties to the Belarusian Potash Company, a joint marketing venture with rival producer Belaruskali. Uralkali’s exit was in response to Belaruskali making independent sales of potash to China.

Uralkali said it plans to increase production and pursue greater market share on its own, which some fear could drive potash prices down to $300 per metric ton. (Recent prices had been hovering around $350-500 pmt, down from a peak of almost $900 pmt in 2009.) Together, the BPC partnership had represented roughly one-third of global potash production. BPC’s break-up triggered a sharp decline in stocks of potash-related companies. As of mid-August, prices for potash itself remained relatively unchanged, though some analysts and customers were calling for substantial discounts.

Potash is a source of potassium used in fertilizer. It is mined primarily in central Canada, Russia, Belarus, and Germany, and is shipped to China, India, Latin America, and other countries where food crops are vital to rapidly growing populations. The U.S., with only 1% of global potash reserves, is a major importer.

The world’s biggest potash shipper by market share is Canpotex, which is owned jointly by Agrium, Mosaic, and Potash Corp of Saskatchewan. Canpotex performs marketing and logistics for the three companies in their export of Canadian potash. One week after the BPC breakup, the Canadian partners expressed ongoing support for Canpotex. Potash Corp. CEO Bill Doyle, in an August 7 webcast with investors, said, “If you look at the markets that we talked about, Uralkali is not going to determine what the price is in the U.S. They are not in a position to do that.” Agrium announced it was continuing with the $1.7 billion expansion (now 40% complete) of its potash facility at Vanscoy, Sask., which will increase production by up to 3.2 million metric tons by late 2014.

Seasonal consumption of potash fluctuates depending on price, weather, and crop conditions. A December 2011 report in The Fiscal Times claimed that “fertilizer is a better buy than gold,” pointing out that potash is not traded in futures markets and that investors instead buy indirectly through stocks of the producing companies. The previous year, in 2010, exports of Canadian potash through Portland, Ore., had increased almost two-fold compared with 2009. Canpotex exports as a whole earned $4.5 billion in revenue in 2011, a $1.3 billion increase over 2010. High expectations in 2011 were tempered by depressed starts in 2012 and 2013.

Australia’s BHP Billiton made an unsolicited bid in 2010 to acquire Potash Corp. The Canadian government blocked the takeover, leaving BHP to focus instead on exploration and development of its potash holdings in Saskatchewan. One of those projects, BHP’s proposed $15 billion Jansen potash mine, was already in question before the Russia/Belarus breakup. BHP had announced in June 2013 that it planned to cut capital expenditures, and its new CEO, Andrew Mackenzie, declared that potash “is a great option, but it’s just an option,” when he spoke at a mining industry dinner in London. In the days following the BPC breakup, BHP said excavation and feasibility studies at Jansen will continue, but actual production there might not start until 2020.

German potash producer K+S, meanwhile, remains optimistic about the potash mine it plans to open near Moose Jaw, Sask. K+S signed an exclusive, long-term agreement in July with Canadian Pacific for transport of potash to West Coast ports, as well as to customers in Canada and the U.S. The K+S mine is scheduled to open in 2016.

North American railroads, which haul more than one-third of the world’s potash to port, aren’t sure when, or if, they will feel the ripple effects from Russia. Canadian Pacific, CN, and Union Pacific have invested in track and other capacity improvements to help move more potash to Pacific Rim export. CP and CN have also increased train length and adjusted the placement of distributed power in order to maximize tonnage per trip. Some of the potash handled by CP gets interchanged to UP for delivery to a Canpotex terminal outside Portland, Oregon.

The ports themselves—mainly Vancouver, B.C., and Rivergate (Portland), Ore.,—have also increased capacity for potash, and a new export terminal is being considered for Prince Rupert, B.C., and Vancouver, Wash. Further inland, Canpotex announced in June the completion of a new $60 million railcar maintenance facility in Usborne, Sask., (initial operations began there in late 2012). Canpotex said, “This facility provides all-weather inspection and light repair, automated railcar wash, and wheel maintenance services” for their fleet of 5,000 hoppers, which were purpose-built for potash service by National Steel Car Ltd.

The apparent slump in potash traffic on CP and CN during the weeks before, and after, the BPC break-up was actually normal for summer. Patrick Waldron, Manager, Public Affairs for CN-U.S. told Railway Age in August, “Potash is at a seasonal low, with domestic volume picking up in the fall.” BNSF moves potash out of Colorado and New Mexico for domestic and foreign markets. Amy Casas, Director of Corporate Communications for BNSF, says, “Although the recent BPC dissolution has created uncertainty in the marketplace regarding future commodity pricing, the demand for potash in North America remains strong, and BNSF anticipates that rail shipments will continue. Indications from the market point toward increased purchasing activity if prices remain depressed or decline further.”