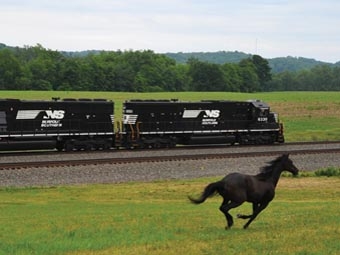 Said NS, “For the first time, Norfolk Southern was named to the CDP’s 2014 S&P 500 Climate Disclosure Leadership Index. CDP cited the depth and quality of climate-change data the railroad disclosed to investors and to the marketplace through CDP, the world’s only global environmental disclosure system.”

The distinction is significant as questions about individual and corporate “carbon footprints” continue to weigh on the U.S. political scene, with railroads coming under increasing fire by some for purportedly appearing indifferent to such issues. In effect challenging such assumptions, NS noted its carbon disclosure score was 98, based on a scale of 100, “the company’s best-ever score in seven years of participating in the voluntary CDP survey and a 9% improvement over its 2013 score.”

“We choose to disclose the railroad’s carbon performance through CDP to be transparent and accountable to investors, customers, and communities in how we manage and attempt to mitigate environmental impacts of our operations. We are working hard to get even better,” Wimbush said.

Companies had to score at least 97 to make the leadership index. Norfolk Southern scored in the top 10% of Standard & Poor 500 Index companies that disclosed information about their greenhouse gas emissions and climate-related risks and opportunities. CDP disclosure scores are provided to investors and other decision makers through various channels, including Bloomberg terminals, to help them assess corporate preparedness for changing market demands and emissions regulations.

In addition to disclosure scores, the CDP awards performance grades to measure a company’s efforts to mitigate and reduce its carbon footprint, NS said. norfolk Southern’s 2014 performance grade is B, based on a scale of A to E, matching its 2013 grade, the Class I railroad added.

Norfolk Southern said that in its 2014 CDP disclosure, it describes strategic investments in technologies, operations programs, and network improvements aimed at reducing the railroad’s carbon footprint while expanding freight capacity and providing fuel- and cost-efficient customer service. The company also reports it has achieved nearly 79% of a five-year goal to reduce greenhouse gas emissions intensity by 10% per revenue ton-mile, with one year remaining.

London, England-based CDP, formerly the Carbon Disclousre Project, says it “is an international, not-for-profit organization providing the only global system for companies and cities to measure, disclose, manage and share vital environmental information.”