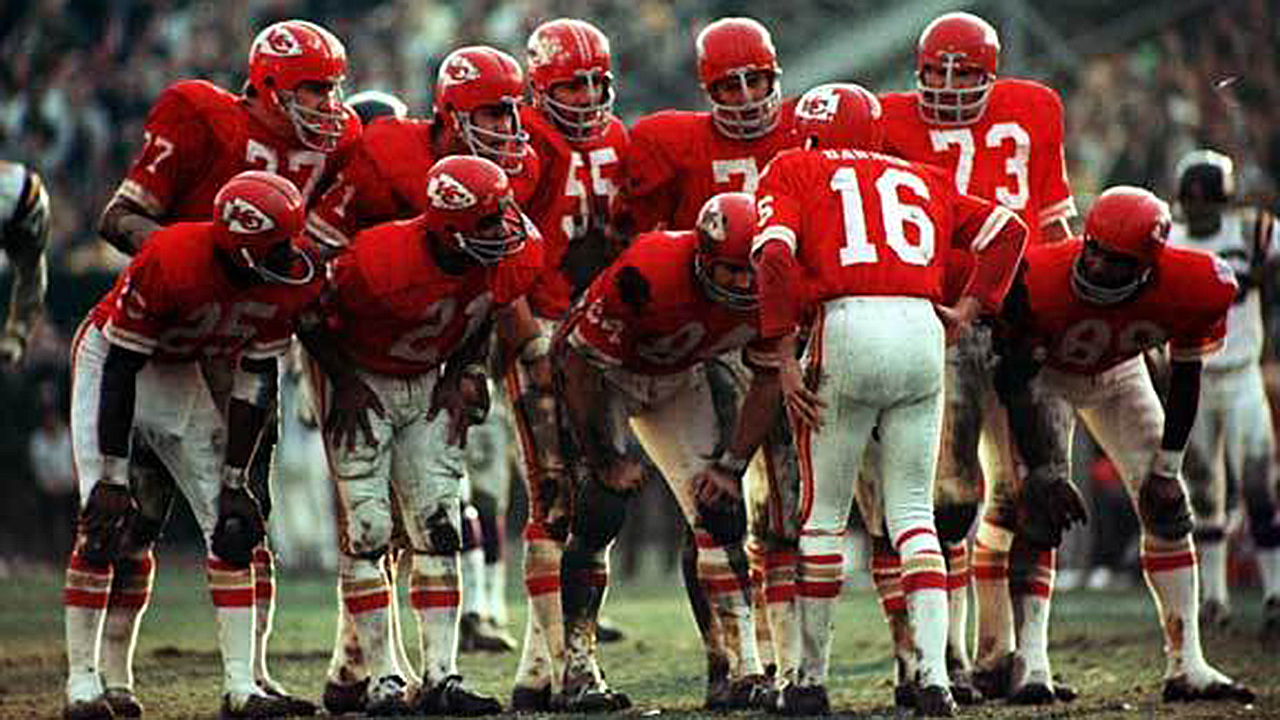 1969: Kansas City Chiefs quarterback Len Dawson huddles with his offense during the Chiefs’ 23-7 win over the Minnesota Vikings in Super Bowl IV. The Chiefs dominated the Vikings, who were a 13-point favorite. Photo courtesy Missouri Sports Hall of Fame.

Yet another potentially game-changing moment for Kansas City Southern in the railroad version of the Super Bowl—the merger tug-of-war between rival Canadian teams, taking place on the Surface Transportation Board playing field before head official Marty Oberman, this one not entirely unexpected: The KCS board has called a timeout (postponed) the Aug. 19 shareholder vote on accepting or rejecting CN’s power-play* offer until the STB rules on the CN/KCS voting trust. Will Canadian Pacific pull off a hat trick?*

While, as expected, “reaffirm[ing] its recommendation to shareholders to vote in favor of the pro-competitive, end-to-end merger with CN,” the KCS board said that since the joint voting trust application is currently under review by the STB, and since the STB announced Aug. 10 that it expects to issue a decision on the use of the CN voting trust no later than Aug. 31, it has determined, “with CN’s concurrence,” that if the STB has not released a public decision by 7:00 p.m. EDT on Aug. 17, the Aug. 19 Special Meeting will be adjourned “to give all shareholders and the board time to receive and consider the STB decision. If the meeting is adjourned, the board will announce the date on which it will reconvene the meeting.”

Also as expected, the KCS board said that, “following a careful and thorough review in consultation with outside financial and legal advisors, [it] has unanimously determined that the unsolicited proposal received from Canadian Pacific on Aug. 10 to acquire KCS in a cash and stock transaction does not constitute a ‘Company Superior Proposal’ and could not reasonably be expected to lead to a ‘Company Superior Proposal,’ as defined in KCS’s previously announced definitive merger agreement with CN.”

A source who spoke “on background for no attribution” called CP’s extension of an increased offer to KCS a “strategic move” that “proved successful,” resulting in the KCS board deciding to postpone its shareholders’ vote, adding that the KCS board’s “ultimate recommendation to its shareholders will depend on the STB ruling on the CN voting trust.”

Proxy advisor Institutional Shareholder Services Inc. (ISS) recommended that KCS stockholders “ABSTAIN” from voting to approve the CN-KCS merger proposal “to ensure that shareholders are able to make a fully-informed decision” on the CN merger proposal and “are able to fully understand any potential CN voting trust decision from the STB.”

CP, as expected, said that “the revised ISS recommendation validates CP’s long-standing belief that KCS stockholders should have all relevant information, including the STB decision on the CN voting trust, to be able to make an informed decision, avoid being locked into the CN-KCS deal and preserve the ability to consider a better alternative proposal. CP has filed a proxy statement asking stockholders to vote ‘AGAINST’ the proposed CN-KCS combination at the Aug. 19 KCS stockholders meeting so that KCS stockholders are not locked into the CN-KCS deal and unable to consider other, better, options. That includes CP’s revised superior offer submitted to KCS on Aug. 10, which we stand by. A vote to ‘ABSTAIN’ and vote ‘AGAINST’ are essentially the same since they both withhold approval of the CN merger proposal.”

Glass Lewis said that “KCS shareholder interests would be best served by withholding approval of the CN transaction and instead voting to adjourn the special meeting. In our view, there is little, if any, reason for KCS shareholders to cast a binding vote on the CN transaction at this juncture, in the face of significant and unnecessary uncertainty that could potentially have substantial ramifications for KCS shareholders going forward, especially when much of the uncertainty should be cleared up in the coming days.”

Glass Lewis said that the “difference between the two offers has narrowed” and that “some investors may consider the CP offer currently has materially greater certainty with respect to regulatory approval, and they may reasonably be of the view that the probability/risk-adjusted values of the CN transaction and current CP proposal are effectively equal at this juncture … CN and KCS have to date not obtained such approval for the voting trust, now nearly 12 weeks after the announcement of the CN-KCS merger agreement. Meanwhile, CP obtained voting trust approval from the STB for the now-terminated CP-KCS transaction on May 6, 2021, less than seven weeks after the announcement of the original CP-KCS agreement … [We are] more inclined to believe the position articulated by CP regarding the likelihood of STB approval of the CN transaction better reflects the facts and available evidence known at this time than does the seemingly overly confident view espoused by CN and KCS in support of their deal.”

Editor’s Note: Yes, I know, power plays and hat tricks are usually associated with hockey, not football. But in this case, drawing parallels with Canada’s favorite pastime is rather fitting, eh? – William C. Vantuono