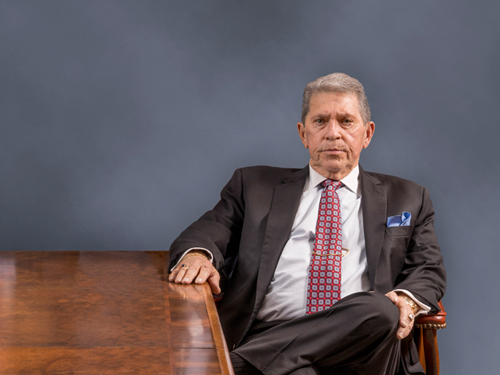 COVER STORY, RAILWAY AGE, OCTOBER 2017: After “a very ragged 90 days,” CSX seems to be settling down as its CEO gives his Precision Scheduled Railroading one more go.

CSX President and CEO Ewing Hunter Harrison’s Precision Scheduled Railroading can be compared to legendary bandleader-pianist-composer-arranger Stan Kenton’s Progressive Jazz: If you’re not anticipating it, you might get run over. The Kenton Orchestra’s “wall of sound”—frequently loud, dissonant, polytonal, bombastic—evoked extreme reactions, back in the late 1940s and early 1950s. You either loved it or hated it. There was no middle ground. Kenton, a brilliant, complex jazz innovator, passionately believed in what he was doing—critics be damned. And most of the musicians and arrangers who worked with him over the years were fiercely loyal.

Hunter Harrison, arguably among this industry’s most heralded operating officers, and this publication’s two-time Railroader of the Year, has evoked similar feelings. He tells you exactly what he wants done and how it’s going to be done.

“Some people would describe you as a ‘tough guy,’” this writer told him during his 2015 Railroader of the Year interview. “I don’t see you that way at all. I see you as someone who is very focused, very determined. You know exactly what you want to do, and you know how to get it done.”

“Well, it’s kind of a matter of semantics,” Harrison responded. “Sometimes, you might call it tough. But I think there are times, when you’re trying to lead and motivate people, when they need a kiss on the cheek and a hug, and times when they need a kick in the ass. So people kind of describe that as tough. I think it’s a case where somebody has to do it. And, you know, some of those things are distasteful. Some are not. I don’t know any of us that get pleasure out of doing those things, but they need to be done at times.”

Based on what Harrison accomplished at Illinois Central, CN and Canadian Pacific (coming out of retirement to take over and transform a railroad that had been lagging behind its Class I peers), it’s difficult to argue with his methods, or with his success.

But with CSX—the second railroad where Harrison was installed as CEO largely through the actions of an activist hedge fund—the transition to Precision Scheduled Railroading has not been all that precise. Certainly, it has been tough.

“Yet at CSX, service is melting faster than a frozen Daiquiri in the Florida midday summer sun. While a slippery slope of deteriorating service began well before Harrison’s arrival, his world-renowned ‘Dr. Fixit’ ability was a primary reason for his recruitment. Yet here is Harrison at CSX, suffering a well-publicized siege from customers, the Surface Transportation Board, employee labor unions, and even some once-fawning investors. Harrison’s anticipated glory days running CSX are mutating into volleys and thunder of cannon firing from all sides.”

“I think Hunter has made some missteps, but some mistakes are inevitable in a transformational change,” says Chip Kraft, Director, Operations Planning at Transportation Economics & Management Systems, Inc., and a Railway Age contributor. “Perhaps Hunter has a ‘shoot first, ask questions later’ mentality, due to his own self-imposed urgency. I believe this is causing him, at times, to proceed without having really thought through or modeled the consequences—sort of like running experiments in the real world. The key is, if you do make a mistake, reverse it quickly.”

“Perhaps Hunter has some well-deserved self-confidence—may I say ‘ego’—in play,” says Kraft. “Even if he has special insights, as I believe he does, there are still limits to what anyone can solve in their head. There should still be a place for analytics, modeling and engineering expertise to make their contributions. I call this a ‘reasoned approach,’ and I wish Hunter had been willing to make greater use of it. He is in such a hurry to proceed that he is, for example, pulling out locomotives before his scheduling discipline is fully in place, with predictable results. As such, he has placed the cart before the horse. He is such a good operator that he gets away with it some of the time, but no one can get away with it all of the time.”

“Our concerns about service stem primarily from direct channel checks with a number of rail customers as well as our most recent shipper survey, in which shippers expressed some displeasure with CSX’s service, with 24% calling it ‘poor,’” said Cowen and Company Managing Director and Railway Age Wall Street Contributing Editor Jason Seidl in late July. “No other railroad received a ‘poor’ rating from more than 6% of shippers.

“However, we suspect this view of CSX is related to a reduction in the number of offerings rather than the poor quality of service, given the company’s fairly solid productivity metrics. In addition to potentially impacting the company’s ability to get price, the service issues could lead to some market share loss. A key point here is that we believe the percentage of the rail network in the east that is peer- and truck-competitive is materially greater than that north of the U.S. border, where Harrison achieved two of his big successes.”

By early September, the situation seemed to be improving. “Is CSX emerging from what many observers, including customers, say is an operational and service meltdown created by a ‘too much, too soon’ rush to implement Precision Scheduled Railroading on an arguably complex network?” Railway Age asked on Sept. 6. “Hunter Harrison says ‘yes.’”

“CSX has made very good progress in the past 60 days in transitioning its operating model to Precision Scheduled Railroading, and I’m confident that many of the challenges we and our customers have recently faced are behind us,” Harrison said in a statement. “The CSX team of dedicated railroaders has worked tirelessly over the past few months to implement our new operating model and moved as quickly as possible to address customer issues when they arose.”

Let’s set aside, for now, lengthy analysis from experienced observers, and go right to the source: Hunter Harrison himself. Following is a conversation this writer had with him in late September:

RA: How would you characterize CSX at this point?

EHH: The railroad is back to where we were, and probably a little better. At this point, we are ahead of schedule. We had predicted that there would be some bumps, and we wish that we would not have had the problems we experienced, but that’s all behind us now. There will be more changes to make. I see a potential for some resistance to those changes, but I am not anticipating any major problems. Change is change.

EHH: We didn’t forecast correctly, in terms of closing hump yards. Maybe we got a little aggressive with that. But let me tell you where I think we ran into problems. Three key things happened. Number one, the employee cutbacks were not well-received. However, I need to point out that 85% of those cutbacks were from the management and contractor and consultant ranks. The first 1,000 people left before I actually got there. That move was made without consulting with me. Some people couldn’t deal with the changes we were making, and some didn’t want them to occur.

There was an incident where some officers falsified computer records with car movements that actually never took place. They took them off the delay reports. They didn’t want to be criticized. We had to dismiss about nine people because of that incident. They were showing cars moving that actually weren’t moving.

We experienced two bad derailments. The one that took place in Pennsylvania took us out of service six days on that line. Of course, we had to route traffic around that incident. In some circles, this was interpreted as cars being misrouted. It actually wasn’t.

The other derailment, we are reasonably sure, was an act of sabotage. It’s currently under investigation. It took place in the Carolinas. A bulldozer was placed on the tracks and covered with pine saplings. Now, it’s not uncommon to find pine saplings falling on the tracks in this area. But in this case they were hiding a bulldozer. The crew didn’t see the bulldozer until it was too late, and they derailed the train.

We had a very ragged 90 days. But we’ve recovered and are a lot stronger now. We’re operating better, with fewer people. In terms of metrics, business is up moderately.

RA: You’ve been criticized by some shipper groups. You’ve lost some business—some to truckers, some to Norfolk Southern.

EHH: There are people who don’t want to see us do well. The most vocal critics are a shipper coalition that has taken our difficulties and tried to turn them into an opportunity to push their agenda. They never talked to us.

I’ve been visiting with a lot of customers personally, and have had some very good dialogue with them. In the long run, we will all be better off, and I think our customers understand that.

In terms of the customers we lost, if they can get a better deal right now, then by all means they should do it. But they all told us, “We used you for a reason. Your service and price were the best.” I understand that if we have problems, we will be penalized.

Most shippers have said to me, “You didn’t hurt us; you scared us. We were used to something else.” Some of the stories out there have been exaggerated. I’ve been very hands-on through this whole thing. For example, a major paper shipper, who I met with personally, was saying that they were experiencing a 54% fill rate on their cars. I checked the numbers myself. The fill rate was actually 88%.

RA: Is CSX operationally more complex than CN or Canadian Pacific or Illinois Central, which geographically are essentially linear systems? CSX is a complex network. Is it more difficult to implement Precision Scheduled Railroading on a railroad like CSX?

EHH: Yes, CSX is more complex, but that is not an excuse for having worse metrics. You get paid for the service you provide. I believe that complexity offers more opportunity. We’re operating the railroad today with 26,000 fewer cars and 800 fewer locomotives. We’ve gone from 12 hump yards to four. The workforce has been reduced by approximately 3,500. We are consolidating our dispatching into Jacksonville, so we are going from nine dispatch centers to one.

There isn’t so much complexity that you can’t make changes. Yes, it was easier to operate CP and CN, but you are paid relative to your competition.

RA: The STB has gotten involved. There is a hearing scheduled for Oct. 11. What are you anticipating?

EHH: I’m perfectly willing and happy to go and testify before the STB. I have no secrets, and I will be completely transparent. There may be some lobbyists there who are going to be pushing their agenda. And I’m going to say to them, tell me where and when and who and I’ll guarantee they’ll get their problem fixed. I can’t deal with anonymity.

STB hearings and vocal shippers notwithstanding, the jury will be out on Hunter Harrison and CSX for a while. We’re going to give it a few months, and revisit the railroad and its determined CEO in the April 2018 issue.