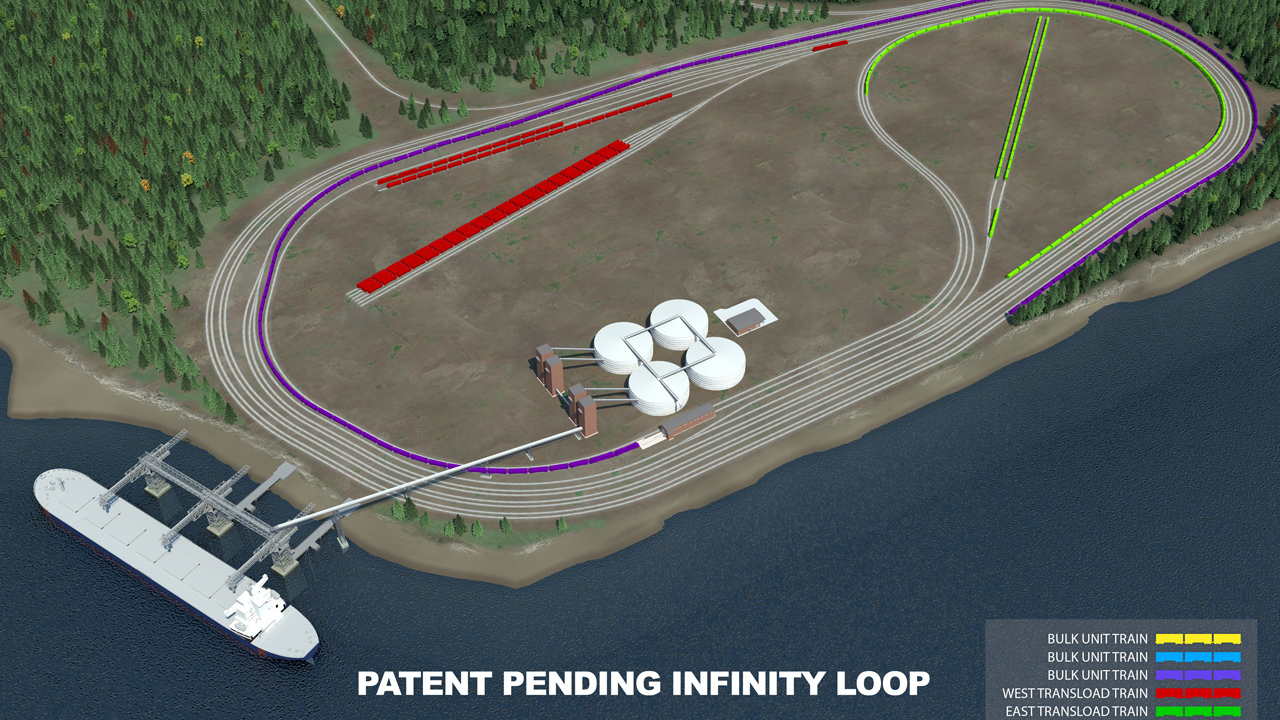 Reichelt and Weber, who are familiar with the operational needs and constraints of railroads and terminals, found the answer. “Our team wrapped a staging yard around a balloon loop track,” says Reichelt. “By wrapping the staging tracks—each capable of holding a unit train—around the balloon, the footprint was minimized and the layout resembled an infinity symbol, inspiring the design name.”

The result? “The combined staging tracks and interior balloon form a design that allows multiple trains to enter their facility without conflicting with other unit trains loading and unloading,” says Reichelt. Additionally, the Infinity Loop minimizes required site property acquisition and enables productive use of space that otherwise goes unused inside of conventional loop track layouts. In fact, the multi-tracked Infinity Loop can accommodate a wide range of shippers within one site, offering trackage for unit trains handling dry bulk or liquid bulk commodities, as well as intermodal trains.

Unlike many unit train facilities, the Infinity Loop allows the same staging yard tracks to be used for staging both arriving trains and trains that have already been processed and are soon to depart. “As we looked at existing unit train facilities, we found that often the staging tracks for either arrivals or departures were very under-utilized, and we realized it would be a big benefit to allow the same tracks to be used for both arrivals and departures,” says Weber. This dual functionality can result in eliminating miles of redundant staging yard trackage, potentially shaving millions of dollars off the construction cost of a unit train facility. The Infinity Loop also allows a train the option of either directly departing the facility after completion of processing, or returning to the staging yard—all with the flexibility of handling bad order cars, make up cars, and air tests, etc., within the facility without interfering with loading/unloading operations or main line traffic.

In addition to unit train capabilities, the Infinity Loop can be configured to have fully independent lead tracks accessing the interior of the loop, where additional loose commodity/manifest industries can be built without conflicting with rail operations through the unit train facility.  HDR was issued a patent pending for the design in late 2018 (U.S. Patent Application for Railway Facility with High Throughput Loop Track; US2018/0257670 A1). The patent application describes other features, such as grade crossings to access the interior lobes of the loop that are not blocked by trains being processed, capability for direct arrival (as well as departure features), multiple balloons and intermodal layouts.

The first Infinity Loop facility is currently under construction in North Vancouver, B.C., where Canadian grain company G3 is building a brand-new Pacific Coast export terminal. Scheduled for completion in 2020, G3 Terminal Vancouver will accommodate three trains of up to 150 cars each. G3 has also opened new grain loading facilities in Alberta and Saskatchewan, with more to be added this year and next. G3 says, “HDR’s Infinity Loop is part of a design that made G3 Terminal Vancouver possible in a harbor area where there’s very little acreage left for physical growth and allows us to complete our power-on, country loop track to port loop track efficiency model.”

Several other Infinity Loops have already been conceptually designed by HDR for facilities throughout North America.