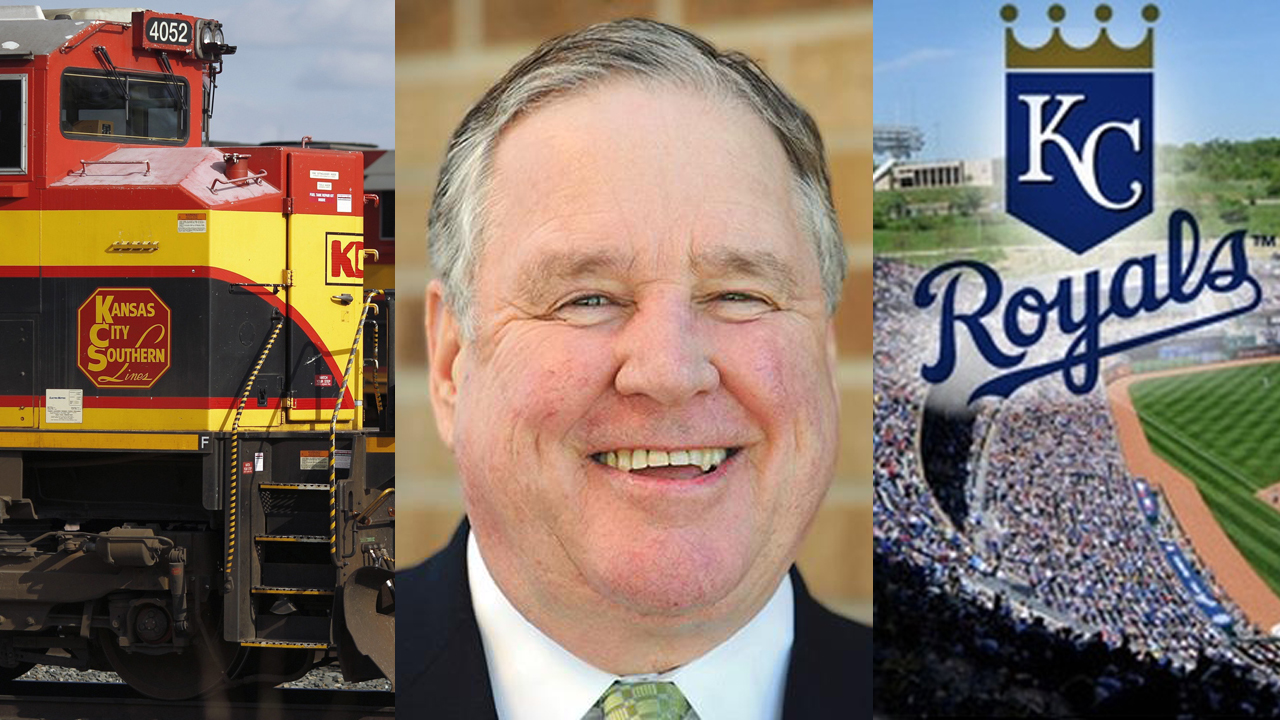 WATCHING WASHINGTON, RAILWAY AGE JANUARY 2020 ISSUE: When Mexico’s President Porfirio Diaz lamented more than a century ago of his nation being “so far from God and so close to the United States,” he hadn’t contemplated the North American Free Trade Agreement (NAFTA), which demonstrably enhances efficiency, encourages innovation, increases consumer purchasing power, makes a wider assortment of goods available and raises standards of living.

While trade-augmenting NAFTA and its progeny, the United States-Mexico-Canada Agreement (USMCA), were negotiated in Mexico City, Ottawa and Washington, D.C., its success throughout North America has much to do with the iron horse and the vision of railroader Michael R. (Mike) Haverty. Significantly, it’s why Haverty, now retired and age 75, was enshrined in the National Railroad Hall of Fame in 2012, and was the 2001 Railway Age “Railroader of the Year.”

With pluck worthy of Alexander the Great, and none of the collywobbles of his peers who watched with barely masked mockery, Haverty, as President of Kansas City Southern Railway (1995-2005), made a $1.6 billion bet on the future of the barely one-year-old NAFTA—and Mexico’s soon-to-be privatized rail system.

Acquired by KCS was the concession to operate the Northeast line of Mexico’s nationalized railroad, FNM (Ferrocarriles Nacionales de México), linking the border crossing at Laredo, Tex., with Mexico City, Monterrey, the Gulf ports of Tampico and Veracruz, and the deep-water Pacific Coast port of Lázaro Cárdenas—the latter port named for a 20th century Mexican president who, during the 1930s, nationalized the very railroads whose 1995 partial privatization allowed for the KCS concession.

The results of that gutsy wager? Since 1996, when the newly privatized and renamed railroad, Transportación Ferroviaria Mexicana (TFM), turned its first wheels, KCS north-south, cross-border traffic has grown from virtually zero to 28% of total KCS carload volume and 33% of total revenue. But there’s more to Haverty’s advancement of free trade, which profoundly depends upon efficient transportation.

Hunt was the founder of J.B. Hunt Transportation, which he grew into America’s largest publicly traded motor carrier. The savvy Hunt was quick to notice on one side of the train an opposite-direction procession of flatcars carrying 100 or more trailers; and, on the other, parades of heavy combination trucks on adjacent highways—each requiring one cab and one driver.

Possessing the shrewdest pencil in the trucking business, Hunt was quick to calculate the corresponding cost of running by highway his trailer freight between the Midwest and California vs. teaming with Santa Fe. One of the most famous handshakes in rail history followed—Haverty and Hunt soon after memorializing the agreement.

“The great majority of Santa Fe intermodal business was then booked by third parties that moved their traffic from one railroad to another in exchange for rate reductions,” Haverty says. “In most cases, we didn’t even know who the primary customer was. Marketing wanted to buy a trucking company; but we had already sold one (Santa Fe Trails Transportation Co. in 1984) that we didn’t know how to run. I wanted to partner with a trucker.” In fact, that was the subject of a paper Haverty wrote while an MBA candidate at the University of Chicago. Thus, the impetus to invite Hunt aboard the Santa Fe business car.

Born in 1989 was the rail industry’s first dedicated premium-service, premium-priced intermodal service—called Quantum. “For the first time, we were charging a higher price for intermodal service to customers other than UPS,” Haverty said. “We signed an exclusive agreement with Hunt so that he wouldn’t play one railroad against the other. A BNSF marketing guy told me last April that he expects revenue from J.B. Hunt intermodal units handled this year to be about $1.5 billion.”

Growing up in a “union, yes” family outfitted Haverty with another skill essential to selling premium service at premium prices, but still constrained by market forces, such as the ready availability of non-union truck drivers. Santa Fe’s costs had to be contained, as Hunt knew to the penny the tipping point between shifting loads back to the highway. Train crew size had to be trimmed from five, and the 100-mile distance dating to 1916 for measuring a day’s straight-time pay had to be increased.

Haverty was not just another management “suit” holding town hall meetings with train crews to discuss economic reality. He was a fourth-generation railroader and former union member—his great-grandfather emigrated from County Galway, Ireland, during the mid-19th century to hire out as a carpenter on Santa Fe; his grandfather and father were in train service on Missouri Pacific (MoPac, now part of Union Pacific); and Mike worked summers—sometimes more—as a MoPac track laborer and trainman to help pay college tuition and support a growing family before entering MoPac’s management training program.

Successful negotiations were contentious, but less so on Santa Fe, which was beset with financial difficulty and in fear of a hostile takeover by an opportunist hedge fund. Recalled were news reports of thousands of lost jobs and the voiding of union contracts in bankruptcy proceedings initiated by takeover artist Frank Lorenzo at Continental Airlines. New industry-wide labor agreements, initiated by Santa Fe, kept railroads competitive, accelerated a shift of traffic from highway to rail, made rail jobs more secure and strengthened the railroads’ ability still to pay wages and benefits higher than in almost all other American industries.

Establishing Santa Fe as a change agent for intermodal innovation, and then acquiring, for KCS, one of the Holy Grails of railroading—the Mexican Northeast concession—ain’t bad at all for a guy who grew up on the blue-collar side of the tracks.

Haverty’s success in Mexico began in 1991, when, as Santa Fe President, he held trade discussions with Mexican business executives. But the courage of Santa Fe board members to invest—especially in Mexico—had been sapped by the 1986 rejection by regulators of a merger with Southern Pacific (SP), and haunting knowledge of financial losses incurred by Southern Pacific de México before its 1951 nationalization by the Mexican government to become Ferrocarril del Pacifico.

Auspiciously, while NAFTA was being negotiated, Haverty was elected KCS President, with permission to pursue what Stilwell had failed to accomplish. By 2005, the KCS minority control of the Mexican railway operating concession Haverty obtained at auction in 1996 grew to 100%, and there occurred right-of-way rehabilitation and a name change to Kansas City Southern de México (KCSM).

With ownership, also, of Texas-Mexican (Tex-Mex) Railway and its International Bridge spanning the Rio Grande River between Laredo, Tex., and Nuevo Laredo, Mexico, KCS forms, through a marketing alliance with CN, a near seamless NAFTA railroad. It stretches from Canada’s Pacific and Atlantic coasts via CN track into the U.S., then south along CN subsidiary Illinois Central (IC), connecting then with KCS, Tex-Mex and KCSM.

A proposed BNSF-CN merger, which could have cut KCS out of the U.S. portion of the marketing alliance, was scuttled in 2000 by a Surface Transportation Board (STB)-imposed merger moratorium pending the writing of less-favorable rail merger rules. BNSF, however, still connects at Laredo with Tex-Mex and KCSM, while both BNSF and UP have numerous alternative cross-border connections with Ferrocarril Mexicano (Ferromex), in which UP has a minority interest. But it’s not the NAFTA railroad of which KCS is a part.

That efficient KCS-CN marketing alliance fuels future merger speculation, but no formal Class I merger application has been made to the STB since imposition of those tougher merger standards two decades ago. Notably, however, the tougher standards specifically exempted—as sought by Haverty—only KCS, the smallest of Class I railroads, meaning an easier evidentiary standard in a KCS merger with another Class I.

Now retired, with energies redirected to a recently obtained minority ownership of the Kansas City Royals baseball team, Haverty is but an observer. Yet whatever the future, the causation will be coupled to the Haverty factor—his enduring pioneering foresight in achieving for all railroads unprecedented traffic growth through more efficient intermodal operations, and forging for KCS the long-elusive link to attain more commercial fruits offered by NAFTA.