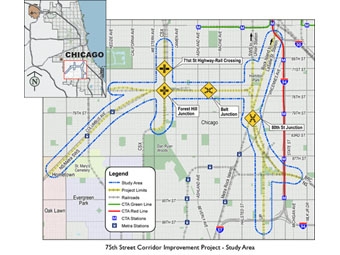 The 75th Street CIP is the largest project in the CREATE Program. Six major railroads—two passenger (Amtrak and Metra) and four freight (Norfolk Southern, CSX, Union Pacific, Belt Railway of Chicago)—pass through the Chicago neighborhoods of Ashburn, Englewood, Auburn Gresham, and West Chatham. These railroads cross each other and local roads at several points within the area. These crossings result in train and road traffic backups and delays. The 75th Street CIP was initiated to find solutions that will relieve this train and road traffic congestion. The Project Team includes FHWA, Illinois Department of Transportation (IDOT), Chicago Department of Transportation (CDOT), and Association of American Railroads (AAR). The project team is conducting a study to determine how the railroad tracks in these neighborhoods can be “untangled” so that trains, vehicles, and pedestrians can more easily move through the community.

The publication of the combined Final EIS and ROD by FHWA represents a major step forward for the 75th Street CIP. The Final EIS contains the detailed analysis completed to understand the possible impacts of the project, the comments received by agencies and the public during the formal review period, as well as the responses to those comments. The ROD summarizes the purpose and needs of the project, the alternatives considered, the factors supporting selection of the preferred alternative, the agency coordination and public involvement efforts completed since the initiation of the EIS process in 2010, as well as the environmental commitments and mitigation measures to be carried into detailed engineering and construction phases of the project.