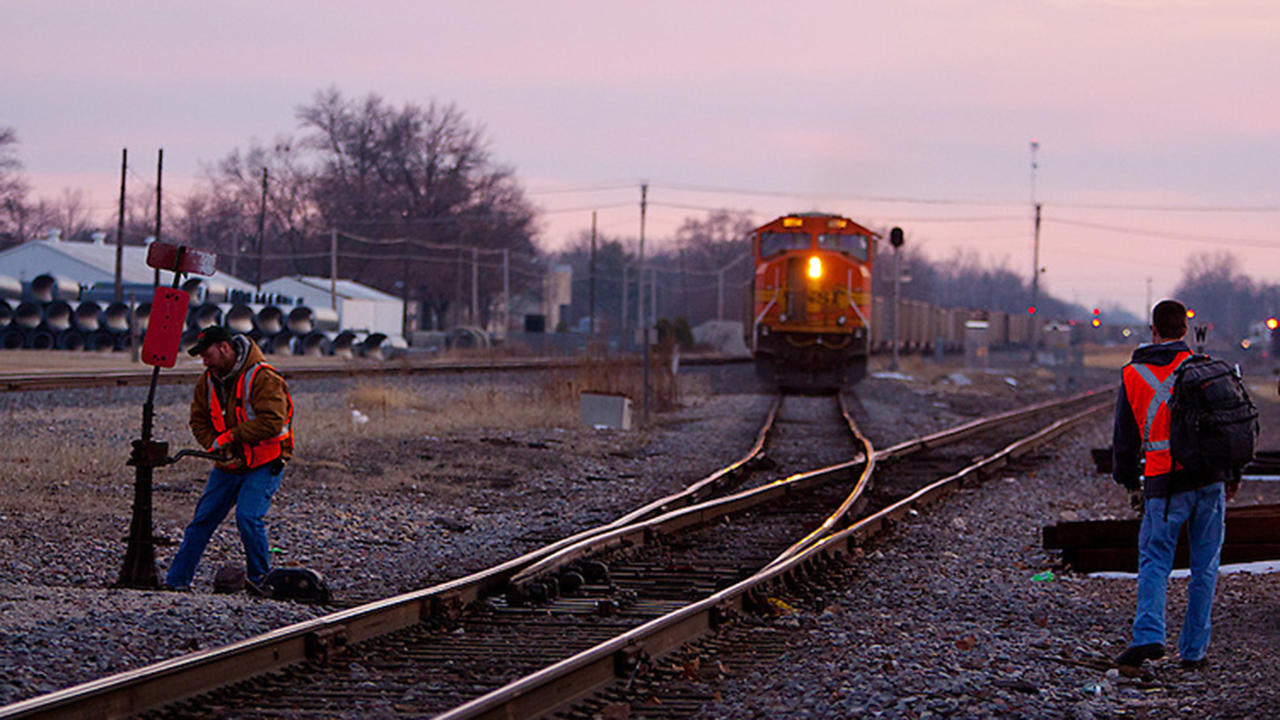 It is more than two years since the rail industry’s 12 labor unions and management (representing most Class I railroads and some smaller ones) commenced bargaining to amend contracts defining wages, benefits and work rules.

Although ratified agreements are retroactive to the Jan. 1, 2020 start of negotiations, labor’s rank-and-file are feeling the pinch of almost 9% price inflation over the past 12 months. Labor negotiators, however, rejected a cash advance to tide members over during the pendency of negotiations and are demanding nothing less than a 47% wage boost over five years. Rail employee compensation, including employer-paid healthcare insurance and retirement plan contributions, already exceeds that of 94% of American workers.

Management, while acknowledging recent price inflation, points to the previous two 12-month periods when price inflation was but 2.6% and 1.5%, with expectations it will again retreat in response to the Federal Reserve Board’s aggressive economy-cooling interest rate hikes. Also affecting the generosity of management’s offer are dramatic reductions in coal traffic and a growing threat to intermodal from advances in self-driving trucks and legislation allowing longer and heavier trucks.

Does the fault for failed contract talks lie with the Railway Labor Act (RLA), the National Mediation Board (NMB), labor negotiators or management? Let’s consider each.

Passed by Congress in 1926 as the first law guaranteeing workers the right to organize, join unions and elect bargaining representatives, the RLA was intended as a manual of peace—that labor and management “jaw, jaw” rather than “war, war.”

Additionally, that rail labor contracts continue in force until periodically amended avoids the “no contract, no work” trap facing negotiators in other industries, and keeps paychecks flowing and trains operating.

If one grades the RLA on its ability to prevent economy-jolting rail work stoppages, it is an unmitigated success. Since World War II, just 12 days have been lost to nationwide rail stoppages, and none the past three decades.

A jolly wonderful reason is the RLA provides for compulsory and open-ended mediation to assure attentive and thorough consideration of issues; and, if necessary, non-binding settlement recommendations by experienced arbitrators serving on Presidential Emergency Boards (PEB). Should work stoppages still occur and Congress chooses to act with back-to-work legislation that determines contract amendments with finality, it has in hand advice from PEBs.

The RLA defines the NMB’s role, whose effectiveness—and that of PEBs—depends on stakeholder and public perceptions of processes and actions being neutral and unbiased.

A 2010 NMB-led conference of stakeholders, studying why positive perceptions were eroding, concluded that while mediation sometimes seemed “virtually endless”—as the Supreme Court observed in 1987—and demoralizing to the rank-and-file, the “variations and distinctions between the multiplicity of bargaining disputes” makes it impractical to establish hard time lines. What makes mediation effective is the NMB’s ability to accelerate or decelerate the process in response to good or bad faith bargaining by the parties.

The NMB earlier this month seemingly abandoned attentive and thorough consideration of issues, truncating to fewer than two months mediation involving 10 of the 12 rail unions representing a multiplicity of crafts and issues. Those unions didn’t seek NMB-guided mediation until January 2022, with the first session not held until mid-March.

Mediation had barely begun when an assigned and highly respected NMB staff mediator was shunted aside by the three-Board members who took charge of mediation. Two weeks later and over remonstrances of management and the Republican member, the NMB’s two Democratic members voted to declare, in record time, a bargaining impasse leading to a now-expected creation of a PEB.

If the NMB’s two Democrats, each with labor union backgrounds, cozied up to rail labor, or were encouraged to do so by the Biden White House, it would be a troubling blemish on the NMB’s cherished image of neutrality, as the NMB is an independent (from the Executive Branch) regulatory agency. Its appropriate communication with the White House should be limited to formal updates on the status of negotiations and the naming of a PEB.

Another most notable recommendation of that 2010 NMB-led conference was that “Board-member involvement [in mediation] be managed in a way to avoid undermining of the authority of the mediator at the bargaining table or creating the perception of ‘deals’ being made by a party going directly to a Board member.”

It is myth that collective bargaining in the rail industry is conducted by labor negotiators concerned only with their members’ self-interest. Often, internal conflicts exist.

Consider the two largest rail unions, which have a history of behaving as scorpions in a bottle. Representing 54% of the 115,000 rail workers affected by this round of bargaining, the two are the Transportation Division of the International Association of Sheet Metal, Air, Rail and Transportation Workers (SMART-TD)—formerly United Transportation Union (UTU), which represents conductors and other ground service workers—and the Brotherhood of Locomotive Engineers and Trainmen (BLET).

On seven occasions in past decades, the two unions failed in attempts to merge into a single union representing train and engine workers. The UTU finally affiliated with a sheet metal workers union, while the BLE affiliated with the Teamsters, added “Trainmen” to its name to become BLET, and commenced poaching conductors from its rival, playing on anticipation of their promotion to engineer.

The BLET also signed an agreement with BNSF acknowledging a future of one-person train crews with a higher-paid engineer. Some BLET senior officers even advocated that where two crew members are required, the second be a BLET represented “assistant engineer” rather than a SMART-TD represented conductor.

As for SMART-TD, its predecessor UTU signed a national agreement embracing, for use in switch yards, job-saving remote-control technology that cost thousands of rival engineer jobs.

The UTU also cajoled UTU-friendly lawmakers to insert, sub rosa, in a non-transportation-related military aid bill, a legislative rider requiring the NMB to classify engineers and conductors as a single craft. The UTU objective was a winner-take-all representation election as the UTU had the greater number of members. The plot unraveled when the engineers’ union’s legislative department discovered the rider’s existence.

Although BLET and SMART-TD now sit side-by-side at the bargaining table with eight smaller unions, the harmony has more to do with mutual distrust and concern as to who might agree to what if they bargained individually.

Then there is internal union tension of preserving dues revenue while simultaneously representing member interests that might be better served through job-reducing agreements providing career-long income protection.

As railroads consolidated, improved productivity and reduced headcounts, rail labor unions—even when merging with larger non-rail labor organizations—retained a top-heavy administrative structure little changed from when they represented two- and three-times as many rail workers. What is best for the union is not always best for the union member, and vice versa.

In 2014, for example, BNSF offered conductors a deal seeming to check every self-interest box—a collaboration by management and a forward-looking SMART-TD general committee of adjustment.

In exchange for allowing BNSF to operate trains on Positive Train Control (PTC) equipped routes—those of legacy railroads Chicago, Burlington & Quincy, Great Northern, Northern Pacific, and St. Louis-San Francisco—conductors would be reassigned to ground service with more predictable hours and contract language memorializing, for the first time, that they are in charge of train operation. (PTC is a $15 billion investment to eliminate human-factor-caused train accidents.) Also included were wage hikes and income protection until retirement.

Top officers of SMART-TD lobbied the 6,000 affected members employed by BNSF to reject the agreement negotiated by their general committee of adjustment, concerned with losing dues revenue when protected conductors retired and were not replaced. Members did reject the offer, with many now expressing second thoughts when discussing how working conditions—by far the most significant complaint of train and engine workers—could have improved.

As major railroads consolidated into two duopolies separated roughly by the Mississippi River, differences defined them. Those in the West operated longer-haul trains with fewer yard operations—consistent with market geography—versus shorter-haul, yard-prolific railroads in the East. One-size-fits-all national agreements with standardized wages and work rules became problematic. During this round of bargaining, for example, CSX broke from national handling to negotiate wages and work rules separately with BLET and SMART-TD.

Conflicts also exist between railroads and their investors, whose priority is short-term profits. Former BNSF CEO Matt Rose was heard to say that because BNSF is not publicly traded—it being 100% owned by conglomerate holding company Berkshire Hathaway (B-H)—BNSF is able to focus more on meeting customer wants than fulfilling Wall Street demands. B-H Chairman Warren Buffett said earlier in June that B-H selects acquisitions based on “long-term business performance and not because we view them as vehicles for timely market moves.”

As for publicly traded railroads, optics are troubling when management seeks to cap employee compensation while buying back billions of dollars in stock to improve share price. An example was offered recently by New York Timeseconomics writer David Leonhardt in a critique of General Electric (GE) and its former CEO Jack Welch.

“For decades after World War II, wrote Leonhardt, “big American companies bent over backward to distribute their profits widely,” with GE “proudly” talking about “how much it was paying its workers.” But under Welch, GE “unleashed a wave of mass layoffs and factory closures that other companies followed. Profits began flowing not back to workers in the form of higher wages, but to big investors in the form of stock buybacks. But in the long run, that approach doomed GE to failure. So, while Welchism can increase profits in the short-term, the long-term consequences are almost always disastrous for workers, investors and the company itself,” wrote Leonhardt.

The NMB has ordered negotiators back to Washington July 12 for a “public interest” session in a final effort to extract concessions leading to a voluntary agreement. Failing that, the NMB will recommend President Biden appoint a PEB. While the NMB provides a list of qualified neutral arbitrators, the White House is under no obligation to name those recommended. Failure to do so would be a red flag—indeed, a bloody shirt of distrust that would only further erode confidence in NMB and PEB neutrality.

Once a PEB is in place, labor and management destinies belong to a third-party, with the 1991 words of former NMB member, and then neutral arbitrator, Robert O. Harris still resonating: When PEBs and Congress are chosen to settle rail labor contract disputes, “welcome to the oldest established craps game in Washington. Like the suckers in Guys and Dolls, you are risking your futures on the roll of the dice.”

Railway Age Capitol Hill Contributing Editor Frank N. Wilner, with undergraduate and graduate degrees in economics and labor relations and with five decades of rail industry experience, including on both sides of the negotiating table, is author of “Understanding the Railway Labor Act,” published by Railway Age sister company Simmons-Boardman Books.