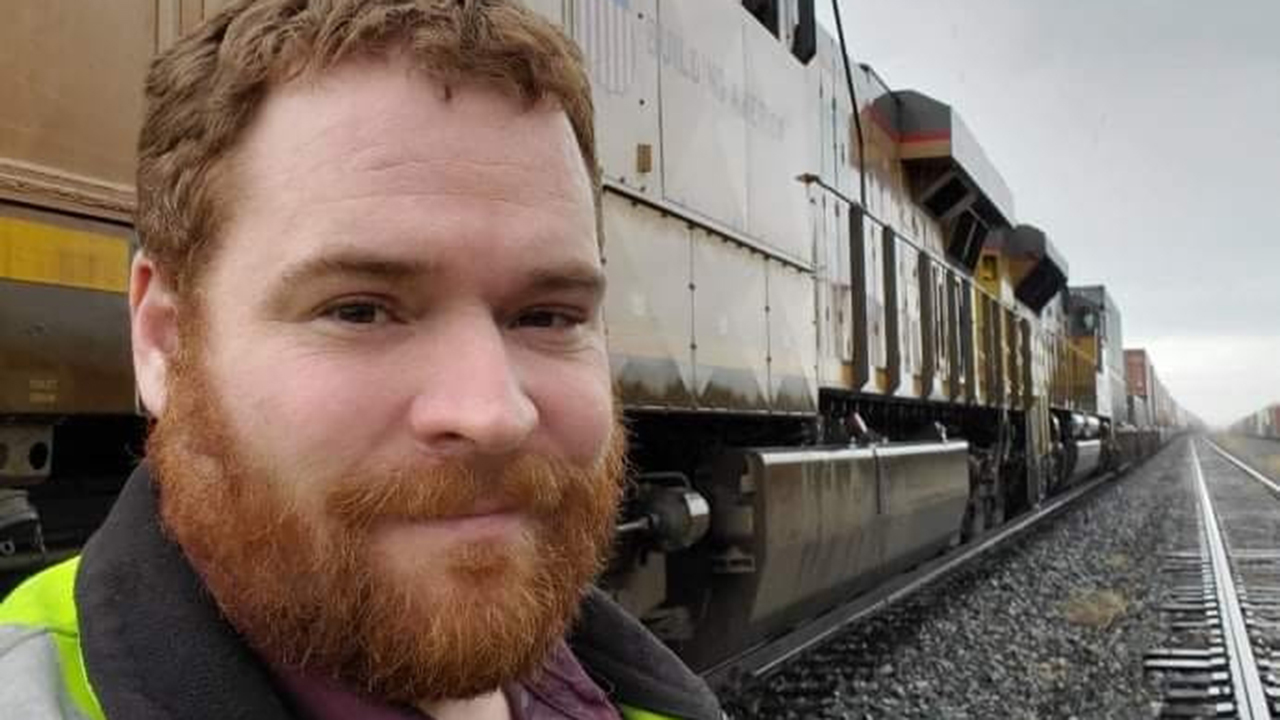 My name is Michael Paul Lindsey II. I am a 17-year employee of Union Pacific in Pocatello, Idaho. I would like to humbly contribute my opinion on the recommendations of Presidential Emergency Board 250, and to also thank you for clarifying a few critical industry stances that employees and regulators will use when they inevitably bring your industry to heel in the upcoming months and years.

Your organizations seem to completely miss several much larger points that I intend to expose. This dispute has never been an issue of simply dollars and cents, or one that can be resolved by a financial bribe to labor in the correct percentage amount.

I could have read the entire PEB 250 report within 24 hours, but I selfishly chose to go to work instead. To encourage my selfish desire to work, my company has even imposed mandatory attendance standards to ensure that I can steal even more money from shareholders. To be logically consistent, this must be the reason for the attendance policy since we don’t actually contribute to the profits of the company. At least that is how I read page 32 of the PEB report, which stated that “investment and risk are the reasons for their profits, not any contributions by labor.”

In a further attempt to justify this blatant insult, your organizations stated further that we are adequately paid and “do not share in the downside risks if the operations are less profitable, and have no claim to share in the upside either.” In an attempt to verify this claim, I have to ask what in the world I was doing when I left my home in California at the request of the railroad. Traffic was slow in 2007 and my seniority was not good. However, the railroad was hurting for employees in Pocatello and enticed me to permanently give up my seniority in Roseville and move to Idaho. When I took this risk, I had never even been to the state of Idaho, let alone the city. When I arrived at the beautiful red brick depot to serve the company, it was also my first view of the place that would become my permanent home. However, making such a leap of faith is not considered adequate risk, according to your statements to the PEB.

If I have no downside risk during less profitable times, what exactly was I doing when I was then furloughed for the better part of two years after the financial crisis of 2008? Apparently, making $7,000 during the entire year of 2009 at the Union Pacific wasn’t sharing in the downside risk enough.

What was I doing when I slept in my truck in railroad terminals in Nevada, Idaho and Utah, or rented a one-bedroom apartment in Grand Junction to work a local while my young wife stayed back at home? These were my downside risks during the most recent financial crisis, and the stories are repeated over and over again across all crafts and all of the railroads in countless states and terminals across the country. Your organizations are “too big to fail,” and we are not? So, I must ask, how much downside risk do you truly think you have? I would say that it is not really as big as you think. Labor has been the one group to make continuous and faithful sacrifices to support your downside risk, and by callously ignoring us, you have lost the loyalty of an entire generation of skilled, experienced workers.

According to an Aug. 17 Railway Age report on PEB 250, your organizations claim that the PEB recommendations are “fair and appropriate,” muddying the water with bold statements of increased percentages and $11,000 in average back pay. It’s basic human psychology for a person to be enticed by such beautiful low-hanging fruit, and I believe that this was the intent of your statement. You intended to play upon flashy words to entice us into a lie—like a carrot on a stick, playing upon our perceived ignorance. However, as I said earlier in my letter to the STB, railroaders are a diverse group with backgrounds in many skilled crafts, businesses and even college degrees. Only the most ignorant among us would believe your laughable statement that “money is money,” when it comes to our contract. We know that there is a huge difference between money that is taxed, and money that is not, and we realize what a raw deal we are being handed with a 100% taxable pay increase and zero increase to our non-taxable meal allowance.

Let us go back to page 28 of the PEB 250 report (downloadable below), in which the board spoke of railroad profits: “Profits were also bolstered by, among other things, tax cuts.” Now, I’ll admit that I do not have a Harvard MBA, so please clarify. Were these profits made by investment or by risk? I’m confused.

Unlike the tax cuts your organizations received, the Tax Cuts & Jobs Act served as a tax increase for your transportation employees because it effectively took away our ability to itemize. Therefore, it took away our ability to write off meal expenses at the end of the year. This costs us thousands of dollars per year, but apparently, that is not considered downside risk either. So, since our ability to write off our meals went away, the IRS allows for a reasonable solution. The IRS states that it allows $60 per day to be paid to employees tax-free as a reimbursement for meals. Yet, as an engineer, I receive $12 to be away from home for two days at a time. This portion of our pay is a real, dollar-for-dollar pay increase, yet it will remain untouched by this PEB, and your organizations consider that to be “fair and appropriate.” This issue could have been addressed years ago by simply taking that portion of our existing pay and distributing it to us as a non-taxable meal allowance. It would have cost the companies nothing, but zero effort has been taken to correct this injustice.

Why is this such a big deal? This isn’t the first time that I have brought up this issue, and I truly believe that it lies at the root of a much larger, much more philosophical question that can and will result in a labor stoppage at the end of the 30-day cooling-off period. The question that we should be asking is why our out-of-town expenses are taxable and yet some railroad executives get to use a company credit card, or at minimum receive a tax-free reimbursement for their expenses, while I make $12 to be forced to eat out for two days. Quit taxing our meals. These deductions are not just for executives, and by continuing this injustice, you make a statement that there are two classes of people: the elite class that is not taxed, and the working class that deserve to pay taxes on all of our pay. The PEB made no recommendations, and your silence on the issue shows us where you really stand.

Of course, we already know where you stand. This sort of blatant disregard for humanity can be seen all around the rail industry. There have been two parades this summer in Pocatello where the people and businesses of the community show their pride and support for the community. Companies big and small were there. Even Wal-Mart had enough corporate tact to have a float in the parade. Yet, the oldest, largest employer in Pocatello, which has had a presence since the 1890s and has touched every local family, did not have any presence—not even a maintenance-of-way truck. It’s not in the budget. We no longer send company representatives to schools to talk about crossing safety, and I don’t even remember the last time we had a summer company picnic. It’s no longer in the budget because humanity does not matter. Money and institutional investors, BlackRock, and the operating ratio are the only thing that matters anymore.

This is why your organizations think that the PEB results are “fair and appropriate.” Money is all that matters to you. Humanity, families and community mean nothing. A fair and appropriate contract would address what matters to us: quality of life. At the end of the day, quality of life was the goal of this contract, not a 24% taxable pay increase that actually lowers our pay by 2% when adjusted for inflation. Your organizations contributed to inflationary policies when they accepted stealth bailouts from the SMCCF program. $25 billion was allocated to healthy companies, and your companies stood there and made no objection. This alone shatters your claim that your investment and risk made your profits.

Your employees are leaving because you don’t own us, and we are the largest stakeholders making a profit for your companies. We don’t invest bailout money and preferential loans given to your companies by the Federal Reserve. We invest our lives, our health and our only life on this world. We invest the childhood of our sons and daughters. We invest the youthful years of our spouses. We invest our years of good health to ensure that your trains move, that customers receive their cars, that your tracks are maintained, that the signal systems function, that locomotives, and rolling stock are safe and operational and that yards and territories are fluid and profitable. If that doesn’t represent a people worthy of reward for their investment, then you truly are lost.

The pay increase of 24% over 5 years is entirely taxable, and after adjusted for inflation represents a 2% loss in actual purchasing power. This also assumes that the inflation numbers are accurate. The carrier organizations encouraged the PEB to use of a PCE method rather than CPI to calculate the inflation rate, assuming that we can just substitute beef for chicken. This hides the true inflation rate. Do rail executives substitute beef with chicken due to cost? Or is substitution merely for the peasant class? Additionally, once one considers the additional pay falling into a higher tax bracket for many, the raise becomes even less remarkable. In 2021 alone, Union Pacific raised its dividend by 20% and increased its share buyback program. Dividends are given preferential tax treatment. This disparity is hardly fair and appropriate.

But, we will take the high road and show some humility. We now know and understand that by going to work, we are simply being selfish since we do not actually make the shareholders any money for our time and sacrifice. That is why at the expiration of the 30-day cooling off period, we are going to go ahead and stop stealing from you. We will stop the engine of the world … at least for a few days until Congress decides to legislate our alleged predation upon your industry.

But there is good news. If Congress goes ahead and imposes the results of the PEB upon us with zero quality of life improvements, rest assured that many thousands of our ranks will accept your back pay and then leave you to focus on your risk and investment profits. There seems to be nothing more quintessentially American than involuntary servitude, and therefore Congress thinks that it can impose it by legislative decree. But let me warn them that we are not indentured servants. We are not tied to the land or your railroad or your neo-feudal lords. The industry and regulators still seem to be tone-deaf to the fact that the game has changed. We can and will walk away permanently if our upcoming strike is not respected as the free market solution that it is.

Just think of it as an Embargo. Union Pacific should know all about embargoes, considering how often they embargo poor shippers for violating arbitrary standards. We are exercising our free market, capitalist right to embargo you. If you don’t like it, fire us, and go make your risk and investment profits.