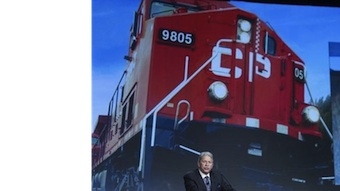 Canadian Pacific has approached CSX about a merger, and CSX has rejected the proposal, according to reports in The Wall Street Journal, New York Times, Toronto’s Globe & Mail, and other major media outlets. The reports attributed unnamed sources close to the railroads, not CP and CSX themselves. Unclear is whether CP will persist in attempting a merger deal.

A CP-CSX combination would create North America’s largest Class I railroad—$62 billion in market capitalization, $18 billion in annual revenues, and approximately 35,000 miles of track—eclipsing Union Pacific, currently the largest Class I, and BNSF, the second-largest. The combined carriers would also form an east-west transcontinental network stretching from Vancouver, B.C., to New York. Currently, only CN can say it’s a true east-west transcontinental.

The WSJ cited that a CP-CSX merger “would give rise to an industry giant with . . . an increased ability to exploit the North American energy boom. CSX-controlled rails run from the Midwest to refineries on the U.S. East Coast, but the railroad lacks direct access to North Dakota oil fields. CP does have access to North Dakota oil-loading terminals. A deal would potentially create a single railroad operator that could haul crude from oil fields all the way to fuel-making plants in the Northeast.”

CP “has staked much of its future on transporting oil from Canada’s energy fields in crude-by-rail shipments, an alternative to oil pipelines,” the WSJ noted. “It has said it expects one-third of its targeted revenue growth over the next four years will be driven by CBR and plans to invest heavily to expand its operations in Alberta and North Dakota to boost the effort. CP has said it expects to move about 200,000 carloads of crude in 2015, up from 120,000 this year and 90,000 in 2013. CSX’s rail network links to five oil terminals and six refineries along the eastern seaboard, which can be reached from the Chicago interchange within 48 hours, according to the company’s website—crucial assets in efforts to export North American production.”

“For years, Hunter Harrison has commented on the need to find a faster way to move through Chicago, an interchange used by six out of the seven major North American railroads,” added the WSJ. “Taking CSX under its fold would give CP more options to navigate to the U.S. Midwest, including a majority stake in the Indiana Harbor Belt Railroad, a major interswitching terminal [railroad] in Chicago. CP currently owns 49% of the IHB, while CSX and Norfolk Southern own the rest.”

At its recent shareholder conference, CP CEO Hunter Harrison, according to the WSJ, alluded to the company’s interest in a merger with a U.S. carrier, saying that it would “make sense.” However, he said, “You got to have somebody to dance with, and I don’t know anybody who wants to dance now. My experience in the past, and I’ve had too much of it, it’s more about . . . egos than it is true bottom line value to the shareholder.”