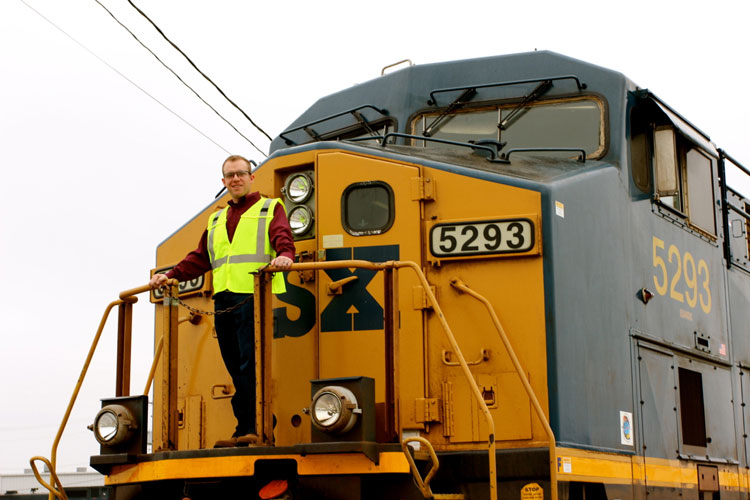 CSX Transportation has partnered with Furniture Row Racing and the No. 78 Chevrolet Impala driven by Regan Smith in NASCAR's top-tier Sprint Cup Series as an associate sponsor for the first half of the 2012 season.

The six-race sponsorship program is built around CSX’s “Play it Safe” highway/railroad grade crossing and pedestrian safety campaign to urge pedestrians and motorists to exercise caution around railroad tracks.

“Having an associate sponsorship arrangement with CSX Transportation along with a renewed agreement with Agro-Culture Liquid Fertilizers and an ongoing relationship with Chevrolet brings a new level of enthusiasm to our race team,” said Joe Garone, general manager of Furniture Row Racing. “The three corporations are leaders in their industry and we are both humbled and proud that they have chosen Furniture Row Racing as a means to enhance their branding and educational initiatives.”

“We are pleased to join with Furniture Row Racing and Regan Smith to deliver our important safety message that railroad crossings and tracks can be dangerous if you don’t obey the law,” says Cliff Stayton, Director-Community Affairs and Safety for CSX Transportation. “We are working together to make sure that everyone knows how to play it safe around railroad tracks. As an associate sponsor of the No. 78 Furniture Row Chevrolet and Smith, we’re working with one of the hottest up-and-coming teams in NASCAR to further deliver our message to motorists to never try to beat a train at a crossing, and to pedestrians to stay off the tracks. Public awareness is a key part of our safety campaign, and we’re thrilled to be working with Regan. Even though Furniture Row Racing is a one-car team, they always seem to find a way to be in the mix. I guess, to borrow an old railroad story, they’re the ‘little engine that could.'”

Smith and CSX kicked off the 2012 Sprint Cup season in rather unusual fashion. Smith, who calls the driver’s seat of his 850-hp NASCAR stock car home, got behind the controls of a CSX locomotive at the company’s Moncrief Yard, Jacksonville, prior to the start of Speedweek at Daytona. Smith and CSX said they launched a NASCAR season “dedicated to urging motorists and pedestrians to exercise caution around train tracks.” Added Smith, “We’re honored to get the opportunity to spread such an important message. Trains can’t stop on a dime. In fact, they can take up to a mile to stop.”

CSX’s NASCAR sponsorship program was developed and is being managed by Exit 10 of Baltimore, Md.