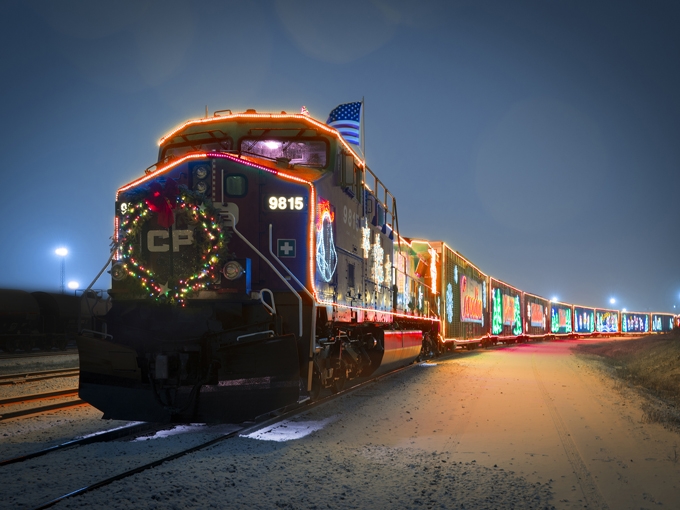 The Canadian Pacific (CP) Holiday Train program is ready to go for its 17th year, bringing with it food, cash donations and awareness to local food banks and food shelves across North America, the railroad announced Nov. 26, 2015.

The two brightly lit trains —a U.S. train and a Canadian train—kick off their tours in the Montreal area on Nov. 27 and 28 on their way to visit approximately 150 communities. The Canadian train travels west across Canada finishing its journey in Port Coquitlam, British Columbia. The US train visits communities in Quebec, New York, and Southern Ontario prior to traveling across the U.S. Northeast and Midwest, returning to Canada for its final shows in Saskatchewan and Alberta.

Since 1999 the annual Holiday Train program has raised over C$10.6 million and 3.6 million pounds of food. Each Holiday Train is about 1,000 feet in length with 14 rail cars decorated with hundreds of thousands of technology-leading LED lights and a modified boxcar that has been turned into a traveling stage for performers.

Each Holiday Train event features performances by professional musicians that include holiday-themed songs. There’s no charge to attend a Holiday Train show, but patrons are asked to bring a cash or non-perishable food donation. All money and food raised in a community stays there to help those in need locally. Again this year, legendary Canadian singer-songwriter Jim Cuddy will be on the Canadian train, this time joining his son, Devin.

“The Holiday Train is an amazing expression of old-timey Canadian joy,” said Cuddy, who was given the Order of Canada by Governor General David Johnston earlier this month. “To be on board an old, refurbished train and traveling through the nooks and crannies of this country is an awe-inspiring experience. As we pull into towns and cities along the way, we also see all the people assembled to celebrate and who are filled with the Christmas spirit—it is an incredible experience for those of us on the train.”

Also on the train is Montreal/Winnipeg band Chic Gamine who will play all the shows in Quebec, offering Francophone performances. Holiday Train veteran and award-winning country singer Kelly Prescott with Devin Cuddy and CP’s famed Holiday Train band will then take the stage for the rest of the Canadian Train’s tour before Jim Cuddy joins for the final leg.

The U.S. train will showcase one of Canada’s brightest country music stars in Kira Isabella, who was recently named by CBC as one of Canada’s top 25 artists under 25. Isabella, who won the 2013 Canadian Country Music Association “Female Artist of the Year”, will rock the stage with chart topping jack-of-all-trades Wes Mack, until the Doc Walker country legends come aboard in Chicago.

“I look forward to another great experience on the CP Holiday Train and am excited to engage with fans in person and on social media as we go from place to place,” said Isabella. “The CP Holiday Train is such a unique and amazing experience, benefiting people in need at this most important time of the year.”

Each year, fans of the Holiday Train follow its journey over social media, posting spectacular images of the trains in various cities and landscapes. Those who take photos of the train, holiday entertainment and the spirit of giving are encouraged to enter the “Capture the Spirit” photo contest for the chance to win an exclusive ride on next year’s train. Details about the contest are available on the Holiday Train Facebook page. Use #CPHolidayTrain.

The online schedule is now live at www.cpr.ca/holiday-train and lists which performers are stopping where and when.

To help make this year the best yet for local food banks, the Holiday Train asks fans new and old to follow the train on social media, invite their friends and family and spread the message about the importance of heart-healthy donations by using #HealthyDonations.